Over 90 coordinated antiwar actions took place Jan. 13-22, honoring Rev. Martin Luther King Jr. during the week of his birthday. “As Martin Luther King Jr. so correctly reminded us, the U.S. is ‘the greatest purveyor of violence in the world,’” stated the United National Antiwar Coalition in its call to action, citing a quote King made April 4, 1967 — exactly one year before his assassination. UNAC states: “Since WWII, the U.S. has initiated more than 60 military interventions in foreign countries.

“The U.S./NATO proxy war in Ukraine, whose origins reside in the 2014 U.S.-backed, fascist-led coup that replaced the elected Ukrainian government, brings the U.S. in direct confrontation with a major nuclear power, as does the U.S. provocation against China over Taiwan.” (unacpeace.org)

The tone of the protests was overwhelmingly anti-imperialist and anti-NATO — and was not targeting Russia. Moderate calls merely appealing to all parties to “negotiate now” were overshadowed by demands to “dismantle NATO” and for an end to the U.S.-instigated wars in Ukraine and all over the world.

Here are a few reports on actions from Workers World correspondents: 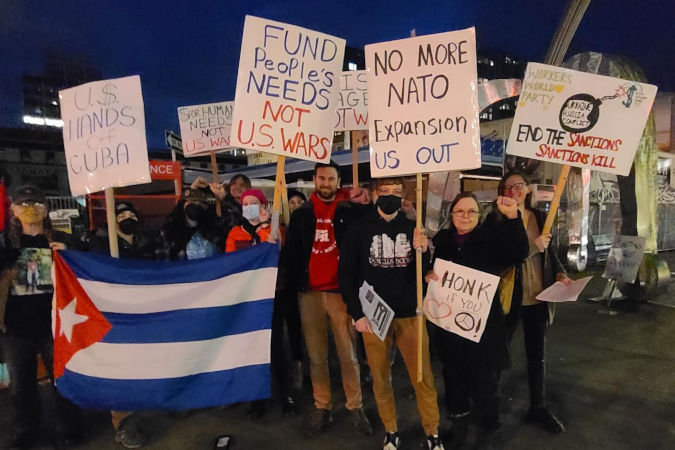 In Portland, Oregon, a coalition of eight anti-imperialist groups united to oppose capitalist wars, both at home and abroad. Not an hour goes by that the saber is not rattled at Russia, Iran, China or the other usual U.S. targets. The capitalist media would have everyone believe that workers are united with the ruling class in supporting Western militarism. Portlanders proved this was not so. Carrying signs with slogans such as: “Fight Racism, Not Russia” — something that would be considered sacrilegious by a lot of politicians on Capitol Hill — the anti-imperialists were met with much enthusiasm, including a number of honks from drivers.

One passerby, who was not at all interested in the protest, still found the time to state that the conflict in Ukraine began decades ago, in the 1990s, a viewpoint one would never hear on CNN.

The rally was preceded by an educational, put on by the coalition, that aimed to elucidate the intersection of peace and civil rights. Dan, with Veterans for Peace, gave a stirring speech on his experience as a draftee in Vietnam, including the horrific violence the U.S. military perpetrated against the Vietnamese people. He has given the same speech to high schoolers, shocking them out of the propaganda fed to the youth by draft officers and imperialist media. 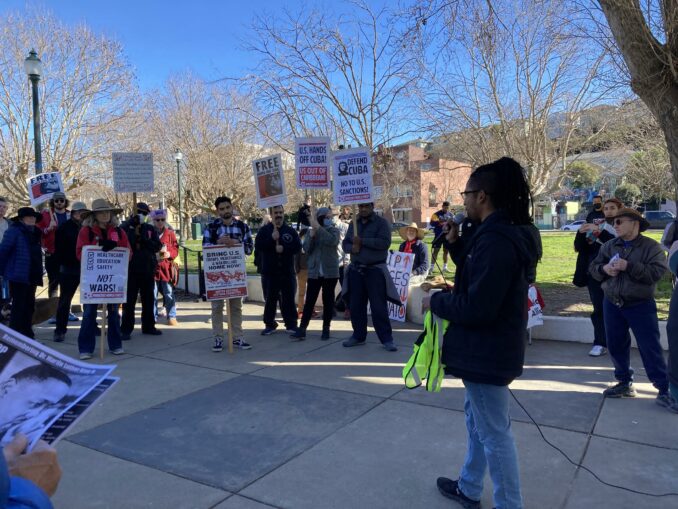 Nearly 100 people from around northern California marched through the heavily populated area of downtown Oakland’s Lake Merritt to demand funding for education, housing and health care not U.S. wars. The protest was greeted by honks and waves of support from people in cars and on foot, as the marchers chanted: “Cops here, bombs there! U.S. out of everywhere!”

The main rally was held after a short march to the Lake Merritt Amphitheater, an outdoor meeting space. Speakers included representatives from the Black Alliance for Peace, BAYAN, Palestinian Youth Movement, Workers World Party, Code Pink, Party of Communists-USA, and the Mobilization to Free Mumia Abu-Jamal. 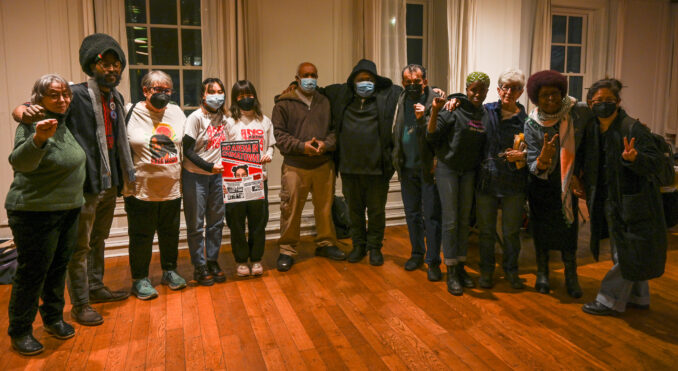 A Jan. 20 meeting in Philadelphia with the theme “Stop the Wars! Fund our Communities!” drew over 50 people to the William Way Center. Speakers emphasized that, in addition to untold death and destruction abroad, the cost of wars creates poverty in the communities. As U.S. tax money is wasted on Pentagon aggression, the underfunding of housing, health care and education causes harm to the youth, seniors and especially to communities of color.

Members and friends of the Workers World Party Buffalo, New York, branch hit the streets to educate people about the U.S./NATO role in the Ukraine war and to muster support for growing Buffalo’s antiwar coalition. They were able to make connections with members of the African migrant community and hear firsthand accounts of how U.S. imperialism impacts Africans, through extraction of resources, such as palm oil. Africa’s hunger crisis has been exacerbated by the war in Ukraine.

Thousands of Cleveland workers viewed a huge banner emblazoned with the slogan, “Fund human needs, not U.S./NATO wars!” Holding the banner on an overpass, while contending with fierce wind, local activists took their message to the Jan. 20 afternoon rush-hour crowd on Interstate-90. Many drivers honked in support. 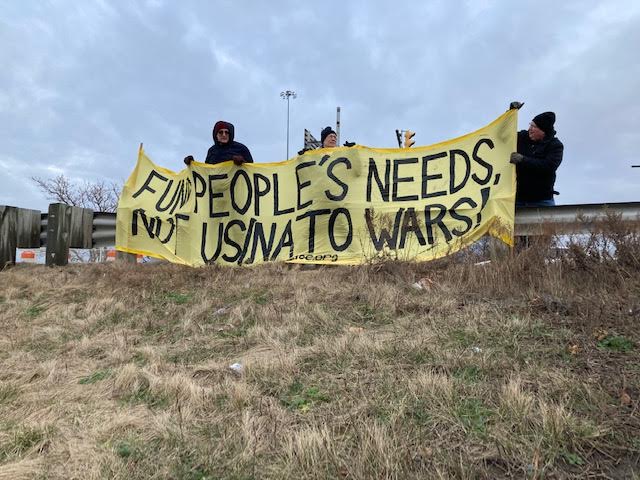 As the German government was negotiating with Washington about the U.S. pressure to send German “Leopard 2” tanks to the fascist-ridden regime in Ukraine, antiwar forces in Germany protested against further escalation of the war. In Heidelberg on Jan. 16, people braved rain and strong winds to rally downtown.

Among the speakers were Joachim Guilliard, who said: “We are out here today to protest strongly against supplying armored personnel carriers to Ukraine. We call on the German government and the governments of the other NATO countries to finally abandon their militarist logic, to stop trying to start a long war to defeat Russia — a war on the backs of Ukrainians, with Ukrainian soldiers on Ukrainian soil.” 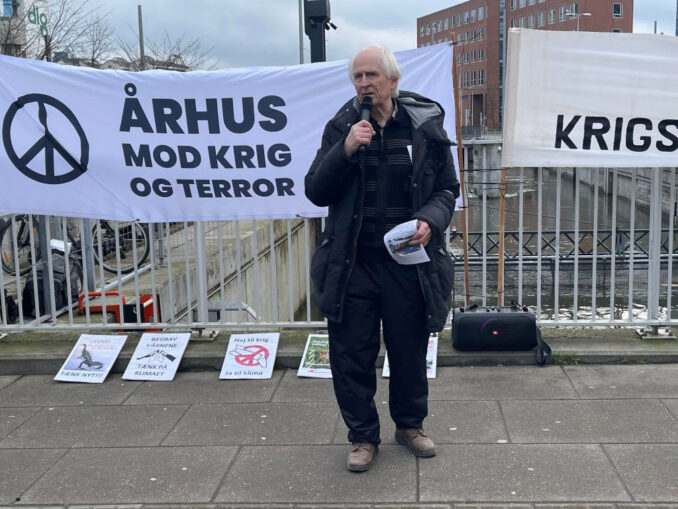 In Aarhus, Denmark’s second largest city, which is situated on a peninsula northwest of Copenhagen, some 3.5 hours by train from the Danish capital, the local branch of the antiwar movement said, “No to war and terror.” They had gathered in front of the library on the waterfront to protest that part of the harbor is being turned into a military zone for the next month, because the U.S. military will be unloading war materiel to be sent to Eastern Europe as part of the NATO expansion and war in Ukraine.

The working class is not as easily duped as the ruling class might believe; workers intuitively grasp that the narrative they are being fed is not to be trusted. The line that the U.S. is a defender of human rights and democracy is old and tired.

If there is any war in the workers’ interests, it is the class war against capitalism.