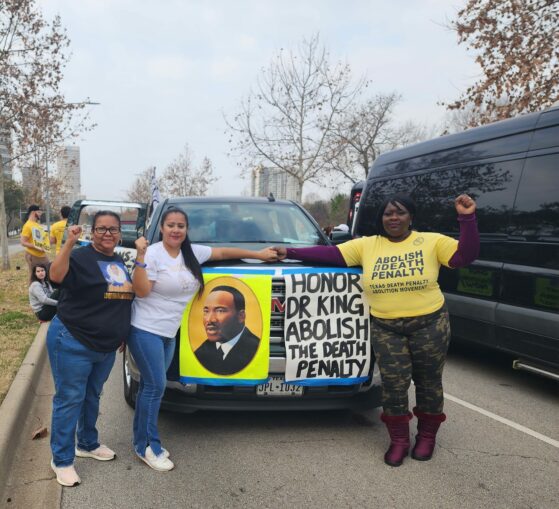 Activists with the Texas Death Penalty Abolition Movement participated in the Martin Luther King Jr. Parade Jan. 16, announcing to thousands lining downtown streets that the best way to honor Dr. King is to fight to end racist violence, including executions.

Houston’s Black Heritage Society held its 45th annual Original MLK Parade, and along with politicians and marching bands was this group of activists, who have fought for decades to stop Texas executions.

Young children with family members on death row handed out candy to kids watching the parade. Lee Greenwood, mother of Joseph Nichols, executed in 2007, came as she does every year. Vicky Reyes, mother of Juan Balderas, carried a banner for her son, along with his spouse, Yancy.

Vickie Curry, who supports her spouse George, carried signs supporting the women on death row. Letha Irvin, niece of the longest serving man on Texas death row, Harvey Earvin, brought three chidren and helped pass out information. The sign she brought was a crowd favorite. It read: I HAVE A DREAM — NO DEATH ROW!