In Portland, Oregon, nurses and community supporters rallied Jan. 20 in front of Providence Hospital corporate headquarters. Thousands of nurses in three Providence hospitals have been working since fall 2022 without a contract that would ensure basic safety standards and incorporate their union’s common-sense proposals. 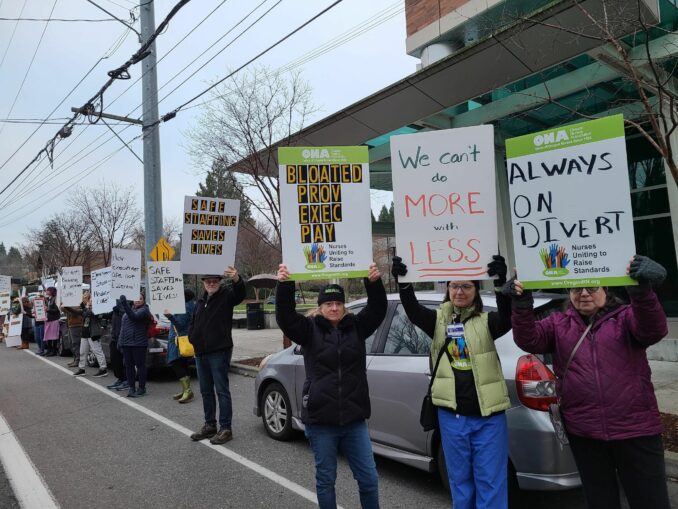 More than 2,000 members of Oregon Nurses Association (ONA) voted nearly unanimously to strike if necessary against Providence — one of the largest and wealthiest health care systems in the U.S., which reaps tens of billions of dollars in annual revenue.

At the rally nurses told the crowd they were forced to pick up extra shifts and work longer hours, and they were being assigned unmanageable and unsafe numbers of patients. They said they leave work feeling exhausted, physically and emotionally drained, because they can’t deliver the level of care patients deserve.

Nurse staffing turnover was a problem before COVID-19; since the pandemic, the problem has turned into a crisis. Last year 27.1% of active nurses quit. More than a third of those remaining said they would quit their job within the year.

ONA says Providence CEOs put profits and investments ahead of nurses, health care workers and patients. Some ONA nurses have volunteered their time more than 45 times over the last seven months to meet with Providence managers to negotiate a reasonable contract.

In addition to safer staffing levels, nurses are fighting for fully–paid family and medical leave, stronger patient safety standards, pay hikes and a fair compensation package that will help recruit and retain staff.