I work at a congregate shelter for people experiencing homelessness in Portland, Oregon, where the U.S. Department of Housing and Urban Development considers 5,228 people homeless. Of those, 3,057 are unsheltered in Multnomah County alone. My experience in working there has shown me that there is limited cooperation between homeless outreach programs and social service agencies, so the bureaucratic-financial mesh strangles any efficiency in getting people into housing through case management. 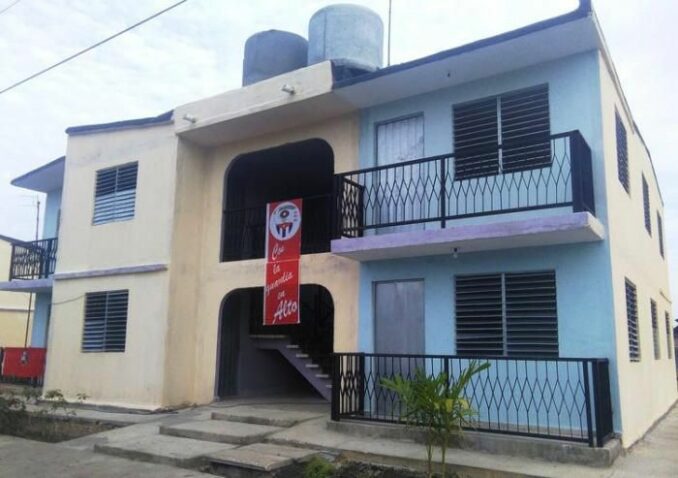 Despite the challenges created by the U.S. blockade, Cuba is building new housing for families. This building in Villa Clara is for mothers with three or more children. Credit: Freddy Pérez. Photo web source: Granma

The first step in case management is making sure someone has their documentation in order, such as their birth certificate, ID and social security cards, so they can legally apply for housing assistance or benefits. One of the many forms of exploitation and oppression homeless populations face is that they are constantly subject to identity theft and loss so that many people coming into shelters lack necessary identification.

Depending upon where homeless individuals are from, some states even have a built-in “Catch-22” to prevent them from obtaining housing. Adding to their oppression, they must order a birth certificate, but they need a state ID to do so; and to get an ID, a person needs a birth certificate. Fees are attached to web portals that require a bank card, another barrier for the houseless population.

The U.S. government’s purposeful stagnation of these systems reinforces the situation whereby there will always be more homeless people outside of shelters than in shelters; and there will always be a high turnover rate in shelters, due to the inherent inefficiencies in the entire system. The federal government works hard to underfund these shelters and their associated programs, while officials overfund the police, who then act as agents of repression against the homeless population.

On top of this, the intersecting crises of addiction and mental health problems in this country worsen the situation and ensure that there will always be a homeless population to use and exploit for prison labor and to keep as an industrial reserve army of workers.

I have had a beautiful time attempting to help and getting to personally know and work with many people experiencing homelessness. It is wonderful to see the successes, when people get the help they need and things work out for them. However, there is always the reality that capitalism maintains a constant homeless population as a threat to workers. There is always a risk for those who fall through the cracks and fail at what the capitalist system demands of them.

It was a refreshing surprise to travel to Cuba in January as part of the 51st contingent of the Venceremos Brigade, which was made up of 73 delegates from across the U.S., who made the trip to show solidarity with the revolutionary island. We exchanged political ideas with the Cubans and willingly gave our voluntary labor in support of the Cuban Revolution. During our stay there, we spent much time traveling in both Santiago de Cuba and Camagüey, the second- and third-most populous cities after Havana.

Even while traveling or walking at night through different streets and alleys of the cities, I never saw anyone who was visibly houseless, but I saw one or two people who seemed a bit lost or may have been dealing with some level of distress. I saw a few people in central squares asking for money, but I never saw a tent or a sleeping bag.

I was curious about where there is homelessness in Cuba and if so, how it is handled, so I asked three Cubans who work for the Cuban Institute of Friendship with the Peoples (ICAP), who accompanied us, and a local person I met on the street, to share their perspectives. All of them said: “No one dies on the streets in Cuba.”

The resident of Santiago de Cuba said that if people are experiencing a housing problem, it’s rare that they have to sleep on the streets, because in Cuba everyone is part of a community. This is prescribed both through their country’s culture and the values of the Revolution. If someone is facing a dire situation, a neighbor will help them with a place to sleep. This concept contrasts with the rugged individualism at play in the U.S.

The ICAP representatives mentioned that there are still instances of homelessness in Cuba; many of them are due to people experiencing mental health problems. They said that there are shelters in place, where people can stay while applying for government grants to obtain a home. Police and qualified social workers go into the streets to see if there are any individuals without a place to stay; if they find anyone, they offer them a ride to a shelter.

The ICAP members explained that the situation is not perfect, and they stressed that the Revolution is an ongoing project. There are delays for individuals to go from a shelter to a home, as there are not many unoccupied homes in Cuba, due to the U.S. blockade. Washington’s hostile policy means housing development projects in Cuba are put on hold due to restricted access to building materials and resources.

By contrast, with the incredibly pronounced crisis of homelessness in the U.S., a shortage of unoccupied homes is not part of the problem at all. In 2018, Portland had 4,000 people experiencing homelessness, while 17,000 housing units were vacant.

In addition to those community shelters, we visited other facilities which help people who need it. While visiting a psychiatric hospital in Camagüey, we found out that Cuba’s psychiatric hospitals have the objective of reintegrating people with severe mental health disorders into society. All of these services are free and accessible, and so are community restaurants which exist throughout the country. These provide a service to people who are struggling, where they can obtain three balanced meals a day.

The state gives free assistance to ailing retired people, who may be struggling to make ends meet on pensions alone, with workers visiting them to aid with cooking, cleaning and other forms of care.

Finally, a three-tiered free, universal health care system focuses first at the neighborhood level and provides ambulatory care. The second level of medical care is given in the municipality. Then at the third level, there are specialized care centers in Havana. This medical system ensures that everyone, including those who may become temporarily houseless, has complete access to services which meet their health needs. No one dies on the streets in Cuba — because people can get the help and care they need.

Cubans told me that the attitude towards the homeless by the population is one of charity and generosity. The ICAP member scoffed when I asked if people have a tendency to ignore or be rude to those experiencing houselessness, as happens every hour in the U.S. In Cuba people help each other, and no one blames the individual for their situation. Homeless people are not a heavily marginalized group like they are in the U.S.; they are viewed as members of the same community in which they live.

Article 82 of Cuba’s revised 2018 Constitution even states that “the right of persons to decent housing is recognized.”

I was never shocked to hear about how Cuba deals with homelessness, because the humane socialist country prioritizes human needs, unlike the callousness shown to unhoused people in the capitalist U.S. Cubans who lose their homes and who are suffering from mental illness are viewed as members of their community, and they can obtain treatment for their medical problems and be fed.

The Cuban Revolution was founded with a love for people and the belief that there should be equity in society. The Cuban people have made an incredible effort to guarantee shelter and safety for all of its people, despite the hardships caused by the blockade.

The U.S., on the other hand, does not provide this kind of care for the houseless population. In fact, whatever systems do exist push many houseless people into cycles of chronic homelessness, while they face demonization and marginalization.

Since the number of empty housing units is disproportionately greater than the number of homeless people in many U.S. cities, giving the homes to the houseless population could solve the “housing crisis” overnight. As much as doing this is in the interest of the working class, it is in opposition to the interests of the ruling elite, who aim for the greatest profits from home sales and apartment rentals.

Look to the spirit of our Cuban comrades. Build a workers world, so no one dies on the streets! End the crisis: House the houseless now! Where people desperately need homes, a vacant apartment is a crime!

Danny O’Brien was a participant in the 51st Venceremos Brigade delegation to Cuba Dec. 27-Jan. 7.