Members of the 51st Venceremos Brigade were invited to an open-air meeting to learn about the passage of Cuba’s new Family Code — the most inclusive, progressive and revolutionary law in Latin America and, indeed, the world, because of who it protects. 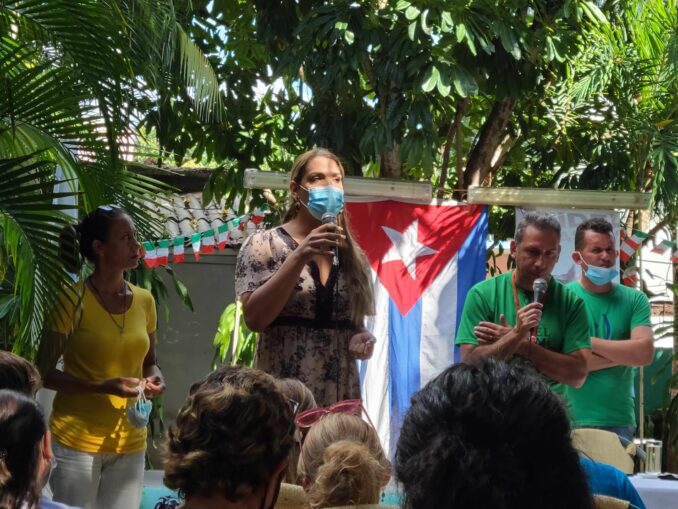 Speakers from Cuba’s trans community and CENESEX addressing the 51st Venceremos Brigade on Cuba’s Family Code Law and how it has changed their lives.  WW photo: Lyn Neeley

The Family Code, which was passed by referendum Sept. 25, updates the Cuban Constitution, defines what families can be and guarantees equality for all types of family structures.

Cuba is now one of 33 countries that recognize same-sex marriage and one of roughly a dozen where anti-LGBT discrimination is illegal.

Important provisions in the Family Code now legally protect families regardless of their makeup; people in vulnerable situations such as those with motor, sensory or mental health disabilities; unpaid youth, women, victims of domestic violence and LGBT people; and all races, genders and sexual orientations. The law gives support to institutions that protect families, home workers and youth; it provides rights to anyone wanting to adopt or raise a child, and to non-commercial surrogate mothers and provisions for family mediation.

At the meeting, a trans speaker told us, “We still face transphobia, but we don’t live with the fear of being assassinated or killed by bigots.” She said the blockade prevents trans people from getting safe hormone treatments, but Cuba is working to upgrade their own production of hormones. She told us, “we are influenced by U.S. Pride demos, and we have parades in Cuba like the ones you have.”

The Family Code not only protects the most vulnerable in Cuba, it protects the course of Cuban socialism. Writing the referendum involved the whole population throughout the processes of drafting and amending. It went through 25 revisions over the course of 3 ½ years.

After the referendum was introduced in 2019, Cuba carried out a nationwide process of education and outreach. Discussions took place in every workplace, organization, neighborhood and community group. To keep all Cubans well-informed, people took the discussions to rural areas and to those who do not have internet access.

The Family Code was approved by Cubans 2 to 1. A large percentage of Cubans, 74%, took part in the vote.

When a brigadista asked why some people voted no on the referendum, Cubans said that some people, often in more remote provinces, are attached to traditional family values or may be religious. They may have a hard time accepting that children may be raised by same-sex couples.

After casting his vote in the referendum, President Miguel Mario Díaz-Canel said: “There are people who, by faith or creed, have not understood that the Code doesn’t deny the type of family they defend but rather gives guarantees for other types of families.” (Resumen Latinoamericano-U.S., Sept. 26)

In Workers World Sept. 25, 2022, Minnie Bruce Pratt wrote, “Nearly 6.5 million Cubans took part in more than 79,000 meetings facilitated by the Federation of Cuban Women, the Committees to Defend the Revolution and other community organizations. Over 400,000 proposals were offered by the people; these were submitted to the National Assembly of People’s Power for evaluation, and a revised draft was returned to the people for further discussion and proposals.

“After reviewing all proposals and revisions, the National Assembly voted on the 25th version of the Code submitted, unanimously approving that and sending it to the referendum vote.” (tinyurl.com/y99fzd2e)

Cubans are very proud of what they call participatory democracy, the process they used to introduce and pass the referendum. It is an example to the world and a lesson in democratic centralism.

The Communist Party of Ireland wrote in the Socialist Voice about the Family Code: “The democratic process that Cuba has gone through is a lesson in democracy for the rest of us. Involving the population throughout the process of drafting and amending, the document creates a society in which voices are heard and taken into account. . . . Only through allowing the general population to voice their opinions and take part in the process of drafting and amending their country’s legislation can true democracy be achieved.” (tinyurl.com/4sxv8fym)

Lyn Neeley was a participant in the 51st Venceremos Brigade delegation to Cuba in December.