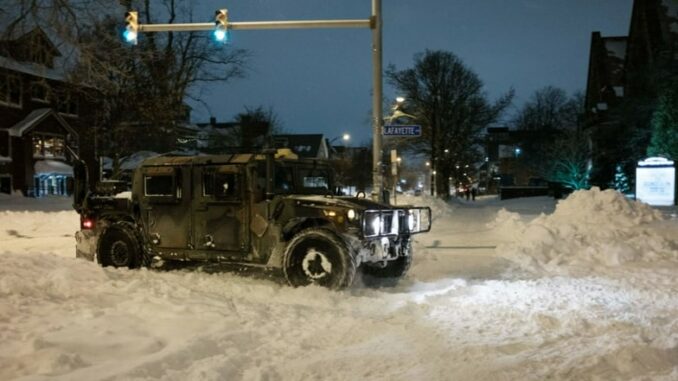 Military vehicle sits on Lafayette Avenue in Buffalo enforcing a
travel ban during the December storm.

The hurricane-force blizzard that ravaged Buffalo and reportedly killed 44 people in late December exposed in many ways the total failure of the capitalist system’s ability to handle a natural disaster.

With enormous resources available and the foresight of a few days to plan ahead, there is no reason why death tolls should have climbed as high as they have after these storms. But time and time again, from Buffalo to New Orleans, there have been dozens of examples of the U.S. government botching their response to natural disasters, on the local and federal levels.

In addition to the failure of disaster preparedness, the storm brought the social contradictions of capitalism to the forefront. White supremacy and racism form the bedrock of U.S. capitalism; in Buffalo — one of the most segregated cities in the country — the local government’s response to the disaster had this structural racism on full display.

Across the city, stories emerged of neighbors helping one another during the storm. One notable example was the story of solidarity between Bangladeshi and Black communities on Buffalo’s East Side.

Some 30 to 40 volunteers traversed each street by car and foot in their own and surrounding neighborhoods, doing door-to-door welfare checks and answering calls for assistance at specific addresses. Bangladeshi volunteers teamed up with other groups that were assisting in snow removal, like the religious Generation of Youth for Christ Ministries group.

Throughout the storm, the volunteers transported more than 500 people to various safehouses across the city, which had been established by the local Bangladeshi community. After conditions improved and electricity was restored to their residences, those needing assistance were given rides to their homes and supplied with hot meals, groceries and, in some cases, money.

Lovebirds Restaurant, one of the bases of operation for the Bangladeshi community’s efforts, continued to serve free hot meals in the days following the storm to those who needed them.

Despite all these lifesaving acts of solidarity, police imposed fines on these mostly Black and Bangladeshi immigrant volunteers for violating the driving ban, which the volunteers plan to appeal.

The driving bans were put in place far too late to prevent reducing some of the enormous loss of life from the storm; but once they were in place, they became a main focus of law enforcement in the area.

Rather than handing out tickets, these Bangladeshi community members were actually doing what the police and the National Guard should have been doing — attending to the needs of residents who lacked shelter and resources, who were left for dead by the government.

Acts of solidarity and mutual aid between Black and migrant communities that fill the void left by the inadequacies of the system are punished, rather than rewarded.

Another story is that of 27-year-old Jay Withey, dubbed “Merry Christmas Jay.” Stranded in his vehicle, Jay made his way to a nearby school, where he broke in to seek shelter. He then ventured out into the surrounding areas to find other stranded motorists and bring them to shelter.

Jay made his way into the school cafeteria and got food and other supplies for those he was helping. In all, he saved the lives of 24 people. Jay, who is white, was lauded by the local media and police as a hero. The Buffalo Bills football team even gave him two free tickets to the Super Bowl.

Saving the lives of two dozen people is certainly heroic. But the media did not have the same reaction toward Black residents of Buffalo, who went into nearby stores to gather supplies for themselves and their families to survive the brutal storm. Social media was in a frenzy with reports of “looting” — Mayor Byron Brown condemned the participants as “the lowest of the low.”

The media overemphasized that TVs and other expensive items were taken to make it look like looting, crime for crime’s sake, rather than actions taken for survival.

The reality is that Buffalo’s East Side is a historically neglected neighborhood and food desert. Resources are scarce, and the Black community is almost always the last to receive any kind of assistance or service from the local government in cases of storms or other disasters, while at the same time bearing the brunt of police violence.

When storms like this happen, people need to find supplies to survive one way or another. The fact that expensive items like TVs are taken are but a result of the desperate economic conditions imposed on poor and working-class people.

If the city truly wants to stop “looting” or crime in general, bringing down the full force of the law on an already over-policed community is not going to do it. The only way is to make sure the needs of the people in the community are met and that the necessities of survival are available to all. This is essentially what the Bangladeshi volunteers were doing. That’s what they were punished for. 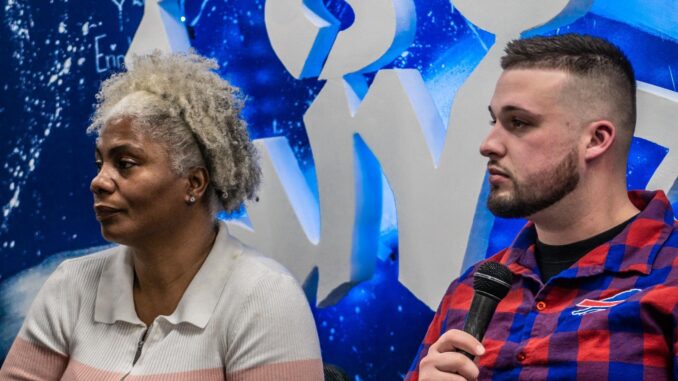 Police accountability activist Cariole Horne on the left, “Merry Christmas” Jay Withey on the right. Both were out helping people in their community during the December 2022 storm in Buffalo. Police praised Withey as a hero, but arrested Horne. Credit: Photographer unknown, taken from Shaimaa Akil’s facebook page.

A history of police misconduct

Local police-accountability activist and former Buffalo police officer Cariol Horne was also arrested during the recent storm. As she was driving down Bailey Ave., she came across Buffalo police officers who had pulled over a vehicle and forced the people they were investigating to sit in the snow, risking hypothermia, rather than placing them inside a police car. When she approached the officer to advocate for the safety of the people placed in the snow, the officer threatened and then proceeded to push her.

The incident ended with Cariol Horne being placed under arrest and charged with obstruction, refusing to move and harassment in the second degree. Her booking remarks listed her crimes as “pointing a finger at an officer in a public place.”

This is not the first time Horne has been a target of the Buffalo Police Department for advocating for those facing violence and mistreatment at the hands of BPD. Horne is well-known by police and people in the community for an incident in 2006, when she was still a member of the police force. Horne, who is Black, stepped in when a white officer started beating and choking a person, who was crying out “I can’t breathe.”

For intervening in a racist police attack and potentially saving this man’s life, she was fired from the police force just months before receiving her pension. Horne has been exposing abuses of the Buffalo police department ever since and has been made a target for this — even during the brutally cold storm.

The bottom line is that as long as this country continues to maintain a capitalist economy based on putting profit above all else, we can expect every storm and disaster in the future to be handled with the same callous neglect, including racist treatment, with the most vulnerable in our class left to die.

The capitalist state’s primary role is to protect private property and police the people. It’s up to working-class and oppressed people to organize for immediate survival during disasters and to organize to end the capitalist system that perpetuates poverty and suffering for all.