United States and South Korean officials are ramping up provocations aimed at the Democratic People’s Republic of Korea in the north. The two capitalist countries have announced they plan to hold official meetings in February, known as “tabletop exercises,” to discuss military options to use against socialist North Korea. This is in response to the DPRK’s recent testing of short-range ballistic missiles. 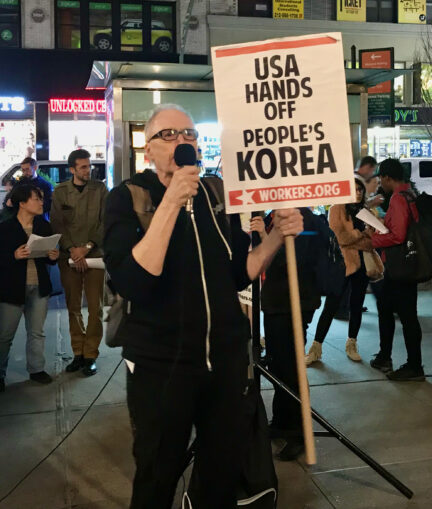 On Jan. 12, right-wing South Korean President Yoon Suk-yeol publicly raised the idea of using nuclear weapons against the DPRK: “It’s possible that the problem gets worse, and our country will introduce tactical nuclear weapons or build them on our own.” (New York Times, Jan. 12) Such a threat had not been made by a South Korean official since the country signed a Nuclear Non-Proliferation Treaty in 1991.

U.S. and allies: the real threats to Korean people

Shortly after Yoon assumed office on May 10, 2022, the U.S., South Korea and Japan reinstated joint ballistic military exercises, which had been halted in 2017. The three countries then conducted war games off the Hawaiian coast in August 2022. (Reuters, Aug. 15, 2022) President Yoon vowed to “normalize” military operations as soon as he took office.

Yoon’s election, which narrowly defeated the more moderate Moon Jae-in, was celebrated by U.S. war hawks. He had been a lifelong prosecutor with little political experience, and is an admirer of the “free market libertarianism” espoused by Milton Friedman.

Yoon spearheaded a viciously anti-communist and anti-feminist presidential campaign. When he announced his candidacy in June 2021, Yoon did not belong to a political party – but the next month he joined the ultra-rightist People’s Power Party. As an ardent male chauvinist, one of Yoon’s first proclaimed priorities was to abolish the Ministry of Gender Equality and Family.

Consistent with his anti-communism and “libertarianism,” Yoon is vehemently anti-worker. He was preparing to bust a truckers’ strike in December, ordering the strikers back to work not long before it was settled.

The Western corporate media is silent on Yoon’s sordid background, and it falsely portrays the DPRK as the “aggressor.” The U.S., South Korea and Japan have been threatening the DPRK’s sovereignty for the last 73 years. The socialist North has defended itself with courage.

North Korea’s leaders have every reason to distrust U.S. government officials and their allies in the region and to shield themselves from imperialist aggression. Every U.S. president since 1945 has been antagonistic toward the socialist country, including Donald Trump and Joe Biden.

A 2018 meeting between Trump and DPRK Marshal Kim Jong Un appeared to be conciliatory. However, a new book written by New York Times writer Michael Schmidt, entitled “Donald Trump v. the United States: Inside the Struggle to Stop a President,” claims that in 2017 Trump raised the idea of using nuclear weapons against the DPRK and “blaming it on another country.” (nbcnews.com, Jan. 12)

As White House officials and corporate media reporters spread fabrications about North Korea, it is crucial for anti-imperialists to counter these falsehoods with facts. It is important to talk to workers and oppressed people in the U.S. who are subjected to Washington’s narrative; the brutal history inflicted upon the Korean people by imperialist invaders must be explained.

In his book “The German Ideology,” Karl Marx famously wrote: “The ideas of the ruling class are in every epoch the ruling ideas, i.e., the class which is the ruling material force of society, is at the same time its ruling intellectual force.” This concept applies to the capitalist class’s hostility to socialist North Korea, which is spread through the corporate media.

Imperialist propaganda against North Korea is so strong that even some people on the left, who normally hold anti-imperialist positions, avoid defending the DPRK. The science of Marxism-Leninism, however, teaches communists to defend every socialist revolution against the yoke of capitalism, as well as every struggle for liberation against colonialism and against all forms of oppression.

The people of Korea want peace and reunification, but U.S. imperialism has been the major obstacle to that development. The U.S. still has nearly 30,000 troops occupying South Korea. This is illegitimate, because Washington broke its promise to withdraw U.S. troops after signing the 1953 Armistice Agreement, in which the U.S. had pledged to do so.

U.S. forces have continued to terrorize the Korean people ever since then, through the use of sanctions and military exercises that threaten war. The DPRK is justified in defending itself in any capacity that its government asserts is necessary.

U.S. troops out of Korea!