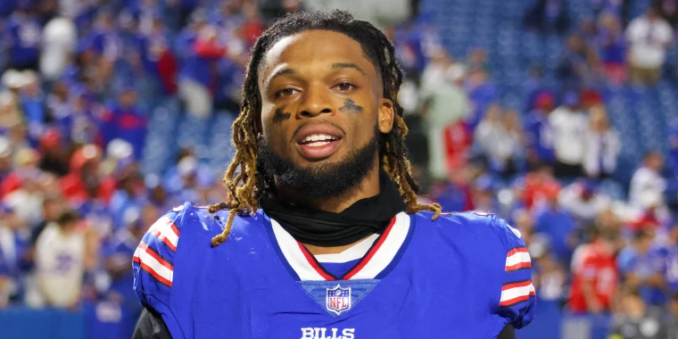 Bulletin: As we go to press, Hamlin has returned home to Buffalo.

Unprecedented tragedy struck at the Bills-Bengals NFL game in Cincinnati Jan. 2, when 24-year-old Buffalo Bills safety Damar Hamlin collapsed suddenly, following a tackle during which he was hit hard in the chest by the helmet of Tee Higgins, a Cincinnati Bengals wide receiver. After falling down, Hamlin stood up and almost immediately fell backward as he suffered a cardiac arrest.

A standby ambulance was promptly backed onto the field, and EMTs administered lifesaving CPR, restarting Hamlin’s heart after nine minutes of strenuous effort. The player was then rushed to the University of Cincinnati Medical Center, where he was sedated and put on a ventilator.

CNN reported Jan. 7 that Hamlin is still in intensive care and in critical condition. He regained consciousness and does not appear to have suffered any cognitive loss. His breathing tube was removed, and he is now breathing on his own. He is verbally communicating with his family members, teammates and medical team and posting messages on social media.

During the CPR efforts, players from both teams gathered around Hamlin, and the air of toughness that typically surrounds U.S. football games dissolved, as players held hands and openly wept at the sight of their stricken colleague. Commentators were at a loss for words, and media coverage repeatedly broke for commercial breaks, while everyone awaited word on the status of the game. After the ambulance was driven off the field, word came: The game would continue after a five-minute warm-up.

The players did not comply. In a defiant workplace action, traumatized players from both teams walked off the field and called their NFL Players Association representatives.

The head coaches of both teams met briefly on and off the field, apparently agreeing that the game could not continue. An hour after Hamlin’s collapse, NFL Commissioner Roger Goodell made the call that anyone with a conscience would have made immediately — the game was “temporarily” halted and then canceled. The League eventually stated on Jan. 6 that the game will not be rescheduled.

The NFL leadership has since claimed that they never had any intention of letting the game continue, and that the five-minute warm-up call was made by on-site officials merely going by the book. That claim is contradicted by ESPN, which issued a statement that their commentators were simply relaying information given to them directly by the NFL.

The League’s claim is also shown to be a lie by their repeated disregard for the safety and well-being of its players in favor of maintaining profits and executive salaries. For instance, the League’s decades of downplaying and outright denying the dangers posed to players by chronic traumatic encephalopathy (CTE), for instance, is well-documented. A 2016 settlement awarded $1 billion to affected players, but to date only 6.5% of that has been paid out.

Former NFLPA President Dominique Foxworth, now an ESPN analyst, pointed to the situation surrounding Hamlin’s collapse as illustrating the necessity of players having collective bargaining. On numerous talk shows, Foxworth harkened back to NFLPA negotiations during the NFL’s over four-month lockout of players in 2011:

“I remember going through CBA negotiations, and I remember fighting for health and safety advancements and fighting for a higher salary cap. I also remember some of these people in the media — who were outpouring and caring last night — they were calling us greedy. Some of these same fans were like, ‘Get back on the field.’

“Maybe it’s uncomfortable for people to hear me talk about CBA negotiations in times like this, but it really matters because it changes their lives. As we were reminded last night, there is no limit on the risk for the players; but there is a salary cap on what they can make. I understand how it can be unseemly to talk about this right now, but it reminds me so much that everyone who’s benefiting from this game, there seems to be no cap on how much they can enjoy and appreciate.” (Fox News, Jan. 3)

One is reminded of incidents at an Amazon warehouse in Etna, Ohio, where in 2019, two workers, Thomas Becker and Billy Foister, had heart attacks a few months apart. In both cases, Amazon management failed to react in time to provide lifesaving care, and both workers died. After these tragedies, workers on the floor were told to promptly get back to work. (Guardian, Oct. 18, 2019)

The difference? NFL players have a union; Amazon workers do not. Hopefully NFL players will take Damar Hamlin’s plight as a call to action and fight for a safer workplace and better disability benefits.

Organized workers’ power saves lives. When we fight together, we win!