“You are demanding that this city will respect the dignity of labor. So often we overlook the work and the significance of those who are not in professional jobs or those who are not in the so-called big jobs. But let me say to you tonight, that whenever you are engaged in work that serves humanity and is for the building of humanity, it has dignity, and it has worth.”

Following 2022’s year of worker uprisings, solidarity is crucial for consolidating union victories, which the bosses have their sights trained on to undermine. From Amazon to Trader Joe’s to Starbucks, the overall anti-union strategy is for management to drag its heels and refuse to sit down and bargain with workers who have won union representation. 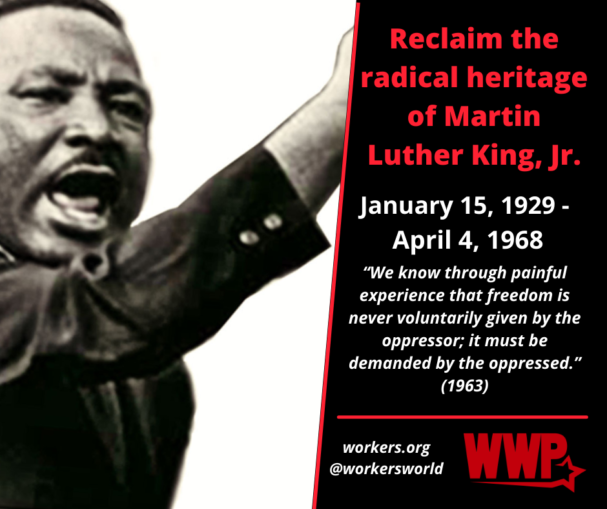 This delaying tactic operates side by side with rampant harassment and intimidation. One case in point: At the beginning of November 2022, the employees of the Manhattan Starbucks Roastery decided to strike in response to abhorrent working conditions, amidst a bedbug infestation in their store. After 30 days of picketing, negotiating with management and rallying, on the evening of Dec. 9, 2022, the workers decided to end their strike.

Once the picket line ended and it was time to return to work, another set of issues emerged. While management agreed to and kept up with “health meetings,” by the newly won Health and Safety Committee, to track cleanliness and launch inspections as requested, the committee seemed to be more lax on providing proof of their findings than when they had to report to lawyers.

Combined with the hypervigilance of the newly returned staff, there’s still a sense of unease when moving through the Roastery. Employees no longer use their lockers for storage, but instead use the clear “comforter” bags provided by management or, alternatively, wrap their belongings in trash bags.

But due to the overwhelming nature of a Manhattan Starbucks business during the holiday season, no one has time to ponder the subconscious paranoia of this new normal. And even if the Health and Safety Committee were to report no bedbug sightings for weeks, it’s difficult to say enough trust has been established for the workers to return to using their lockers.

Starbucks bosses have exploited the fact that not all workers went out on strike, and they did everything possible to pit workers against each other. This includes verbally disparaging the picketing employees, ignoring them altogether or actively disparaging Starbucks unions.

The head organizer of this strike, Ley Kido, told WW that one of the main reasons so many workers voted against striking was the fear of retaliation, which was not unfounded. Employees have faced threats of investigations from higher-ups over food mark-outs, and they have been chastised for dress codes. It’s gotten to the point where the Roastery workers have become suspicious of certain practices, such as being encouraged to take old food home, in fear of later being persecuted for stealing from the company.

When talks of returning to work occurred, many chose to leave, as they considered being asked to expose themselves and their loved ones to infestation in exchange for an insufficient wage to be the final straw. Despite this, those who chose to return to work continue their organizing efforts, making sure employees learn the policies and their rights as employees to prepare for any adversity. They make sure to prepare their group for confrontations with management and to act as each other’s worker representative when needed.

Union Roastery activists have joined forces with other organizations to further amplify their voices, and they continue to think of ways to reel in more people to lean on, in this ongoing struggle for health and safety. Management is counting on the fact that anti-union forces can legally start a petition to decertify the union one year after a successful union vote. For the Roastery, that anniversary is April 1, just around the corner.

Solidarity for this campaign is therefore crucial and can take many forms. If you live in New York City, one thing supporters can do is go to the Starbucks Reserve Roastery and order coffee. When the barista asks for your name, respond by saying you want your coffee “union strong.” When the barista yells out who the coffee is for, the whole store will hear support for the union.

When we celebrate Martin Luther King Jr. Day, rarely do we hear of his fierce support of laborers and their struggle for respect. This January the Starbucks Roastery Reserve is a shining example of demanding the dignity of labor. And as the workers’ struggles continue, Workers World Party will be prepared to support their efforts as we have so steadfastly done before.