While the huge social, economic and political problems of Haiti have slipped out of the news, if anything they have intensified over the past few months. 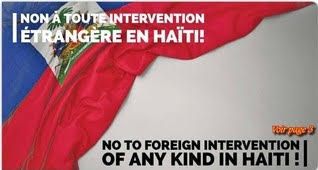 According to Helen La Lime, Special Representative of the United Nations Secretary-General for Haiti and Head of BINUH (U.N. Integrated Office in Haiti), “Close to half the population are food insecure, with some 20,000 people facing famine-like conditions; 34% of schools remain closed.”

She spoke at a Dec. 21 Security Council meeting to consider what additional sanctions the U.N. should impose on Haiti.

La Lime was a high-ranking U.S. diplomat before she joined the U.N. in 2018. She previously served as the U.S. ambassador to Angola.

La Lime claimed that there were 15,000 cases of cholera spread throughout the country, which is an admitted undercount. Cholera is spread by a lack of sanitation and untreated water, which poverty has imposed on Haiti.

Ignoring the 13 years and $8 billion the U.N. disbursed during its last occupation of Haiti, La Lime’s solution to Haiti’s misery was more of the same.

In her report to the Security Council, delivered by video from Port au Prince Dec. 21, La Lime asserted: “The HNP [the Haitian National Police] continues to be under-resourced and insufficiently equipped to address the enormity of the task ahead. The HNP needs assistance in the form of a specialized force, as outlined in the Secretary-General’s letter of 8 October.” (tinyurl.com/bdfawj3b)

The newspaper Haïti Liberté points out that such “assistance” would require foreign military boots on the ground. 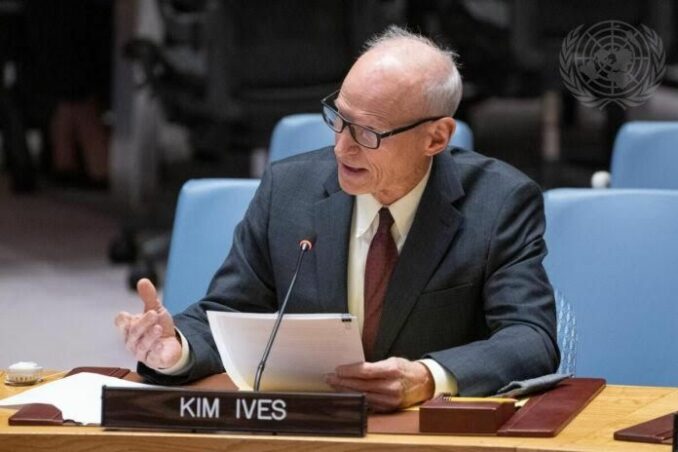 He pointed out that Haiti had suffered three coups d’état in the past three decades — 1991, 2004 and most recently 2021. In 1991 and 2004, the U.N. intervened militarily, “cementing in place an unjust and illegal status quo. The victims of these coups — the Haitian masses — were the ones policed, repressed, terrorized, demonized, sexually violated, politically bullied and economically sanctioned.”

Ives addressed the “need” that the BINUH, the U.S. and Canada feel to control the “gangs,” which have proliferated in Haiti. He stated, “the previous two U.N. military interventions have so weakened the Haitian state” that the growth of groupings engaged in extortion, kidnapping, rape and more was unhindered. The masses responded with the creation of “vigilance brigades.”

Ives points out: “These self-constituted defense committees are the very embodiment of self-determination and organic community action and response.”

He pointed out that the blockade of the Varreux fuel port was not key to the economic disaster in Port au Prince and that de facto Prime Minister Ariel Henry was appointed by the Core Group — ambassadors from the U.S., France, Canada, Germany, the U.N., Spain and Brazil — and has no political legitimacy in Haiti.

Ives ended his report with a plea: “The Haitian people, acting with full sovereignty, must be allowed to sort out their own problems.”

Vassily Nebenzia, Russian ambassador to the U.N., began his presentation, immediately after Ives spoke, by saying, “We also thank American journalist and editor of Haïti Liberté, Mr. Kim Ives, and appreciate his rather interesting and unbiased view of the situation in the country.”

It was the Russian delegation that got the invitation extended to Haïti Liberté.

Nebenzia asserted that Haiti’s “chronic crisis of statehood, socioeconomic collapse and decomposition of legal institutions to a large extent are the results of protracted external ‘political engineering.’ The historical responsibility for this rests not only with Washington, which has repeatedly interfered in Haiti’s internal affairs, including by armed force, but also with Paris.” France extorted payment for the so-called “property” — the enslaved people — the French enslavers lost.

Nebenzia stated that the “former colonial powers have changed their methods, but their colonial approaches have remained the same; interference in Haiti’s internal affairs occurs by means of imposing alien solutions.”

He noted that “the insights of Mr. Ives that he shared today should be the reason for us to be even more careful with sanctions. Otherwise, sanctions risk affecting not the criminal elements but the opposition activists.”