Nurses at the three sites of the Alta Bates Summit Medical Center campuses in Oakland and Berkeley went on a 10-day strike from Dec. 24 until the early morning of Jan. 2. They took this action after 97% of them voted to reject their bosses’ last-minute contract offer. The East Bay registered nurses, who are members of the California Nurses Association, are the only CNA bargaining unit steadfastly refusing to ratify the contract offered by Sutter Health.

These nurses have been working on an extended contract since January 2020. This reporter spoke with several strikers, including Thorild Urdal, a 40-year, labor and delivery nurse, who explained that they were not able to vote on the contract extension. And when a settlement was finally reached statewide, “CNA staff encouraged one facility after another to settle and, in fact, pushed for a settlement here … which included a two-tiered pension.” 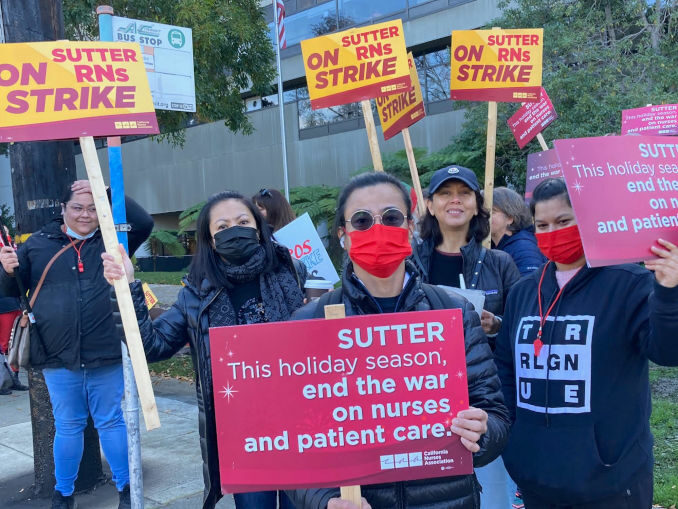 Urdal explained that this meant new nurses would not have the option of getting a “true pension.” She said nurses on their bargaining team did not like the “best and final offer” at all. “We have only had a pension for about 20 years, and it was a big fight for us to get it.” The bargaining units which ratified this new contract lost pension rights for nurses hired after the contract ratification.

‘We all have to fight back!’

The striking nurses held rallies every day during the strike. On Christmas Eve, a vigil was dedicated to patients and staff who had lost their lives due to COVID-19. Ann Gaebler, a veteran Neonatal Intensive Care Unit nurse, said: “Many, many lives were lost in the pandemic. … We are out here trying to correct some of the conditions that led to the deplorable situation that people faced. It’s not a good thing what is going on; and somebody has got to stand up and fight for us, and that somebody is all of us.”

Later that week, this reporter spoke with Eric Koch, an Alta Bates nurse on the negotiating team, at the makeshift outdoor “nurses’ lounge.” Koch talked about the tragic “hemorrhaging of staff” since the pandemic: “We have lost over 70% of nurses since the pandemic started. Most of the nurses are leaving not only because of the bad conditions, but we can go down the street to Kaiser (in another California hospital system) and make a minimum of 15% to 20% more.”

Koch says he believes Sutter Health’s ultimate goal is to close the Ashby campus of Alta Bates. “Sutter Health creates a monopoly wherever they go. They buy hospitals, combine them and then shut ancillary facilities down.” These hospitals can then charge exorbitant rates and greatly increase their profits. 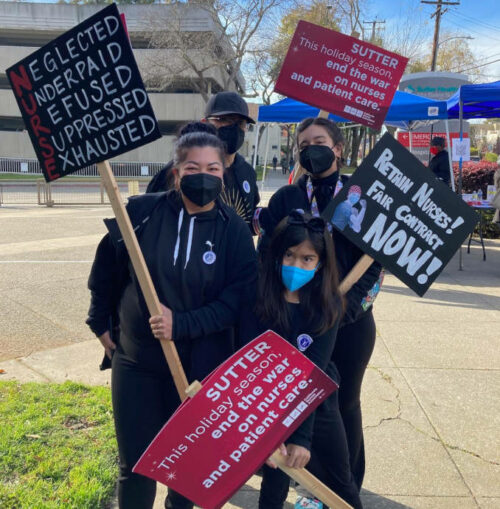 A union-friendly DJ provided nonstop music during the nine-day strike, despite the rain. Punctuating the music and dancing on the picket line was the constant honking of passing cars, showing drivers’ support for the only hospital in Berkeley and in solidarity with the courageous fight of the nurses for a just contract.

Many young and new nurses participated in the strike. Lilliam Morrison, an Alta Bates nurse hired in September, explained that she was on the picket line because of all the support the union and other nurses have given her. “We do the hard work here,” she said.

Many nurses brought their children, their parents and other family members to the picket lines. A contingent of teachers from the Oakland Education Association joined the strikers in Berkeley almost every day.

On New Year’s Day, a rally was held at 11 a.m. to support the striking nurses. Speakers included nurses on the bargaining unit and supporters from local unions, including teachers from the OEA. Donna Woodruff, negotiator for nurses at the Alta Bates Herrick campus, said, “I want Sutter to know that the bargaining team is ready, anytime Sutter wants to come to the table and bargain with us.” Sutter suspended bargaining until the beginning of 2023.

“We must continue to stand shoulder to shoulder,” said Jemila Pereira, another nurse negotiator. “Bargaining for 18 months is absolute nonsense. It is all about greed, maltreatment, and we are not having it. We are doing things now that will benefit the new nurses that are coming. We may never meet them, but we are still planting the tree.”

This amazing strike was conducted as a rank and file-led effort against Sutter Health, a multimillion-dollar hospital company. It was held despite last-minute pressure by Sutter Health and CNA staff to accept what nurses criticized as a bad contract. Nurses ended their strike and entered Alta Bates Hospital on Jan. 2 as a large group. They promise to continue fighting and organizing for a fair contract, even if that effort means future strikes and labor actions.