Workers across Britain have been engaged in wave after wave of strikes. Since summer, workers in multiple industries have hit back against massive economic and social service attacks. 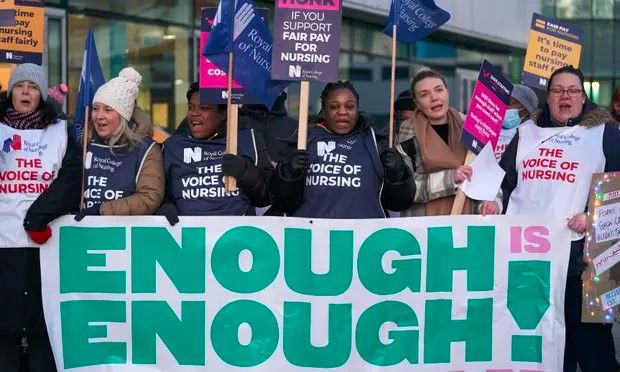 Consumer inflation hit a 40-year high of 10.1% in July. With median wages increasing by 7.2% in the private sector and only 1.5% in the public sector, workers have been unable to keep up with the cost of living. Government cuts in social programs have resulted in a revolving door of prime ministers.

Thousands of workers organized by the Trades Union Congress marched through central London June 18 over the cost-of-living crisis, demanding higher wages. The Rail, Maritime and Transport Workers union has launched a series of strikes since then; and postal and airport workers have followed suit.

In their first-ever walkout Dec. 15, 2022, around 100,000 National Health Service nurses struck at 76 hospitals and health centers in England over wages. The strike resulted in cancellations of thousands of nonurgent operations and tens of thousands of outpatient appointments in the state-funded health system.

Following suit, more nurses in England, Wales and the North of Ireland struck over wages and patient safety concerns Dec. 20. Members of the Royal College of Nursing took part, raising that continuous low pay causes chronic understaffing, which puts patients at risk. Additional strikes may follow in January if talks between union negotiators and the government fail to resolve the issues.

The two days of job actions were unprecedented in the British nursing union’s 106-year history, but RCN said it has no choice as workers struggle to make ends meet. The nurses want a 19% pay increase to compensate for a decade of wage cuts and staff shortages. Yet, NHS officials are only offering a 4% increase, and they refuse to discuss more. A Dec. 20 nursing strike was avoided in Scotland, when the government agreed to hold talks on pay.

Around 10,000 ambulance workers in England and Wales struck on Dec. 21. Their union includes paramedics, call handlers and emergency care assistants. Health workers who are part of the 460,000-member GMB (general trade union) struck again Dec. 28. And a planned ambulance service workers strike was avoided in Scotland after members were offered a new minimum hourly rate.

There is a high level of support for the nurses and NHS staff. A recent poll by the Independent found that two-thirds of respondents would back the NHS nurses, including their taking more strike actions in 2023 if pay demands are not met. A majority of those polled expressed support for actions by rail workers, bus drivers, postal workers and teachers — including future strikes.

Pat Cullen, General Secretary and Chief Executive of the RCN, announced that nurses will go on strike again Jan. 18 and 19 in England, unless pay talks are opened. More hospitals are expected to be impacted than in December. GMB has called for a new coordinated walkout Jan. 11. And in Scotland, NHS workers rejected a 7.5% pay increase offer and are expected to announce strike dates as well.

“The government had the opportunity to end this dispute before Christmas, but instead they have chosen to push nursing staff out in the cold again in January,” Cullen said. “The public support has been heartwarming, and I am more convinced than ever that this is the right thing to do for patients and the future of the NHS.” (BBC News, Dec. 23)