Buffalo is reeling from its worst snowstorm in a generation. From Dec. 23-25, Western New York state was ravaged by a “bomb cyclone,” which brought hurricane-force winds, subzero wind chills and over 50 inches of snowfall to the region. But Winter Storm Elliot is as much a social disaster as it is a weather one. 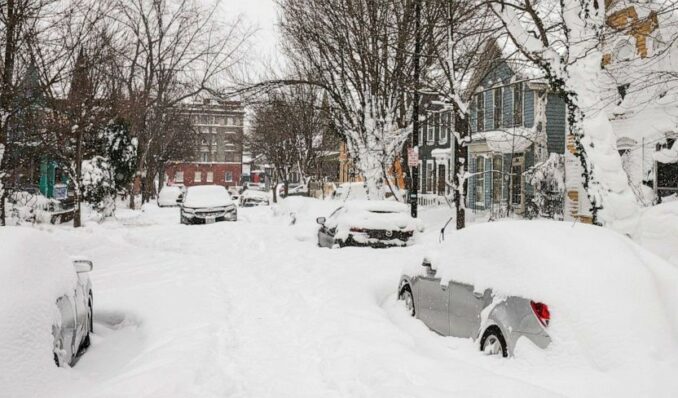 At the time of this writing, at least 40 people in the Buffalo area have died due to the storm, a majority of them people of color. This surpasses the death toll of the infamous “Blizzard of ’77,” which killed 28 people across New York state.

This storm was not a surprise; as early as Monday, Dec. 19, the National Weather Service in Buffalo announced that a powerful storm was on the way for the holiday weekend. By Dec. 21, they called for “a once-in-a-generation storm” to arrive in the region Thursday night into Friday morning. Yet when a travel ban was finally issued at 9:30 a.m., Friday, Dec. 23, many workers were already at their jobs. So despite days of warning, many people became stranded in their vehicles on impassable roads, leading to at least four deaths.

Others succumbed to the brutal cold and hurricane-force winds. The bodies of 17 people have been discovered in snow drifts. Thousands of families have been left without heat and electricity, as falling trees brought power lines down. Nine of the people who died were in homes with no heat. Snow drifts up to 12 feet have severely limited access in and out of some houses, blocking residents inside.

The city failed to make adequate emergency housing provisions. And now, days after the storm, racial disparities are evident. In Kenmore, with a majority white population, snow plows have been up and down streets for days. In predominantly Black parts of Buffalo, like the East Side, many residents still can’t leave their homes, and 12-foot snow drifts still cover windows. (Washington Post, Dec. 29)

In the middle of such human catastrophe and the utter failure of the physical and political infrastructure, Mayor Byron Brown found his footing in grandiose moral indignation over an uptick in so-called “looting,” calling those who reappropriated resources in their own communities, “the lowest of the low.”

To the ruling class, there is nothing more contemptible than a neglected community taking care of itself as the system ceases to function. But as soon as the snow is cleared, we can expect the political elite to continue to steal from the workers of the city and subordinate their best interests to the whims of capital, to siphon money and resources from the workers straight into the pockets of real estate developers and investors.

We are facing a future in which a volatile climate will make storms like this one much more common. We have seen again and again how the capitalist social order is unable to cope with the increasingly violent weather. Each crisis of this kind leads to an acute, local intensification of the contradiction between labor and capital, and eventually the strain on the system will become critical.

This gives our commitment to build worker power even more urgency. It is our duty as the class-conscious, revolutionary proletariat to build a movement that is capable of fulfilling our historic task.