This slightly edited article, which appeared in the Jan. 15, 2019, issue of Workers World, is reprinted to recognize the 17-day, 2022 Dakota 38+2 Memorial Ride and to commemorate the 160th anniversary of the largest mass execution in U.S. history. This year’s Memorial Ride left Lower Brule, South Dakota, Dec. 10 for the 330-mile journey to Mankato, Minnesota, for a Dec. 26 commemoration of the 1862 public execution of 38 Dakota warriors (plus two extradited from Canada and hanged the following year, 1863). Josette Peltier, spiritual advisor of the 2022 Memorial Ride, announced this year’s ride will be the last, as the last four senior riders from the original 2005 ride are retiring.

Following the 1862 Dakota Uprising, the captive Dakota people were exiled from their Minnesota homelands to Fort Thompson, South Dakota. Many women and children died of cold and hunger during the winter of 1863, in what Dakota elder and eagle staff carrier Wilfred Keeble has described as the “first concentration camp.” 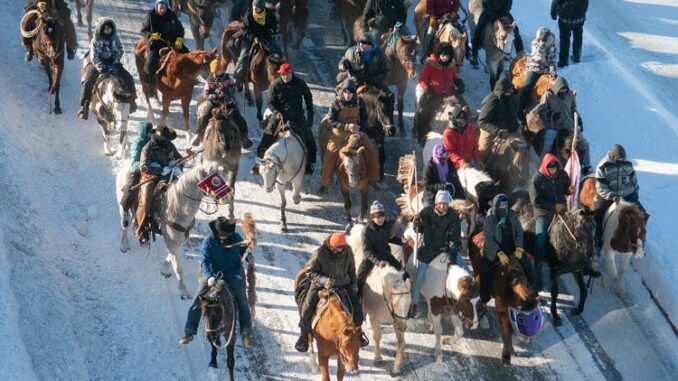 The 2022 Wokiksuye Memorial Riders encountered two snowstorms and long, frigid days. Along the way riders were hosted by community and supporters, taking care of their horses along a 330-mile journey to Mankato, Minnesota, the site of the 1862 execution following the Dakota War. The Wokiksuye Ride reveals the genocidal history of the United States. (Photo: mankatofreepress.com)

Dakota men, women and youth rode into Mankato, Minnesota, on horseback on Dec. 26 to honor Dakota warriors hanged by President Abraham Lincoln on that day in 1862, in the largest mass execution in U.S. history.

The Dakota 38+2 Wokiksuye Sunk Akan Yankapi — the 17-day Dakota Prayer Ride and Water Walk — honors the 38 warriors hanged in Mankato, as well as two additional men who were kidnapped from Canada three years later, brought back to the U.S. and then executed. (Mankato Free Press, Dec. 26, 2018)

This year about 100 riders rode from their homes throughout South Dakota and elsewhere to gather at Sisseton, South Dakota, and began the honoring ride on Dec. 10. The ride follows the 330-mile path of their ancestors to the site of the mass hanging.

During the westward drive of the U.S. to steal all Native nations’ lands and to murder Indigenous peoples, U.S. troops were used in successive war campaigns. By 1860, just before the Civil War, the U.S. Army had six of its seven departments, comprising 183 companies, deployed west of the Mississippi River. This colonizing army was the principal institution of the settler state in the occupation and theft of the West. (Roxanne Dunbar-Ortiz, “An Indigenous Peoples’ History of the United States,” 2014)

Lincoln, like every U.S. president before him, promised settlers land stolen from the Native nations in the West. During Lincoln’s presidential campaign, the “free-soilers,” who were opponents of slavery, demanded the government give them Indigenous land west of the Mississippi River. Following the secession of the Southern states, Lincoln signed the Homestead Act, which resulted in the theft of over 270 million acres of Indigenous lands.

Most of the stolen lands went to wealthy robber barons for riches to be made from timber and mineral extraction — beginning the devastation of the environment for profits. The amount of land given to settlers for homesteads was a small portion of that total. Before and during the Civil War, poor whites who fought for the Confederacy were motivated by a similar desire to own stolen land and slaves — people stolen from their lands in Africa and sold to work the plantations.

From 1778 to 1871, the U.S. negotiated treaties with some 375 Native nations in its drive to militarily take over the West. The treaties itemized provisions of trade goods, cash payments, food and the right to live on some small pieces of their lands. These treaties, referenced in the U.S. Constitution, are the “law of the land.” But from the beginning, the U.S. broke every treaty it signed.

Minnesota, recognized as a state in 1858, created incentives to increase the number of colonizing settlers. In the fall of 1861, the Dakota Nation’s crops failed; then during a bitter winter, they were snowed in and people starved. The treaties were broken, and food was not delivered.

Traders rejected the tribe’s offer to buy food on credit at a meeting with Indian agents and traders. A Dakota person spoke: “This is our reservation, and yet you go out and you cut our grass for your animals. You cut down our trees for your building and your fire. You shoot our game, which we have very little of anyway. It’s ours, you leave it alone.” (Minnesota Public Radio, Sept. 26, 2002)

By summer 1862, a portion of the Dakota Nation rose up against the settler state in an attempt to drive the colonists out of the Minnesota River Valley. Myrick was later found with his mouth stuffed with grass. The Dakota War lasted two months before the Dakota surrendered, and the army marched the prisoners to Ft. Snelling to be executed. After 392 Dakota men were tried in English, with no recognition of sovereignty and treaty violations, they were all sentenced to death. (tinyurl.com/yb8uasbv)

Lincoln ordered that 38 should be randomly selected to be hanged in Mankato. The U.S. Army deployed 1,500 cavalry and soldiers at the hanging; retribution did not end there. The remains of the Dakota men were mutilated and pillaged.

A ride to commemorate the warriors

“When the 38+2 were hung, for them it was over, but the women and children endured terrible suffering,” said one of this year’s riders, Helena LaBatte. “The cavalry did what they wanted with them. They chose who they wanted, what age and what gender.”

The Wokiksuye Commemorative Ride began in 2005, as a result of an earlier dream of Jim Miller, a Dakota elder from Cheyenne River Reservation and a Vietnam veteran. He dreamed that 38 Dakota would ride on horseback each year to honor the warriors hanged at Mankato after the Dakota Uprising.

“This walk is about healing the women, and also for reconciling our men and women,” LaBatte told Native News Online. “Women were the keepers of the water, the dogs and the horses. For us to be whole again, we need all three.”

Paula Looking Horse, one of the Water Walkers, said the planning this year reflected thought of “all the streams and rivers that the walk would cross over and how contaminated many are from dairy farm operations, as well as the 2017 bitumen (coal) spill that happened just west of the Sisseton Wahpeton reservation.” Looking Horse said, “As we walked the path along the Minnesota, we felt our ancestors’ presence all the way. … We prayed for the healing of the water.”

She added, “This year we also raised awareness about the epidemic of missing and murdered Indigenous men, women and children. All of these issues are connected. If you don’t respect the people, you can’t respect the land or the water.”

The Dakota were exiled from Minnesota; repression scattered survivors from Saskatchewan, Canada, to Nebraska. On May 8, 2017, descendants of those exiled Dakota met for the first time at Fort Snelling for the Dakota Truth-Telling Gathering. Kate Beane, a Dakota historian and activist who works for the Minnesota Historical Society, said claims that the fort was built to keep the Dakota and Ojibwe at peace are “not actually the way we view this history.”

“This fort was put here to pave the way for European settlement,” she said. “It is a symbol of colonization, of imperialism, of years of unjust negotiations and dealings with our community. Two of our warriors were hanged right over here, outside of the round tower. … So sometimes if you hear 38 plus two, those were the two.” (MPR News, May 8, 2017)

The Wokiksuye Ride reveals the genocidal history of the United States. From the beginning, the settler state was founded to steal all lands and resources from the original peoples of this continent.

Manifest Destiny, the philosophy of the founders of the U.S., remains the principle of the ruling class: to steal everything for profits, whether by war or so-called peaceful means. To this day these lands are still being plundered and desecrated for profits — to the increasing threat to life on Earth.