The slightly edited statement was released on Dec. 15, 2022. 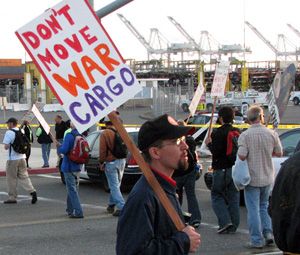 We, members and retirees of the International Longshore and Warehouse Union (ILWU), are very concerned about the Coast Committee’s public statement of March 3, 2022, on the war in Ukraine. It diverges from the many antiwar positions that our union has taken, even when it was unpopular to do so.

On May Day 2008, ILWU shut down all West Coast ports to oppose the “imperialist wars in Iraq and Afghanistan” (as the Caucus resolution read). We have taken action at the point of production against U.S. wars and the apartheid government in South Africa. We refused to load military cargo to the anti-communist military juntas in Chile and El Salvador. We are proud of that legacy. The International Dockworkers Council (European Section) issued a declaration in February calling for an end to the Ukraine war. So must the ILWU.

We are faced with a class war at home and a war abroad between two capitalist governments. Unions are organizing to fight billionaire capitalists, like Amazon owner Jeff Bezos and Oakland A’s owner John Fisher, who is scheming to build a ballpark in the busy Port of Oakland.

While ILWU is confronting the Pacific Maritime Association (PMA) over automation and inflation in contract negotiations, people in Jackson, Mississippi, and Flint, Michigan, can’t get clean drinking water. Worse still, Black and Brown communities face deadly terror from police and ICE daily. In 2003, police attacked antiwar demonstrators in the Port of Oakland chanting: “Wars are for profit, workers can stop it!”

In 1967, during the Vietnam War, Martin Luther King Jr. called the U.S. “the greatest purveyor of violence in the world.” After that speech ILWU Local 10 invited him to speak at the union meeting, where he was awarded “Honorary Member” status in our union. A year after his antiwar speech, he was assassinated.

The U.S. has been in a state of perpetual warfare since WWII. The Ukraine war, provoked by U.S./NATO aggression, is a dangerous preliminary war jeopardizing a massive nuclear contamination at Zaphorizhzhia, the largest nuclear plant in Europe, and can lead to nuclear war against Russia and to WWIII with China.

After the fall of the Soviet Union, Secretary of State James Baker promised not to threaten Russia’s security by moving NATO toward Russia’s border by adding countries of the former Eastern Bloc. That agreement has been broken time and again by the U.S., despite warnings by Russia.

We believe there needs to be a position taken on the Ukraine war consistent with ILWU’s history. Dockworkers internationally can stop this bloody war. The reactionary, nationalist governments of Russia and Ukraine won’t.

In 2014, a U.S.-driven Maidan coup in Ukraine overthrew the elected government and burned down the trade union headquarters building in Odessa, killing 48 people. In opposition to the coup, two Russian-speaking provinces of Eastern Ukraine, Donetsk and Luhansk, seceded. The democratic right to self-determination from the nationalist Kiev government, which banned the Russian language, must be recognized for the Eastern and Southern provinces.

The neofascist Azov Brigade opened fire on the two newly founded republics of the Donbass region, killing over 15,000 civilians. African immigrants in Ukraine attempting to flee the war were subjected to racial discrimination by the Zelensky government.

The ILWU must call for an end to the war. Most importantly we must appeal for port actions to the International Dockworkers Council (IDC) and the International Transport Workers Federation (ITF) to refuse to handle military cargo by dockworkers around the world. They both opposed the Zionist massacre of Palestinians last year. They can call for an end to the Ukraine war now. International workers’ actions refusing to handle military cargo can stop it.