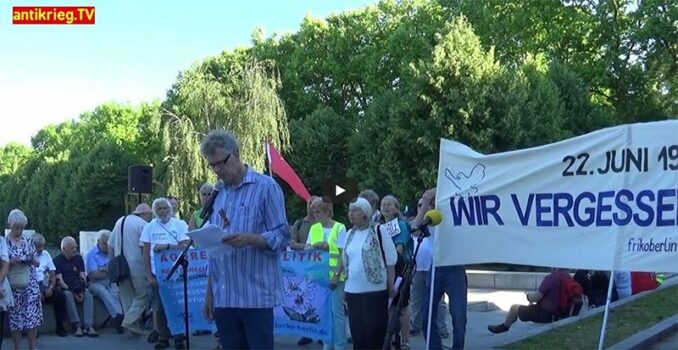 Bücker’s speech focused on the horrors the Nazi Wehrmacht inflicted on Ukraine during German imperialism’s World War II occupation of the Ukrainian Soviet Socialist Republic. It described the close relation between the Ukrainian ultranationalist organizations of that period — which collaborated with the Nazis in carrying out the horrors — and pro-fascist organizations that are part the current Ukraine regime in Kiev.

The German army’s crimes of the 1941-44 occupation included “the whole or partial destruction of 15 cities, 1,710 towns and 70,000 villages, nearly 60 million buildings,” according to Bücker, plus the murder of millions of Jews and other minorities, communists and the many Ukrainians who resisted the Nazis.

Bücker’s speech thus reported information that many historians consider factual. Since pro-fascist groups — Bandera, the Azov battalion — are part of the Kiev regime, his facts dispute the imperialist propaganda that describes the current Ukrainian regime as “democratic.”

Bücker writes of a “narrowing of political space” in Germany to express opinions opposing German participation in the proxy war in Ukraine against Russia. The charges brought against him for his speech, for which he can face up to three years in prison and a fine, is proof of it. This increase in repression of antiwar forces, he writes, also exists in other European Union countries.

The U.S.-led war and sanctions against Russia, which the coalition government in Berlin has backed in full, has forced sacrifices on Germany’s working class. Many won’t afford to heat their homes this winter and put food on the table. Meanwhile, big capital in Germany has accelerated investments abroad, including building factories in U.S. states with union-busting conditions.

The reaction, especially in Eastern Germany, has been mass protests calling for an end to the blockade of Russian oil and gas, the cause of high fuel prices. This mass sentiment provides an opportunity for anti-imperialists in Germany to mobilize, by opposing German military aid to the Kiev regime, demanding an end to the sanctions against Russia and opposing plans to double Germany’s military budget. The German Peace Council took such a position at their Dec. 10 annual meeting in Kassel.

Many antiwar activists in Germany are disappointed that, except for some resolute anti-imperialists, the leadership of The Left Party (Die Linke) has abandoned their usual opposition to German militarism in Bundestag (Parliament) voting. This retreat has left an opening for far-right parties — which oppose the current government but are pro-militarist at heart — to play a major role in mobilizing the discontent.

Antiwar organizations in the United States should make clear their solidarity with Bücker and with all in Germany who oppose NATO and German, European Union and U.S. imperialism’s proxy war against Russia.