Boston — Over 3,000 new members of the Boston University Graduate Workers Union (BUGWU), Service Employees (SEIU) Local 509, celebrated a 98.1% NLRB election victory Dec. 7, which was months in the organizing. To punctuate that 2022 has been a wildly successful year of rank-and-file union organizing in the U.S., some labor researchers have characterized the 1,414 to 28 vote as “the most lopsided NLRB election win **ever** by a bargaining unit [of] more than 1,000 people.” (@dskamper, @gradworkersofBU, Twitter) 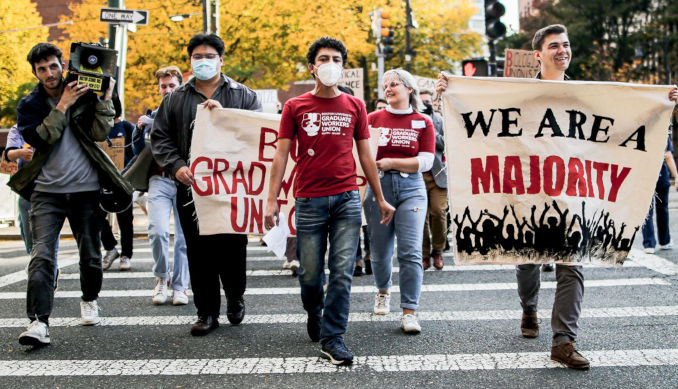 Speaking at a Dec. 9 Boston rally marking the one-year anniversary of the first victory for Starbucks Workers United, rank-and-file BUGWU organizer Wu Nairan credited “the inspiration and solidarity of [this summer’s 64-day] strike of Boston Starbucks Workers United on the BU campus” with propelling BUGWU’s win. “I was there when Starbucks management brought in the Pinkertons and Boston police,” recalled Nairan to rousing cheers. “And guess what happened. The next day they were defeated by the solidarity of the workers!”

BUGWU organizers applied these militant lessons on the same streets and in the boardroom suites on Oct. 18, when they marched on BU’s administration building to demand voluntary recognition from BU’s University Council while it was meeting upstairs. When the union delegation was refused a hearing, squads of organizers evaded dozens of hastily scrambled-together BU and Boston cops, making their way in elevators and stairways to present their demand to BU’s usually secretive, unknown corporate vice presidents, finance and operations officers.

In an interview with Workers World, Nairan explained that these Council members of one of Boston’s largest “nonprofits” — which pay zero taxes in Massachusetts — divvy up billions of dollars in grant monies from mostly military, high tech, biotech, Big Pharma and Wall Street-sponsored companies and foundations to various university departments. The lion’s share goes to STEM. “With these enormous funds,” Wu said, “BU’s sprawling campus and neighborhood housing for over 34,000 students is like a giant real estate company that sells modern education and research.”

It’s the thousands of graduate students, master’s and Ph.D. levels, who provide the labor to produce research advances and educate undergraduates, the next generation of workers, for pillars of capitalist industry like Boston’s Raytheon, GE, Fidelity, Akamai, iRobot and Moderna.

While the shrinking ranks of tenured professors present most lectures and get sometimes larger salaries, sometimes headlines from the university, graduate workers perform more than 90% of the educational labor for the corporation. In addition to leading all daily discussion groups and labs, handling tens of thousands of student communications, providing office staffing and scoring all quizzes, tests and theses, graduate workers simultaneously work full-time as students, while doing the research that drives the grants for every department. 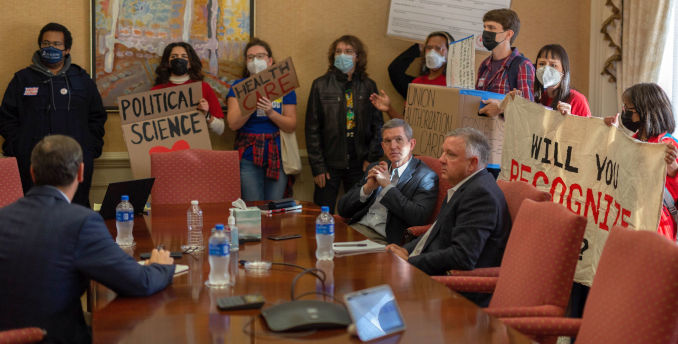 Master’s candidates go into debt to pay BU’s $50-65,000 yearly tuition and fees. Their hourly wage is based on minimum required hours; if actual hours spent working are added up, they are often paid less than Massachusetts’ minimum wage. Ph.D.-level workers receive a department-dependent “stipend,” with the “arts” at the lowest pay rate of $24,000 per year.

When it comes to room and board, these frontline graduate workers are essentially on their own, with Boston’s studio apartments averaging $2,885 per month, more than 100% of what most graduate workers earn in pay. BU and other big landlords in the near-zero vacancy rate neighborhood have almost total control of rental costs. Most graduate workers can’t afford the university’s meal plan.

Nairan pointed to BU administration’s dangerous requirement for graduate workers to teach in-person at the beginning of the COVID-19 pandemic as a major catalyst for BUGWU’s organizing drive. While nearly 100% of undergraduate students opted for remote learning before introduction of vaccines in 2021, BU bosses forced graduate workers to show up to often empty, windowless classrooms and labs, many without ventilation.

And in 2022, like nearly every other employer in the U.S., BU administration has discarded every pandemic mitigation protocol that its own scientists and public health specialists advocated, like masking and testing. This has made life for graduate workers in Boston even more precarious.

Wu explained that the united rank-and-file upsurge — from the linguistics, philosophy and music departments to biology, physics, engineering and economics — is raising demands for a living wage of at least $50,000, higher for the many graduate workers with children; full health care benefits for all workers and their families; full accessibility for all BU workers and students with disabilities; paid sick days and COVID-19 health protocols; and a strong grievance process to defend the rights of the rank and file.

BUGWU’s position is that BU’s diverse workforce should be contractually empowered to participate in deciding every aspect of student-worker life.

Nairan emphasized that last week’s historic vote was the result of months of building solidarity through the Black Students Caucus; the Caucus for Disabled, Chronically Ill and Neurodivergent Grad Workers; the Women and Sexual Minorities Caucus; the Queer Students Caucus; the Latinx and Asian American Grad Workers Caucus; the International Students Working Group; and the Parent and Caregiver Caucus. The new union’s caucuses are publicized on its website. (BUgradworkers.org)

“Caucuses are the vehicle for bargaining out what is fair treatment for every group of workers on BU’s huge campus,” concluded Nairan. “The union is about giving a voice to and promoting the identities, human needs and demands of all the workers who have been denied a voice for too long by the BU administration.

“During the three weeks before the election, over 100 people, including community members and supporters from other unions, collectively made over 10,000 calls to counter BU’s attempts to suppress the vote. We have shown that we will no longer accept BU’s attitude of treating us solely by how much labor and profit they can extract from us. At BUGWU we mean what we say, ‘No decisions about us without us!’”

Steve Gillis is a 37-year member and an elected leader of the Boston School Bus Drivers Union, United Steelworkers Local 8751, now working for the members and retired from driving.