Dec. 16 — Supporters and family of Pennsylvania political prisoner Mumia Abu-Jamal filled the courtroom and demonstrated outside the Philadelphia Criminal Justice Center today. All were asking whether Philadelphia Court of Common Pleas Judge Lucretia Clemons would continue the long miscarriage of justice against Mumia — 41 years in prison — or whether she would place herself on the side of justice and rule in favor of Abu-Jamal. 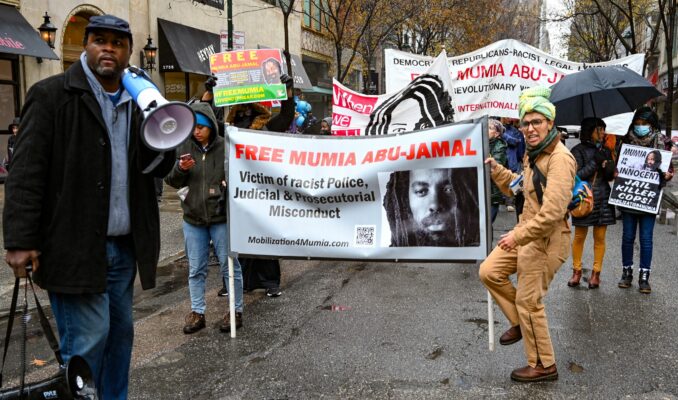 In the end, it is accurate to say Clemons straddled the judicial fence — but in a way beneficial to Mumia.

After hearing additional oral arguments from attorneys Judith Ritter and Sam Spital for Abu-Jamal and counter arguments from Assistant District Attorney Grady Gervino for the commonwealth, Clemons announced she would not make a ruling today. But in a surprise move, Clemons asked how much access Abu-Jamal’s attorneys had been given to the case files, beyond the six boxes made accessible in January 2019.

Ritter explained that, when the case was before Common Pleas Court Judge Leon Tucker, only the staff for the judge reviewed the files, looking for evidence related to former Philadelphia District Attorney, and subsequently Pennsylvania Supreme Court Justice, Ronald Castille, and the issue of his judicial bias against Abu-Jamal.

In piecemeal fashion, the commonwealth provided 31 evidence boxes to Tucker during the entirety of the hearings, from April 24, 2017, through December 2018. Toward the end of that initial appeal, District Attorney Larry Krasner’s office admitted there were more than 200 boxes of files that could be relevant to the case.

Following Tucker’s December 2018 ruling, Krasner admitted finding six additional evidence boxes, which were numbered as if belonging to a separate group of 29 boxes. Abu-Jamal’s attorneys were given access to the six boxes, but they raised questions about whether there were 23 more that were not made available to review.

Acknowledging that she was aware of the 200 boxes mentioned by Krasner, Clemons stated that, in the interest of uncovering any additional evidence to support claims of violation of Abu-Jamal’s rights, his attorneys should be granted access to all file boxes. The relevant legal cases are Batson (involving racism in jury selection) and Brady (concerning withholding exculpatory evidence from the defense).

After the commonwealth prosecutors agreed to make this happen, Clemons announced a 60- to 90-day extension and adjourned the proceedings. Contrary to its own interests, by acknowledging the existence of evidence previously withheld from Abu-Jamal and his attorneys, the commonwealth admitted a Brady violation.

In a 31-page notice of intent to dismiss the petition on Oct. 26, Clemons questioned why Abu-Jamal and his attorneys had not previously raised the evidence that District Attorney Joseph McGill had tracked the race of potential jurists — a Batson violation. (tinyurl.com/mtvcrfs4)

At the hearing today, Spital reiterated the points made in Abu-Jamal’s July 1995 Post-Conviction Relief Application (PCRA) hearing, regarding jury selection by race. These were dismissed by trial judge Albert Sabo, who was also the judge in Abu-Jamal’s initial 1982 hearing. (tinyurl.com/mvfstd3w)

Sabo’s history of convictions and sentences in capital cases evidenced deep racial disparities, including a high number of defendants sentenced to death — 31 people given death sentences over a period of 14 years, 29 of whom were racial minorities. In 2001, court stenographer Terri Maurer-Carter declared under oath that she had heard Sabo state to another judge, ‘I’m going to help them fry the n****r,’ referring to jurists in Abu-Jamal’s 1982 trial. (tinyurl.com/mr2rwnbp)

No time-bar for racism

On Dec. 6, the United Nations Working Group of Experts on People of African Descent filed an amicus brief — a friend of the court document — that reinforced the facts and arguments in Mumia’s 1995 PCRA filing. They argued that no judicial time-bar should be applied when the defendant is a victim of historic racial bias that may have tainted the possibility of a fair trial and due process. (tinyurl.com/587r633p)

At a Dec. 13 press conference announcing the brief, the Hon. Wendell Griffen, Division 5 judge of the 6th Judicial Circuit Court for Pulaski County, Arkansas, said: “Clemons is only the second Black judge to hear any aspect of Abu-Jamal’s case. Will she have the courage to say that there are too many factors here that compel for Mumia to justify dismissing the motion? This evidentiary hearing is required, because exculpatory evidence was concealed.” (youtu.be/Xh38IKVc_oc)

Griffen clarified his statement during a Dec. 14 Democracy Now interview: “Under a 1963 decision that every law student knows about and every lawyer knows about who does criminal law practice, Brady v. Maryland, the Supreme Court of the United States held that due process of law is violated when the prosecution conceals evidence relevant to guilt or punishment from defense. In this country, that kind of precedent should have required Mumia to be released, and the state, or the commonwealth, in this case, decide whether or not to prosecute him based upon having revealed the right evidence. That hasn’t been done.” (tinyurl.com/y86bd3ks)

Following the hearing, Abu-Jamal’s supporters concluded a spirited rally with a militant march through Center City. From the courthouse, demonstrators circled City Hall, marched in 15th Street to Chestnut Street, then turned against traffic to 21st and Chestnut, where they gathered for a strategy meeting at the Unitarian Church.

Since the Oct. 26 hearing when Clemons announced her intent to dismiss, Abu-Jamal’s supporters have taken the struggle into overdrive. Multiple global demonstrations for Mumia and a zoom rally for political prisoners took place on and around Dec. 9, the anniversary of his incarceration. Hundreds of letters, including statements from labor unions, were sent to Clemons. The day after the U.N. press conference Dec. 13, a one-of-a-kind mural, picturing a younger Mumia Abu-Jamal holding a child, was displayed on a wall outside One Art in West Philadelphia.

The energy from the past weeks fueled today’s events. Abu-Jamal’s supporters are determined to continue to fight until Mumia is free.