If there is a clear victor at the World Cup soccer games in Qatar, it is the Palestinian people. Even though they are not competing, solidarity with their struggle has been front and center in the stadiums, markets and streets of Doha, the country’s capital, the site of the first such competition ever held in the Middle East. 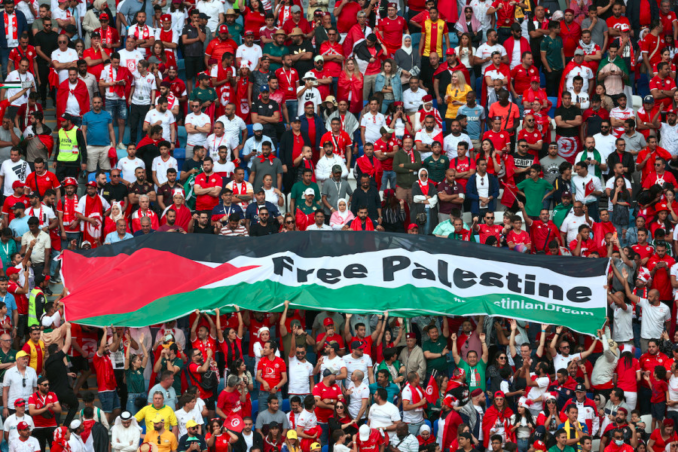 Fans hold huge ‘Free Palestine!’ flag during the game between Tunisia and Australia on Nov. 26.

The games have not been free of controversy. The mistreatment, even deaths, of migrant workers since Qatar was named host of the games in 2010, has been criticized. FIFA, the World Cup’s owner, banned players from wearing “One Love” rainbow armbands symbolizing inclusivity because they promoted LGBTQ rights, violating Qatar’s strict laws. However, state officials have allowed armbands and other symbols of solidarity with Palestine.

“Free Palestine” flags fly everywhere. Thousands of fans wear pro-Palestine armbands. Chants and songs supporting the struggle against U.S.-backed Israeli repression reverberate throughout Qatar and beyond to other Arab countries and further, as anti-Zionist allies worldwide show their solidarity.

During a game between Tunisia and Australia Nov. 26, the crowd displayed an

Significantly, Morocco’s national team highlighted the Palestinian cause by raising Palestine’s flag after its many victories. Fans celebrated, especially when Morocco eliminated Spain in a penalty shootout Dec. 6. And then on Dec. 10, Morocco beat Portugal 1-0.

Morocco is the first Arab team to make it to the quarterfinals of the World Cup, and the first African team to make the semifinals. Their wins are seen as a victory for Africa and the Arab world, and especially for the Palestinians.

Following the teams’ victories, celebrations occurred nightly in Doha of Arab peoples cheering for Palestine. Thousands joyfully danced and honked car horns in Ramallah and throughout the Occupied West Bank and Gaza; festivities occurred throughout the Arab world. After the team beat Spain, ecstatic fans filled the streets of Rabat and Casablanca in Morocco and in London, Paris and Madrid.

Despite diplomatic ties between some Arab governments and Israel, the masses in the Arab world defiantly support the Palestinians. This love and solidarity is heartwarming to the Palestinian people.