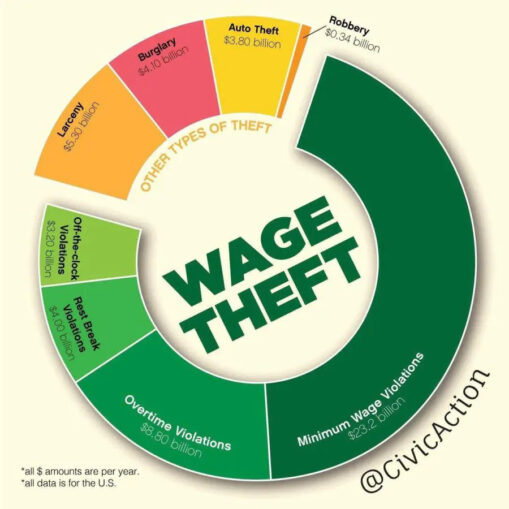 As this graph illustrates, the capitalists are by far the biggest stealers of workers’ earnings.

Wage theft is a serious and growing problem for the working class. As Policy Matters Ohio explained in a 2019 report: “When employers refuse to pay promised wages, pay less than the minimum wage, fail to pay for all hours worked or don’t pay overtime compensation as required by law, it is theft. They’ve stolen that worker’s time and their wages.” (tinyurl.com/3hpnhvnj)

The Cleveland campaign to hold bosses accountable for wage theft, led by Guardians for Fair Work, scored a win Dec. 5 when City Council passed a wage theft ordinance. The city will not do business with companies or their subcontractors who engage in wage theft. Those found guilty of wage theft will be put on an Adverse Determination List and barred from city contracts for three years. A seven-member Fair Employment Board will oversee enforcement of the ordinance.

Guardians for Fair Work, a year-old coalition of unions and other workers’ rights advocates, organized supporters to pack Council chambers when the vote was taken on the ordinance. The group’s name reflects that the city and Cuyahoga County have put up hundreds of millions of dollars to renovate and maintain the Cleveland Guardians baseball field.

Guardians for Fair Work posed the question: “If the public is being asked to fund a private business operation on the basis of job creation, shouldn’t lawmakers also ensure quality jobs across Cleveland that pay workers fairly and treat workers with dignity?” (guardiansforfairwork.com)

The Policy Matters report found that each year, hundreds of Cleveland companies violate the federal Fair Labor Standards Act — itself a weak bill first passed in 1938, which requires a pittance of a minimum wage, time and one half overtime pay after 40 hours and limits child labor.

Those most impacted by wage theft, many of them undocumented, are already low-wage workers before they are illegally cheated out of part of their pay — to the tune of $2,800 per worker each year on average.