As a Houstonian, I’m relieved and happy you are finally home. Your spouse, Cherelle Griner, and the Women’s National Basketball Association initiated a mass movement to bring you home. 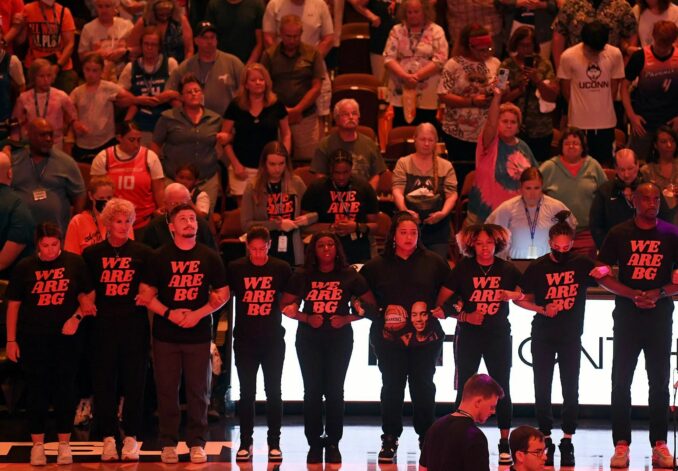 I have admired you for years, as you played basketball right here in Houston at Nimitz High School and then at Baylor College. And now in the WNBA, you have again excelled.

WNBA Commissioner Cathy Engelbert said it best, “There has not been a day over the past 10 months, where we all haven’t had Brittney Griner on our minds and in our hearts, and that has now turned into a collective wave of joy and relief knowing that she will soon be reunited with her family, the WNBA player community and her friends.” (wnba.com, Dec. 8)

In 2020 when you announced you’d stay in the locker room when the national anthem was played before games, you took a heroic stance against police violence. In a protest for justice for Breonna Taylor, a Black woman murdered by police in Louisville, Kentucky, in March of 2020, your position against killer cops raised an urgent issue way too common in communities of color.

The WNBA has tremendous power and a voice that is already loud and clear for social justice. For instance, the Atlanta Dream helped to oust their former racist, right-wing owner, Senator Kelly Loeffler in 2021.

Each of your 12 teams already work with and financially support an organization in their town committed to helping people who don’t have a voice.

Your team, the Phoenix Mercury, works with the Black Mothers Forum in Phoenix. One of their goals is to break the cycle of the school-to-prison pipeline.

The New York Liberty works with A Little Piece of Light, whose focus is to empower and facilitate healing for women, girls and gender-nonconforming individuals directly impacted by the criminal justice system.

Right here in Texas, the Dallas Wings work with a community foundation, which confronts homelessness and mental health care, both issues which often lead to incarceration.

What if you all gathered your collective power and used your voices to aid the women in prison here, women who are primarily Black, Brown and Indigenous? You have proven yourselves to be strong, motivated and socially conscious.

Here are the facts

In the U.S., women are the fastest growing group of people locked up in state and federal prisons, county jails and juvenile detention centers. Between 2018 and 2019, a total of 1.2 million women were under criminal justice supervision, according to The Sentencing Project.

The news media speaks about the dreadful conditions you experienced in the Russian prison, but were those conditions unlike prison conditions here? Most people in prison here have horrible and unhealthy diets; health care is abysmal, and living conditions are disgusting. An overwhelming percentage of prisoners take plea deals instead of going to trial, sometimes out of fear and intimidation, sometimes pleading guilty to a crime they didn’t even commit.

What if each team could focus on their state and the issues women locked up there face? Are they shackled during pregnancy and childbirth? Do male guards strip-search and sexually abuse them? Are they even given supplies for their menstrual cycle? Do they go without necessities like soap, toothpaste and shampoo if they have no funds in their commissary account? Are women dying or becoming ill in jails, because they don’t have money for bail?

Think of the real changes that you all could make right here. You have influence and not just on the basketball courts.

Brittney, you were so right, saying in a 2020 interview: “Basketball doesn’t mean anything in a world where we can’t just live. We can’t wake up and do whatever we want to do. Go for a run, go to the store to buy some candy, drive your car without the fear of being wrongfully pulled over.” (tinyurl.com/24358tch)

You and the rest of the WNBA can help make this world a better place by supporting rights for incarcerated people, especially women of color.

For all the Sandra Blands of the country, I hope you all will do it.