The following edited remarks were made by Kimimilasha James, co-leader of United American Indians of New England, at the 53rd annual National Day of Mourning rally, Nov. 24, 2022. Go to tinyurl.com/3z9cbkzc to live stream the entire rally on youtube. 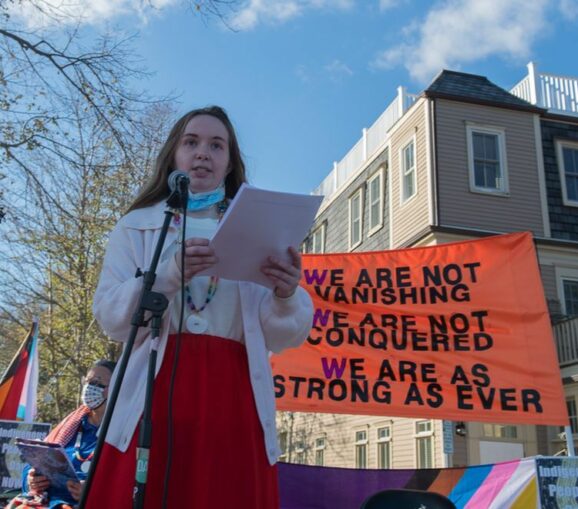 Once again on so-called “Thanksgiving Day,” United American Indians of New England and our supporters are gathered on this hill to observe a National Day of Mourning for the Indigenous people murdered by settler colonialism and imperialism worldwide. Today marks the 53rd time we have gathered here to mourn our ancestors, tear down settler mythologies and speak truth to power.  . . .

Fifty-two Thanksgivings ago, my grandfather, an Aquinnah Wampanoag man named Wamsutta Frank James, was invited by the Commonwealth of Massachusetts to speak at a banquet celebrating the 350th anniversary of the arrival of the Pilgrims. The organizers of the banquet no doubt imagined that Wamsutta would sing the praises of the American settler-colonial project and thank the Pilgrims for bringing “civilization” to these shores.

However, the speech that Wamsutta wrote, which was based on historical fact rather than the sham version of history perpetuated in the Thanksgiving myth, was a far cry from complimentary.

In his speech, Wamsutta not only named atrocities committed by the Pilgrims but also reflected upon the fate of the Wampanoag at the hands of the settler invaders. The speech contained a powerful message of Native American pride. “Our spirit refuses to die,” wrote Wamsutta. “Yesterday we walked the woodland paths and sandy trails. Today we must walk the macadam highways and roads. We are uniting. . . . We stand tall and proud; and before too many moons pass, we’ll right the wrongs we have allowed to happen to us.”

When state officials saw an advance copy of Wamsutta’s speech, they refused to allow him to deliver it, saying that the speech was too “inflammatory.” They told him he could speak only if he were willing to offer false praise of the Pilgrims. The organizers even offered to write a speech for him, one which would better fit with their settler-colonialist narrative.

But Wamsutta refused to have words put into his mouth. His suppressed speech was printed in newspapers across the country, and he and other local Native activists began to plan a protest. The flyer for this protest, which was circulated nationwide, read: “What do we have to be thankful for? The United American Indians of New England have declared Thanksgiving Day to be a National Day of Mourning for Native Americans.”

On so-called Thanksgiving Day 1970, Wamsutta and members of at least 25 tribes, as well as a sprinkling of non-Native allies — 200 people — gathered here on this hill and observed the first National Day of Mourning. . . . They spoke out about the Pilgrim invasion and conditions in Indian Country, marched around Plymouth, boarded the Mayflower II and even buried Plymouth Rock!

Over the years we repeatedly disrupted the Pilgrim Progress parade, a tradition we continued until 1996. The following year in 1997, we were blocked on Leyden Street, brutalized by police and arrested without warning for simply trying to march peacefully. The resulting court case and settlement led to the National Day of Mourning plaque you see here on Cole’s Hill and the Metacomet plaque we will visit when we march.

Consistently, our organization has never collaborated with the Pilgrims or their institutions, whether the Mayflower Society, the Plymouth 400 international colonizer celebrations or the Macy’s Thanksgiving Day Parade.

So, why do so many Native people object to the Thanksgiving myth? According to this myth, the Pilgrims, seeking religious freedom, landed on Plymouth Rock. The Indians welcomed them with open arms and then conveniently faded into the background, and everyone lived happily ever after. The end.

Here is the truth

First, the Pilgrims are glorified and mythologized because the circumstances of the first permanent English colony in North America — Jamestown — were too ugly to hold up as an effective national myth. Pilgrims and Indians are a much more marketable story than settler cannibalism.

Second, the Pilgrims came here as part of a commercial venture. They didn’t need religious freedom — they already had that back in the Netherlands. The Mayflower Compact was merely a group of white men who wanted to ensure they would get a return on their investment.

Third, when the Pilgrims arrived — on Outer Cape Cod by the way, not on that pebble down the hill — one of the first things they did was to rob Wampanoag graves at Corn Hill and steal as much of their winter provisions of corn and beans as they were able to carry.

Fourth, some Wampanoag ancestors did welcome the Pilgrims and save them from starvation. And what did we, the Indigenous people of this continent, get in return for this kindness? Genocide, the theft of our lands, the destruction of our traditional ways of life, slavery, starvation and never-ending oppression.

Fifth, the first official Thanksgiving did not take place in 1621, when the Pilgrims had a harvest-time meal provided largely by the Wampanoag. Instead, the first Thanksgiving was declared in 1637 by Governor Winthrop of the Massachusetts Bay Colony to celebrate the massacre of over 700 Pequot men, women and children on the banks of the Mystic River in Connecticut. . . .

Subsequent slaughters of Indigenous people would be celebrated by a day of Thanksgiving; and yet we are labeled as “savages” in the history books.

When people perpetuate the myth of Thanksgiving, they are not only erasing our genocide but also celebrating it.

We are as strong as ever

We did not simply fade into the background, as the Thanksgiving myth says. We have survived and flourished; we have persevered. The very fact that you are here is proof that we did not vanish. Our very presence frees this land from the lies of the history books and the mythmakers.

Many of the conditions that prevailed in Indian Country in 1970 still prevail today. In 1970, our average life expectancy was just 44 years. Today, we continue to have the lowest life expectancy of any group in the U.S., and the death rate for Native women has increased 20% over the past 15 years. In 1970, our suicide and infant mortality rates were the highest in the country. This has not changed.

We all know that racism is alive and well. All of us are struggling under the oppression of a capitalist system, which forces people to make a bitter choice between heating and eating.

And we will continue to gather on this hill, until we are free from this oppressive system — until corporations and the U.S. military stop polluting the earth — until we dismantle the brutal apparatus of mass incarceration.

We will not stop until the oppression of our LGBTQ+ siblings is a thing of the past, until unhoused people have homes, until human beings are no longer locked in cages at the U.S. border, despite the fact that no one is illegal on stolen land. Until Palestine is free, until no person goes hungry or is left to die because they have little or no access to quality health care, until insulin is free, until union busting is a thing of the past — until then, the struggle will continue!

In 1970 we demanded an end to the Bureau of Indian Affairs. That is still a demand today; Native nations do not need federal oversight to govern ourselves or take control of our own lands. . . .

Let us not forget that this country was founded on the ideology of white supremacy, the widespread practice of African slavery and a policy of genocide and land theft. Let us not forget that under the pipelines, skyscrapers, mines and the oil rigs lie the interred bones, sacred objects and villages of our Native ancestors. . . .

In 1970, very few people would have given any thought to the fact that the Indigenous people of this hemisphere do not look upon the arrival of the European invaders as a reason to give thanks. Today many thousands stand with us in spirit, as we commemorate the 2022 National Day of Mourning.

We are not vanishing. We are not conquered. We are as strong as ever.