​​President Joe Biden has just signed legislation, passed by both houses of Congress, imposing a contract between Class One freight rail companies and the 11 railroad unions. Thus with the stroke of a pen, the CEO of the capitalist state, Biden, stripped these unions of their most basic right: the right to strike.

A separate bill adding seven paid sick days to the railroad workers’ contract — a key bargaining issue for the workers — passed in the House but was defeated in the Senate.

This anti-worker legislation should shatter any illusions that the Democratic Party is the party of the working class. Biden’s signing the deal gives the lie to his phony statement, made for the umpteenth time on Labor Day 2021, that he intends “to be the most pro-union president leading the most pro-union administration in American history.” (whitehouse.gov) 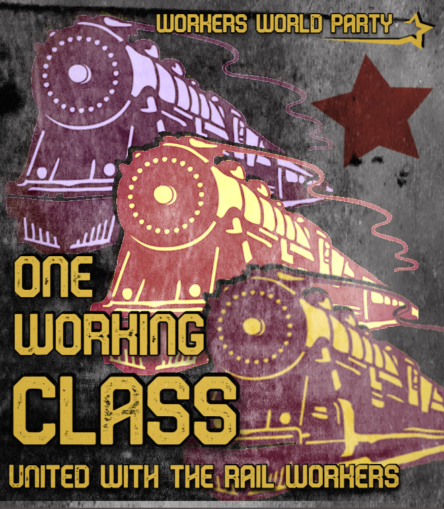 Rail unions have been trying to negotiate a just contract with the carriers for three years. Their last strike was in 1992; Congress forced them back to work then too. Since that time, the rail workforce has been systematically cut from 500,000 to 130,000, with train teams of only two people, which move more freight with about a quarter the workforce.

Now the companies want to reduce the two-worker team to one — one engineer operating “megamonster trains.”

Four unions representing a majority of all railroad workers have voted to reject the tentative agreement brokered by Biden and Labor Secretary Marty Walsh in September.

The workers’ main issues involve scheduling their work time and to take paid and unpaid time off for health situations and family events.

Freight rail companies’ profits have skyrocketed. “Congress should not have to intervene. The railroads should provide paid sick leave to its employees,” Maintenance of Way Employees union (BMWED-IBT) said in a statement. “They have the money to do it, and it literally would cost them a penny of every dollar of record profits to provide it. It’s only 2% of what [the rail companies] CSX, NS and UP spent so far this year in stock buybacks. It’s literally nothing to them, yet they refuse to provide it.” (cnn.com, Nov. 14)

If they were to strike now, rail unions would be in violation of the law and would confront the capitalist state apparatus as well as the freight companies. Unlike the bulk of U.S. private sector workers, rail workers are not covered by the 1935 National Labor Relations Act.

The 1926 Railway Labor Act, passed before the National Labor Relations Act and before the mass labor upsurge of the 1930s, has language intended to limit the ability to strike. Specifically, it allows Congress to pass legislation imposing a contract on railroad workers — which it has done 18 times since the law’s passage — even after the workers vote to reject that contract.

Biden says his action “helps our nation avoid what, without a doubt, would have been an economic catastrophe” for millions of workers, many of them union members. But what really hurts unions is this bipartisan attack on the one real weapon labor has against capital: the power to withhold our labor.

Workers World Party is in unshakable solidarity with the rank-and-file railroad workers in whatever action they take next. We say no to state-sponsored strikebreaking. Repeal the Railway Labor Act! Pass the Protecting the Right to Organize Act! All power to the workers!