Part-time faculty at the New School in New York City are on the picket line, since the school administration failed to meet their demands for a pay increase, better health care options, a voice in curriculum planning and job security. These faculty are members of United Auto Workers Local 7902, and they voted overwhelmingly to strike when their current contract expired mid-November. The part-time faculty have not had a raise since 2018.

The 1,500 union members make up 87% of those who teach at the New School. In a statement, the union noted: “The New School’s reputation rests on its progressive history and professed values — a reputation with which its treatment of workers fails to align.” (tinyurl.com/2p9vxtss)

Workers at the Nordson Corporation in Amherst, Ohio, have been on strike since early November. The 130+ workers are members of International Association of Machinists Local 1802. Like so many others in the U.S., workers at Nordson kept the company afloat during the pandemic despite personal risk to themselves and their families. Now they are demanding a wage increase commensurate with the cost of living under rising inflation, as well as health care options that won’t break the backs of workers struggling with exorbitant medical expenses.

Contract talks broke down when the corporate bosses would not budge on the issue of mandatory overtime. The company demands 32 weekend days per year from every worker. At one day per weekend, that rips up 60% of all weekends for workers.  IAM spokesperson T. Dean Wright Jr. states, “We’re simply asking for a respectable contract that has a basic level of work-life balance for our members. We are a critical part of this community and its economy. . . .” (tinyurl.com/mpb9xntx) 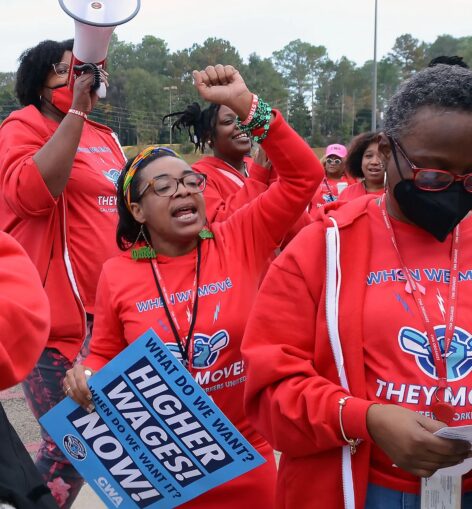 The workers at Maximus Call Centers in four states in the South are organizing with the Communications Workers and have been on strike since Nov 1. The CWA estimates 650 Maximus workers are on strike in the Louisiana, Mississippi, Kentucky and Virginia call centers.

Workers said they will not return until their wages are increased to $25 an hour. The company has offered a puny $200 incentive to workers in an attempt to break the strike. Maximus is the largest federal call center contractor handling Affordable Care Act enrollments.

Tiffany Murray, a worker at the Mississippi Call Center, spoke truth to power, “We don’t want to patch; we want a new foundation. Fix a flat, we don’t need that. We need a whole new tire moving forward. So going out is going to show them that you can’t just pacify us with a bonus. We need our rights.”

The workers demand protection from sexual and racial harrassment from callers, since their complaints on these issues have been virtually ignored by senior management. And the call center workers want 30 minutes of break time in each 8-hour shift for their mental health, given the stressful nature of the work.

At a press conference with Maximus workers, Charles Taylor, executive director of the Mississippi NAACP, aligned the Maximus workers with the strong history of Black women activists in the South: “It is not by accident that Black women from Mississippi and Louisiana are the ones to call out this injustice of our system that expects them to be essential workers but does not treat them as human beings who matter.” (tinyurl.com/yc5v9p84)