Workers from Ostrom Mushroom Farms traveled 200 miles from Sunnyside, Washington, to picket the Metropolitan Market in Seattle on Nov. 20. The workers demanded the upscale Metro Market support them in their struggle for union recognition of the United Farm Workers. They asked that the Market communicate this commitment by observing ethical purchasing practices. 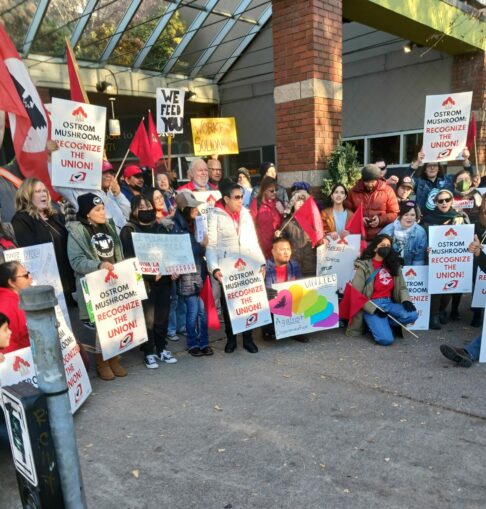 Ostrom Farms is a large agribusiness in the hugely profitable mushroom industry. The mushroom workers held a rally with solidarity messages from Starbucks Workers and other community groups. The Ostrom workers were demanding fair pay, safe working conditions, equal opportunities and respect in the backbreaking agricultural industry. Over 200 Ostrom workers signed a petition to Ostrom in June, making these demands.

A committee of the workers met with Ostrom management in August and was able to win the back wages the company had owed to many workers. Then Ostrom began to refuse to meet with UFW representatives; so in September, they marched on company headquarters with a strong majority of workers supporting the UFW. Ostrom still refused to respond to them.

Over the last two years, from January 2021 to May 2022, Ostrom has fired over 140 of its very experienced mushroom workers; most of them were women. Then the company hired 65 temporary agricultural workers, who are also very exploited, under the federal H-2A program for non-U.S. workers. All but two of these workers were men.

As the company was firing its majority-women workers, it blatantly posted a job advertisement on Facebook seeking “only males” to work at the firm. Washington State Attorney General Bob Ferguson has filed a lawsuit against Ostrom, charging that the company abused the H-2A system by deliberately and systematically firing female workers to replace almost exclusively with male workers. The lawsuit  charges the company with retaliation against workers who have spoken out against mistreatment. (thestand.org, Nov. 14)

These efforts by bosses to divide the workers may well backfire as workers unite to fight back and demand respect for their union and no discrimination.