“Oh workers, can you stand it? Oh tell me how you can? We’ve got to stand up for our rights, not fall for Schultz’s scam!”

Singing a new verse to the old union standard “Which Side Are You On,” voices harmonized in the cold, damp Portland air outside the Garden Home Starbucks Nov. 27. Already unionized, workers at that location were on the last day of a three-day strike and spirits were as high as ever. 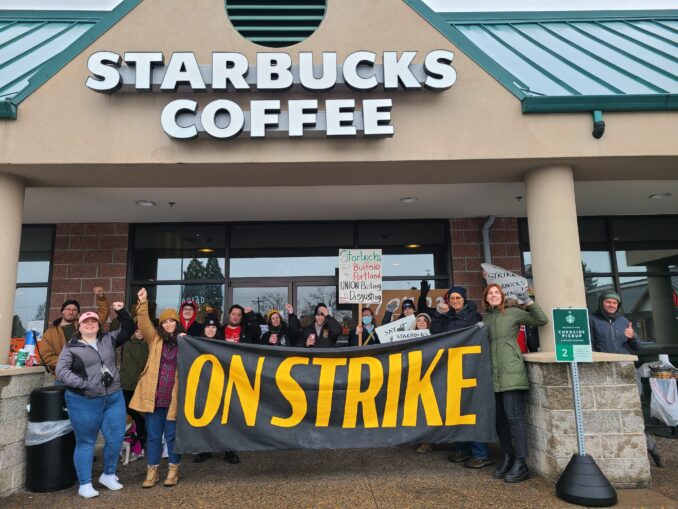 Why go on strike after winning a union? Because they know that one victory is not a total victory. Unionizing is only one step, albeit an important one.

Six-year Starbucks veteran Riley McNutt cited the withholding of benefits as a major reason for the strike and that the corporation had stopped tipping via credit card at unionized locations. “That’s significant,” she said. “Workers at stores with credit card tips are sometimes making twice as much.”

This discrimination is illegal, but Starbucks doesn’t care. Like Amazon, the coffee giant proudly busts unions in flagrant disregard of the law. But the workers aren’t frightened by the threat. In fact, McNutt says it’s an incentive to unionize! The bosses are only exposing their cruelty and lack of trustworthiness. Customers have noticed that they can’t tip the Garden Home workers by credit card and have asked about it. When told the reason, they get upset by the injustice.

The Starbucks workers maintained a unified front, with every single staff member at that location showing up to picket throughout the three days. Across stores, they’ve worked closely with unionizers in Seattle.

Support from the community has been solid, judging by the pile of food donated to keep the strikers going. Worker solidarity was on display, with union members from Amazon and the Teamsters present. Hailey Espinoza, who has worked at Starbucks for 4 ½ years, spoke on their strong relationship with the nurses at St. Vincent Hospital. She says that after marching with the nurses, the nurses returned the favor by showing up to their strike. Most people who show up stay for a long time.

“Unions give workers power, and that’s a good thing,” McNutt asserted. “It can definitely be daunting, but there are those in the community who want to help.” She said that for every five positive reactions to the strike, they do get one negative response. But with a grin, she followed up with “We’re used to it; we work at Starbucks.”