Workers in Britain have been in motion conducting walkouts and strikes, with hundreds of thousands of workers expected to carry out more labor actions before the new year. Rail workers have led the charge, encouraging workers in a range of occupations to follow suit. 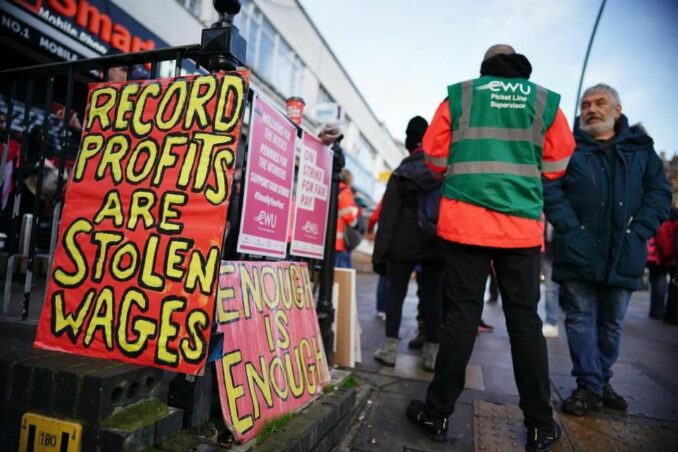 The labor actions started when consumer inflation hit a 40-year high of 10.1% in July, followed by a 41-year high of 11.1% in October. Rail workers, under the leadership of the Rail, Maritime and Transport Workers Union (RMT) were among the first to take a stand, holding several strikes to demand higher pay to keep up with the increased cost of living. Over 40,000 rail workers are set to go on strike again Dec. 13-14, Dec. 16-17, Jan. 3-4 and Jan. 6-7. RMT leaders claim recent talks with rail bosses and Network Rail ended without resolution.

Dockworkers conducted port strikes in Liverpool and Felixstowe. Lawyers, call-center employees and tech workers in England and Wales walked off their jobs in the fall.

Thousands of postal workers, university lecturers and teachers went on strike Nov. 24, setting up picket lines at post offices, universities and schools throughout the country. Many plan on walking out again Nov. 30. Teachers in Scotland have conducted their first strikes in decades. Royal Mail workers, represented by the Communication Workers Union, struck a second day Nov. 25 — disrupting “Black Friday” — and plan to continue their walkouts intermittently between that day and Christmas Eve.

For the first time in 106 years, nurses at the Royal College of Nursing (RCN) are likely to go out, after 300,000 union members voted to strike for patient safety and a pay increase of 5% above inflation. Much like their fellow nurses in the U.S., nurses in Britain blame low pay for unsafe staff shortages and low retention rates.

Feeling the heat, bosses have made concessions in some places, averting potential strikes. Just recently, the union Unite announced they had secured an 11% increase for roughly 150 members at a Heinz factory at Telford in Shropshire. Unite was able to secure a raise of 11.5% at other workplaces in the fall. As the British Marxist newspaper New Worker suggested, “Hopefully this is a sign that bosses are worried about taking on their organized workforce, but it could also be a sign that they have so much money in the bank that they can easily afford to pay up.”

The Tory-led Parliament has introduced a reactionary Public Order Bill designed to give the police greater power in cracking down on protests, particularly against those advocating climate justice. Many workers fear it is an excuse for the police to brutally and arbitrarily attack strikes and picket lines. The bill was promoted by Queen Elizabeth during one of her last speeches in May of 2022.

Union-busting tactics do not appear to be stopping workers in England, Scotland and Wales any time soon. The revival of worker actions has led to an uptick in union membership unseen in decades. Workers are learning from one other, and they are applying militant strategies to their own workplaces against their employers.