The following is a Nov. 6 interview of Steve Gillis by Anders Fenger of the electronic newspaper, Arbejderen (The Worker), produced in Denmark. Gillis was a school bus driver in Boston for 37 years and has been elected to every office in United Steelworkers Local 8751, which has a membership of 1,000 workers, including the president. Edited by Workers World.

​​Anders Renger: As a trade union-active person, what do you think about the U.S. midterm elections?

Steve Gillis: The most important elections have been the union elections. Since February 2020, when the workers at an Amazon warehouse in Bessemer, Alabama, took their first vote about joining a union, we socialist trade unionists have focused on literally hundreds of elections to form a union. 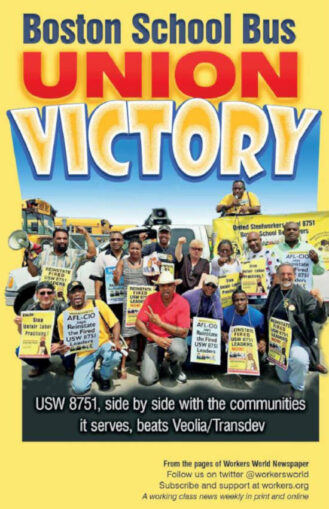 Workers in their 20s, with strong anti-capitalist feelings, have fought for these elections. There have been strikes. Bosses have fired hundreds of union organizers, which is illegal. The struggle has gone on at Starbucks, Amazon, Trader Joe’s, REI, Apple and many other places.

This past week in Boston, we celebrated the 15th Starbucks store in town to vote to go union!

The organizing drives have drawn some candidates, almost all Democrats, to “photo opportunities,” part of their campaigns. Few, however, even mention the life-or-death issues workers are raising, like COVID-19 safety on the job; livable wages and paid sick days; affordable and comprehensive health care that respects the needs of women, workers of color and LGBTQ2S+ workers; scheduling that allows workers time off to study, be sick or be with family; and so forth;

In the final weeks before Tuesday’s (Nov. 8)  midterm national elections, every Democratic candidate has framed the issue like President Joe Biden did this week, as an election to “save democracy.” In the U.S. the only choice is between these Democrats and the far-right candidates of the Republican Party, who attempted a violent coup on Jan. 6, 2021.

AF: Can the elections change anything?

SG: The midterm elections have already changed the political landscape in the U.S. Both capitalist parties have pushed the political discourse far to the right. Candidates whose politics are pro-fascist are likely to gain more seats in the U.S. Congress and local government administrations.

The richest members of the ruling class of the U.S. are using the midterm elections to wage an all-out open war against the young workers who are organizing to stop this new upsurge. Elon Musk — arguably the richest individual in the world — publicly fired half the workers at Twitter Friday [Nov. 4].

Here, the Democrats may sweep, but here is only the small state of Massachusetts.

Elsewhere in the U.S., the pro-Trump Republican Party candidates have pushed the political debate so far to the right that they drag their Democratic opponents along with them.

Example: In New Hampshire, the Republican candidate for the U.S. Senate is a retired U.S. Army general, who did 10 tours of killing-duty in Afghanistan. He is an open white supremacist. He openly condemns the global Black Lives Matter movement  immigrants and LGBTQ2S+ people; calls for 100,000 new cops and more jails; more economic sanctions and military attacks, especially against China; a national ban on abortion and union rights; and privatization of Social Security and Medicare.

The Democratic incumbent’s commercials also call for more cops, less taxes on the wealthy and corporations, prosecuting the U.S. war against Russia in Ukraine harder and saving “democracy” from those who “go too far.”

AF: Does it matter whether the workers vote Democrat or Republican? Will you encourage workers to vote blank or stay away from the election? There are several referendums connected to the election on Nov. 8.  Which one of them matters?

Remember there is nearly a total absence nationwide of workers’ and socialist parties who can compete with the ruling class’s two well-funded parties. Still, in many states and regions, working people face life-or-death problems.

For example, obtaining abortions and other reproductive health care, whether undocumented workers’ families are rounded up and deported; whether our unions can legally operate or be legally smashed; whether our transgender children, family and co-workers are openly hunted and abused; if the teaching of history of the settler-colonial, slavery-based origin of this country is criminalized; whether landlords and banks have legal carte blanche to evict us from our homes; and more. These are real matters at stake in states across the country in these midterms.

Important referendums have been popularly organized — through much street-based work and union funding — to re-legalize abortion, tax the superrich, allow drivers licenses for undocumented workers, end the racist “war on drugs” and legalize harm-reduction tactics like Safe Consumption Facilities, provide better health care to workers, outlaw the legal fraud of “independent contractor” status for millions of gig workers at Uber, Lyft, DoorDash, Amazon, and other issues. Hell yeah, we should get out and vote there on Tuesday, if we’re able!

Then on Wednesday, Nov. 9, we should be prepared to vote with our feet in the streets against our unbridled, largely unelected, lifetime appointed enemies in the Supreme Court, who are steamrolling back our legal rights, and mobilize against the organized criminals at the Federal Reserve Bank, who are calculating overtime to crush our wages and push millions of us back onto unemployment rolls.

AF: What do your colleagues at work think about the midterm elections? Will they vote?

SG: I spent four days last week in the bus yards, meeting with hundreds of my co-workers, one-on-one, discussing their pensions. Some 95% of my co-workers, including the union’s president and elected leadership, are immigrants from Haiti. The main topic they wanted to discuss — besides the Wall Street theft of their investment funds — was how the U.S. is once again orchestrating another brutal military/police occupation of their homeland, the poorest place for workers in this hemisphere.

Some of my co-workers will drive long distances to vote during their lunch break — especially for a state “drivers licenses for all” referendum that all of us professional drivers support to stop discrimination against our undocumented co-workers. They vote far from where they work in Boston, where housing costs are too high for them to live.

Some won’t be able to vote, because election day is not a holiday. My co-workers are talking about being deeply concerned with the possible comeback of racist politicians aligned with Trump, who early in his presidency called their glorious country of Haiti “a sh–hole” They don’t like the Biden administration either, which has detained and deported more Haitian people than any previous administration.

AF: What should be the biggest theme of the election? What is the biggest problem/dilemma for the working class in the United States?

SG: Unquestionably, the biggest issue of the elections should be the U.S. wars. The elections should be whether or not the workers — the small percentage of us in this country in unions and the vast tens of millions of unorganized workers — should have literally trillions of dollars of our taxed paychecks (the billionaires here are notorious for legally paying zero taxes) spent on blowing up pipelines, bridges, nuclear facilities, hospitals, global food supplies and diplomatic relations throughout the world, targeting Russia and China.

The theme should be immediately stopping these wars — and sanctions — that threaten the very existence of human life on the planet and in the U.S. Instead, these massive resources should be used to fund a war against COVID-19, against homelessness and poverty and for a national campaign for environment-affirming retooling of the entire energy system.

But the major issue of war is nowhere and never on the ballot. Discussion of the war was recently suppressed in Congress. The “Congressional Progressive Caucus” of the Democratic Party had to recant their very mild statement that called for peace negotiations with Russia to end the bloody war in Ukraine. Both the Republican Party and the Democratic Party are imperialist war parties.

U.S. wars, especially today with slaughter by proxy in Ukraine, are a major catalyst to the hammer that’s coming down on workers’ heads. Here and throughout the world, these wars are hastening the crises of the capitalist system, threatening workers in the U.S., Europe and everywhere — especially in oppressed nations in Africa, Asia, and South America, in what some call the “Global South” — with freezing and starving during winter, spreading pandemics and rapidly deteriorating global warming, extreme economic and political instability, and even nuclear catastrophe. This is giving rise to fascist-minded politicians all over.

AF: Does the power of money dominate the election?

SG: Of course, and there’s no attempt to hide the fact that these elections are bought and paid for, no matter who wins. The media here is breathlessly reporting on the stunning and record $17 billion spent to date, mostly by billionaires and petit millionaires, supporting both Democratic and Republican candidates in the 2022 U.S. midterms. Paying for influence is the definition and epitome of political corruption.

As elections are largely mass communication-influencer events, the richest men in the world are now perfecting total monopoly, along with their junior partners in the military-industrial-financial complex. They accomplish this through blatant purchase of the main, current U.S. mass media sources — Twitter, Facebook, Instagram, the Washington Post, TV news and more.

And they are accomplishing it through public slash-and-burn, “shock and awe” attacks against the workers and our unions, copied and pasted into the playbooks at Starbucks and Shell, Amazon and Raytheon, Walmart and West Point, McDonalds and Boeing.

SG: Reviving mass pickets and strikes — along with breaking with the Democratic Party’s straitjacket of confining workers and our unions to no-win elections and other legal processes — is where I think the U.S. labor movement, especially the unions and our resources, should turn on Nov. 9.

Our unions should refocus all of our available resources on supporting the blossoming, courageous young workers at Starbucks, Amazon and everywhere to defend themselves and go on the offensive against the brutal assaults being waged by their employers, the same billionaires who pay for the Democratic and Republican elections.