Union coal miners in Brookwood, Alabama, on strike since April 1, 2021, are stepping up plans for resistance. The job for the United Mine Workers (UMWA) locals now is to break through Warrior Met Coal’s threat to starve them out — and to move forward at the bargaining table. 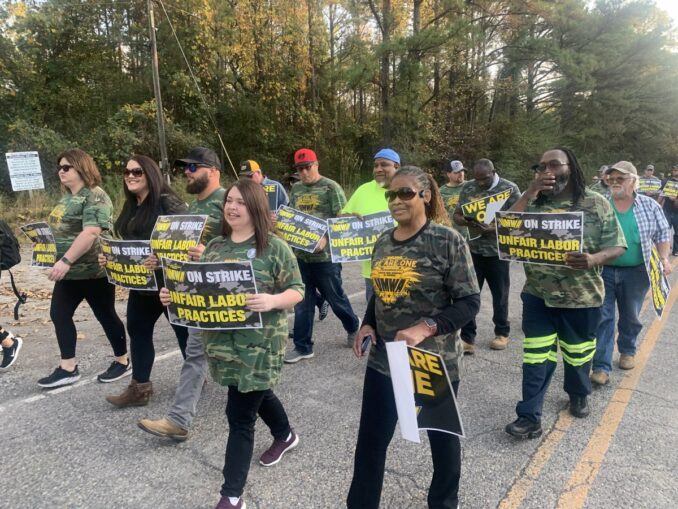 In what may become the longest coal miners’ strike in U.S. history, 1,100 workers walked out 20 months ago, with only 161 crossing the picket line. The miners gave serious wage and benefit concessions to save the company from bankruptcy in previous contracts — and then the company broke its “promise” to restore those cuts.

The pressure on the miners has been unrelenting. Scabs are escorted into Warrior Met by the Brookwood cops, who then harass the picketing workers with blue lights flashing. A state judge essentially barred strikers and supporters from bringing picket lines close to mine entrances.

With intense solidarity, the UMWA workers have fought back. They marched in Brookwood’s holiday parade last year wearing their carbide lamp hats and work overalls. They have traveled to New York City to rally and commit civil disobedience at Blackstone Financial, global investment backer of Warrior Met. They have picketed, held weekly rallies, given media interviews, rounded up supplies from food banks, connected to a countrywide labor network and more.

The first week in November, the miners made plans to block the road where scabs cross the picket line hiding behind local police escorts. Four members of the UMWA Auxiliary — three women who were former coal miners and current president Haeden Wright — volunteered to be arrested.

When news of the plan filtered out of the small Brookwood community, miners and supporters were threatened with fines of up to $200,000.

The blockade was put on hold for the moment. Instead, on Nov. 8, a convoy of buses unloaded miners, auxiliary members and supporters near the mine heads, accompanied by UMWA President Cecil Roberts and Secretary-Treasurer Brian Sanson.

To a soundtrack of union classics — from “Union Maid” to “Solidarity Forever” — the marchers made their way to the entrance of Number 4 Mine, chanting and waving yellow-and-black UMWA signs. Solidarity was strong as a busload of UMWA Local 2300 miners joined the crowd after a long drive down from western Pennsylvania.

Brookwood cop cars tried to herd the march and then formed a menacing ring around the protest. The strike has been smeared as “violent” in local media.

But Kris Mallory, special assistant to the UMWA president, told labor reporter Kim Kelly: “They’re painting this picture of us as, ‘These are people here to do violence.’ We’re just here to try to get a collective bargaining agreement.” (realnews.com, Nov. 7)

Mallory stressed that the union is planning to hold a new action weekly until they win their contract. UMWA, active in Alabama mines since 1890, has a long history of successful resistance.

UMWA Auxiliary, which organizes material support and movement solidarity, needs steady donations to help mine workers and their families stay strong during this showdown battle in class warfare. Send support to: Solidarity Santa: tinyurl.com/43r5fe4j and umwa.org/umwa2021strikefund.