In a June recall election, a coalition of wealthy real estate developers, corporate lobbyists and San Francisco Democratic Party hacks successfully ousted progressive District Attorney Chesa Boudin from office. This was 2-1/2 years after voters elected him as a reform candidate who pushed for decarceration. 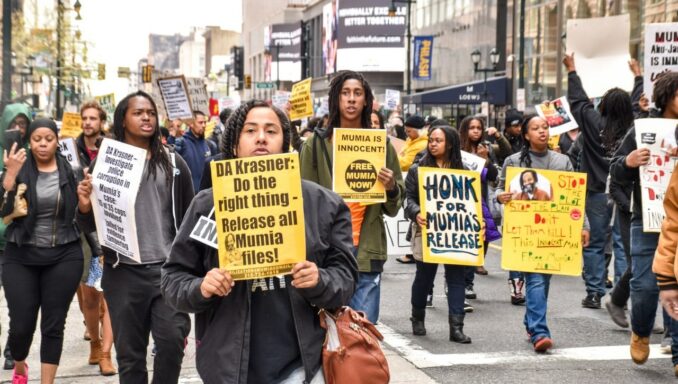 Claiming he “engaged in misbehavior in office,” Republicans, who have since lost majority control of the Pennsylvania House, impeached Krasner on Nov. 16. After Jan. 1, however, DA Krasner will be tried in the state senate, where Republicans no longer hold the two-thirds majority required for conviction and removal from office.

Ironically, many of the Pennsylvania Republicans who lost their legislative seats in midterm elections focused their campaigns on crime, running ads repeatedly depicting Philadelphia as a city overrun with violent mobs and blaming Krasner for the spike in gun violence.

The ads mentioning Krasner were largely targeting Democrat John Fetterman, who ran for U.S. Senate against Trump-backed Mehmet Oz, but they backfired, resulting in a win for Fetterman and Democrats taking control of the Pennsylvania House.

Both Boudin and Krasner were elected to office during a period heavily impacted by the militant Black Lives Matter movement, with millions of people in the streets protesting police violence and calling for judicial reforms. Like Boudin, Krasner ran on a platform advocating reforms of the police and incarceration system.

Krasner had a reputation as a civil-rights attorney who frequently defended victims of police brutality. He first won in 2017 by an overwhelming margin with broad community support, but little from the Democratic establishment. He was reelected in 2021 in a landslide victory against a candidate who was openly supported by the Fraternal Order of Police (FOP).

Upon taking office in January 2018, Krasner fired 31 prosecutors, many with reputations for prioritizing convictions over judicial fairness. He initiated an investigation of over two dozen crooked cops, who had been found to have repeatedly given false testimony and fabricated evidence. His office created the Conviction Integrity Unit to uncover cases of wrongful conviction, and to date, 25 men have been exonerated. His office also stopped prosecuting nonviolent offenses involving marijuana or sex work.

Because the FOP and the right wing of the Republican party could not stop Krasner from being elected, they sought other means to curb his authority.

When Krasner took office in 2018, political prisoner Mumia Abu-Jamal and his supporters had hoped he would allow Abu-Jamal’s appeal, already in progress, to result in a new trial.

Unfortunately, Krasner adopted his predecessors’ playbook, repeatedly blocking disclosure of new evidence until after a favorable verdict for Abu-Jamal in December 2018. Within days of that ruling, Krasner reported “discovering” several evidence boxes pertaining to the case in a remote storeroom in the DA’s office.

Krasner allowed Abu-Jamal’s attorneys access to the files and, despite initially saying he would appeal the ruling to give Mumia new hearings, gave in to community pressure and backed down in early 2019.

However, in late February 2020, while awaiting Krasner’s final response to additional petitions filed by Abu-Jamal’s attorneys — including one seeking a new hearing based on evidence found in the hidden file boxes — the FOP, fronted by Maureen Faulkner, widow of the officer killed in Abu-Jamal’s case, filed a rare King’s Bench petition seeking to remove Krasner from jurisdiction over the trial.

It was months before this petition was denied, which further delayed Abu-Jamal’s appeal hearings. The impeachment charges against Krasner came amidst the final hearings in Abu-Jamal’s appeal this fall. And in September, Krasner won a rare homicide conviction of a white Philadelphia police officer for killing an unarmed Black man following a car chase — the first such conviction in 44 years.

Unable to oust Krasner through the ballot, the FOP and their right-wing Republican backers, with support from some conservative Democrats, are now seeking to bypass the elections and remove him through impeachment.

Workers World will not waste space repeating the felonious charges levied by the far right against Krasner. While there has been a rise in some violent crimes in Philadelphia, a number of other counties in Pennsylvania, many represented by legislators who are targeting Krasner, have reported much higher increases in the number of murders.

This same conservative-dominated legislature has repeatedly blocked efforts by Philadelphia to institute restrictions on gun sales. But neither action by the state legislature or the Philadelphia City Council really addresses the root causes of the violence.

Speaking at a rally at Drexel University on Nov. 17 to save low-income housing in West Philadelphia, Mel Hairston with Save the UC Townhomes laid the blame squarely on capitalism and said that youth raised in a stable housing environment, with access to safe recreation areas, nearby schools and support services are far less likely to resort to violence. Hairston raised that the Pennsylvania legislature has done nothing to address any of these economic and social concerns.