An unprecedented strike of academic workers that began Nov. 14 hit all 10 campuses of the University of California like a ton of bricks. This is the largest academic strike in U.S. labor history. 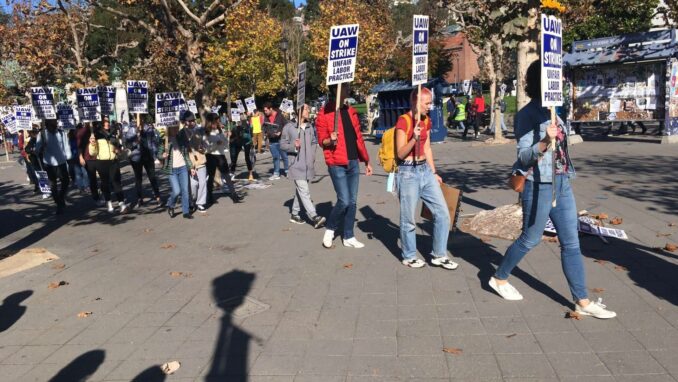 The 48,000 striking workers perform the majority of the teaching and research work at UC. Yet the pay and benefits for these workers, members of United Auto Workers Locals 2865 and 5810 and Student Researchers United-UAW, are far too low, especially for the high cost of living in California. That’s why a clear majority (36,558) voted to authorize an Unfair Labor Practice strike at mass meetings at UC campuses across the state.

“We’re fed up,” they said, citing the high percentage of academic workers suffering from “housing and food insecurity,” with many living in cars, or “couch surfing” for months at a time or putting up with long commutes to get to work every day. Unaffordable child care and rents were other key issues. (fairUCnow.org)

The UC Regents, who run the university and represent the most powerful business interests in the state, have so far refused to bargain over wages.

“What’s Outrageous? — Poverty Wages!” is a popular strike chant. The UC system holds $155 billion in investment assets and some administrators have salaries around $500,000.

Solidarity from other unions has been a big boost for the strikers. Two days into the strike, members of three construction unions stopped work on a new building at UC Berkeley. More construction workers honored UAW picket lines Nov. 18 at the UC San Francisco-Parnassus campus, after the Building Trades Council voted for strike sanction.

At another UCSF facility, Teamster-represented UPS drivers circled the block, honking continuously, and refused to cross the picket line. The Teamsters union’s national leadership has instructed workers that there would be no retaliation for honoring the picket lines. Even nonunion Federal Express drivers drove away without making deliveries.

On the other coast, 1,600 adjunct faculty at the New School in New York City, members of UAW Local 7902, have been on strike for better compensation since Nov. 16.