The U.S. Supreme Court heard arguments Nov. 9 on the case of Haaland v. Brackeen, which could overturn the Indian Child Welfare Act. 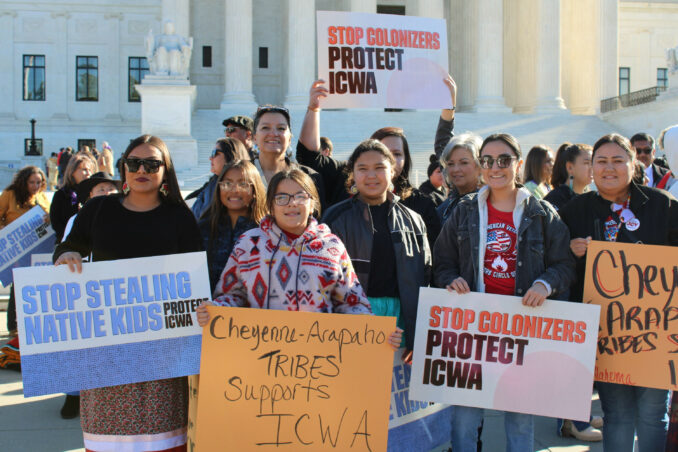 Passed by Congress in 1978, ICWA has given Native nations jurisdiction over the foster care placement and adoption proceedings of children with tribal citizenship living on their sovereign territories. This has offered Indigenous families a measure of protection from the U.S.’ ongoing settler-colonial genocide, which has targeted them for centuries.

In the two centuries prior to ICWA’s passage, U.S. authorities kidnapped thousands of Indigenous children and either sent them to boarding “schools,” where abuse was rampant, or trafficked them to white, predominantly Christian households through sham “adoption” proceedings. Often, these children were “bought” and “sold” as commodities, through a network of state and religious organizations. A 1952 letter from one such human-trafficking agency, “The Tekakwitha Indian Mission,” thanked a white couple who “adopted” a Native child for $10.

During this period, racist social service agencies removed up to 35% of all Indigenous children from their families. Of those children, 85% ended up with non-Indigenous families, even in cases where relatives were ready and willing to adopt them.

Although ICWA contains crucial protections, Indigenous families remain at risk of family separation, which the United Nations unequivocally recognizes as genocide. Article II of the U.N. Convention on the Prevention and Punishment of the Crime of Genocide defines genocide as including “forcibly transferring children of the (targeted) group to another group.”

Today, 15% of Native children enter the U.S. foster system before they turn 18, compared with 5% of white children. Without ICWA’s protections, Native children would have no recourse at all against the U.S.’ continuing genocidal mass kidnapping regime.

Haaland v. Brackeen serves as the stalking horse for the campaign to expand this regime and, by doing so, destroy tribal sovereignty. The plaintiffs in this case are a non-Native couple, the Brackeens, who are trying to “adopt” a Navajo child, against the wishes of the Navajo Nation.

Behind the racist lawsuit

Representing the Brackeens pro bono is Gibson Dunn, a corporate law firm whose paying clients include MGM Resorts, Chevron and Shell — as well as Enbridge and Energy Transfer Partners, the companies behind the Dakota Access Pipeline. For decades, the gaming and fossil fuel industries have led the forces of capital in attacking Indigenous sovereignty. Tribal-owned casinos make tens of billions in revenue annually, while sovereign Indigenous lands contain up to one-third of all fossil fuel reserves claimed by the U.S. By striking down ICWA, casino and Big Oil interests intend to seize access to the resources and revenues they have long coveted.

The Brackeens’ lawyers allege that ICWA violates the U.S. Constitution’s Equal Protection Clause because it discriminates on the basis of race, and the bourgeois media has repeated this reactionary “reverse racism” lie in their coverage of the case. In reality, under ICWA, tribal citizenship — a political rather than a racial classification — determines adoption and child custody. In 1977, SCOTUS ruled in United States v. Antelope that “federal legislation with respect to Indian tribes is not based on impermissible racial classifications.”

As Ian Gershengorn, an attorney defending ICWA, emphasized during Wednesday’s oral arguments, even the U.S. Constitution admits that Indigenous nations are sovereign entities, with inherent power to self-govern and establish their own political categories, such as citizenship.

“From the very first moments of our constitutional history, Congress has legislated for Indians,” Gershengorn said. “The idea that somehow doing so violates the Equal Protection Clause or is an impermissible racial classification just seems to me impossible to square with [the Constitution’s] text.”

A few justices showed signs of agreement with Gershengorn’s arguments. Elena Kagan acknowledged that “Congress said things like, there’s no resource that is more vital to the continued existence and integrity of Indian tribes than their children.”

However, if a majority of the reactionary-dominated Supreme Court accepts the Brackeens’ “reverse racism” claims, its ruling could annul tribal sovereignty altogether. As an article by The Lakota People’s Law Project explains, such a decision “would position ICWA as the first domino to fall, potentially leading to the erosion — or total erasure — of Native rights in the only homeland Indigenous North Americans have ever known.” (lakotalaw.org/news/2021-09-17/icwa-sovereignty)

This unprecedented threat to tribal sovereignty has prompted massive Indigenous-led resistance across the continent, with 486 Native nations and 59 Indigenous organizations submitting amicus briefs in defense of ICWA. The day SCOTUS heard arguments in Haaland v. Brackeen, hundreds of Indigenous activists and allies rallied on the steps of the Supreme Court. Many expressed frustration at the profound ignorance of Indigenous sovereignty, shown by most of the justices who will decide ICWA’s fate.

“Three hours of agonizing arguments and they do not understand the basic concept that we have inherent sovereignty and rights to the future of every single Native child born into this generation,” said Fawn Sharp, President of the National Congress of American Indians.

Inside the Court, guards tried to remove Samantha Maltais, a citizen of the Aquinnah Wampanoag, claiming her traditional regalia was “a political statement.” Maltais refused to leave, and the guards backed down, letting her stay.

The high court will likely not hand down a ruling on ICWA until June 2023. That its fate remains uncertain underscores the need for full solidarity with Native nations in their battle against the genocidal U.S. settler-colonial project and in their ongoing struggle for tribal sovereignty and self-determination.