Unionized Seattle human services workers rallied at City Hall Plaza Nov. 8 to demand wage increases and better services for the homeless. With the rising cost of living, austerity has forced many of these workers, stuck with low wages, to quit, leaving 300 vacant positions for homeless services. Seattle Mayor Bruce Harrell has offered workers only 4%, but the cost of living has increased 7.6%, which is a conservative figure. 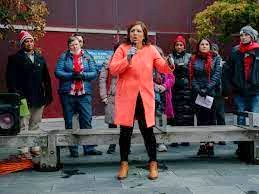 Government budget cuts are adding to the crisis. The King County Regional Homeless Authority warns that $9.4 million in government funds for shelter, rapid rehousing and outreach are about to expire. The authority said 20 programs at 12 agencies would lose an average of 40% of their funding.

Meanwhile the City of Seattle is spending an outrageous $160 million to build a new “shark tank” aquarium, which now needs more money.