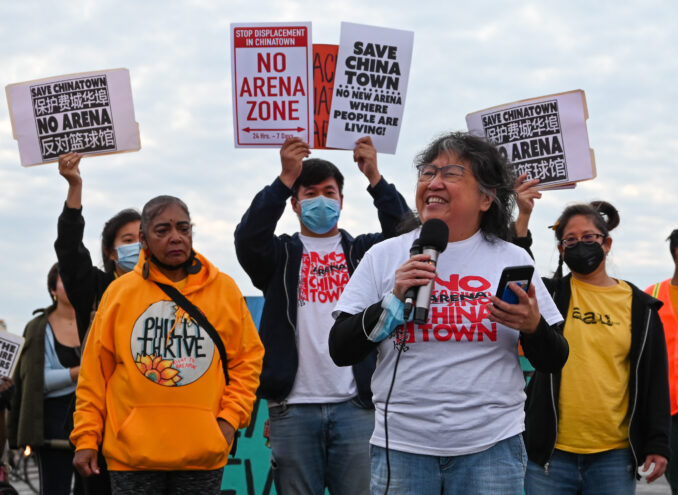 Close to 150 people, representing over a dozen diverse multinational, working-class Philadelphia neighborhoods, rallied together at FDR Park in South Philly Nov. 12 to demand a say by residents in what developments are allowed by the city.

The “Democracy Over Development” march took on the historic refinery redevelopment in South Philadelphia, the threat of evictions of U.C. Townhomes residents in West Philadelphia and the fight to stop the construction of a new basketball arena in Chinatown.

Participants also raised the destruction of old growth forests and wetlands, as the city’s Parks and Recreation Department continues to sell off public land for private development. A member of Cobbs Creek Environmental Justice described the sale of 100 acres of public land for $1 to a suburban developer expanding a golf course in the Cobbs Creek area. The developer clear-cut 100 acres of old growth forests, destroying important habitat for wildlife and threatening nearby waterways.

At FDR Park where the rally began, a spokesperson for Save the Meadows reported how 55 acres of South Philly’s FDR Meadows and wetlands have been clear-cut by Parks and Recreation to build new sports facilities, including professional soccer fields. Philadelphia has been chosen as a host city for the 2026 FIFA World Cup, and plans are underway to destroy an additional 90-100 acres of habitat vital to wildlife.

Other organizations that participated in the rally and march included Save the U.C. Townhomes, Save Chinatown, Vietlead, Asian American United, Philly Thrive, Party for Socialism and Liberation, ACT UP and Workers World Party.

A lively march, led and energized by a dynamic drumming group, followed the rally. It first stopped at the intersection of Passyunk and Penrose to remember the plight of former residents of the Passyunk Homes, a low-income public housing project near there, which was built on land contaminated by leaks from oil tanks owned by the Sunoco Oil refinery. After many residents became sick and died, including from cancers, the homes were torn down 20 years ago.

Speakers noted that despite the risks, new development is expanding on the environmentally hazardous site. A sign by Sienna Place developers advertised luxury homes there starting at $600,000. A “buyer beware” notice should have been posted.

Further down Penrose at 26th Street, demonstrators spread out to take over the entire intersection and blocked multiple traffic lanes in all four directions for half an hour. This stop was near the site of the former Philadelphia Energy Solutions refinery, where in June 2019 a chemical explosion and fire endangered refinery workers, people living nearby and potentially major sections of this high density area.

Since that refinery’s demolition, neighbors organized with Philly Thrive to uproot 154 years of environmental racism; they have demanded that any redevelopment include their input and that it invest in surrounding neighborhoods. However in March 2021, Hilco Redevelopment Partners was able to purchase the 1,300-acre site for $225.5 million for a “mixed-use site” called The Bellwether District.

It is unclear what, if any, voice neighborhood residents will be given in this project and just how much cleanup will actually occur there.

The timing for this march was no coincidence. In November 2023, all seats on the Philadelphia City Council are up for election, as is the position of mayor. The election just past has demonstrated the power of grassroots organizing to pass referendums protecting abortion rights. This lesson was not lost on rally participants seeking environmental and housing protections.

This coming together of multiple multinational, working-class communities, who are fighting displacement and environmental destruction by billion-dollar investors, marks an historic first in Philadelphia. After decades of fighting on their own, these communities are learning they have more power when they join forces and fight together. Today’s action demonstrated the potential to make all these movements stronger through unity.