The U.S. has attempted to assert control over the sovereignty of Haiti for over 200 years — from the 1804 economic sanctions imposed when Haitians freed themselves from enslavement and established an independent country to the 2004 kidnapping and exile of democratically elected President Jean-Bertrand Aristide — to this very day. 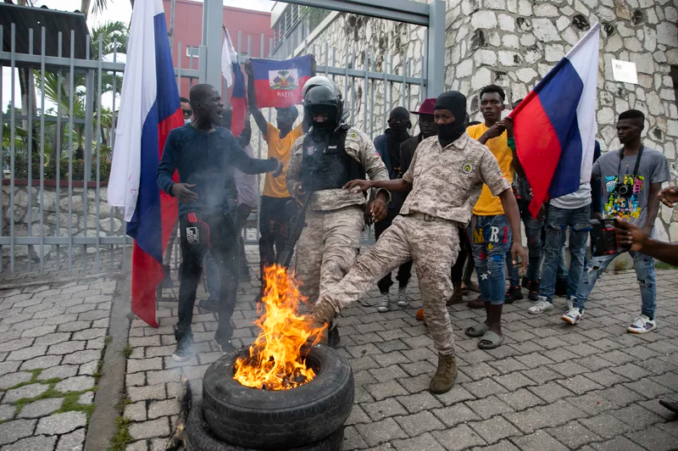 Haitian police, attached to the de facto, neocolonial government of Prime Minister Ariel Henry, attempt to break up a protest where Haitians are in opposition to an international military force, Port-au-Prince, Oct. 24.  Credit: Odelyn Joseph

In the past when the U.S. intervened in Haiti, U.S. forces and its imperialist allies had the guns, and Haitians had machetes — and the guns won. Over the past few years, Haitians have acquired hundreds of thousands of guns, some of them high-powered, according to the U.S. Department of Homeland Security.

Over 200 armed groups are operating in Haiti. Some of them are engaged in kidnapping and extortion, while others are defending their neighborhoods and providing some security, something the state does not do. Road blockades are common. Official United Nations resolutions, official U.S. statements and the worldwide bourgeois media refer to these groups as “gangs,” which is a racist smear.

How does the U.S. try to intervene?

One impact of these weapons was seen in the Oct. 28 assassination of Eric Jean-Baptiste, a prominent politician, former presidential candidate and general secretary of the Rally of Progressive National Democrats, along with his bodyguard/driver. They were driving in Jean-Baptiste’s armored car, which was flipped over by the force of the weapons used to kill them.

The United States and the international bourgeois media immediately blamed this attack on local armed groups, with no possibility that this was a destabilization attempt backed by the U.S.

The last week in October, the U.N. Security Council claimed the security and stability of Haiti could be “improved” by allowing actions to be taken against individuals and groups. Immediately, the United States, acting on its own, imposed sanctions on two prominent Haitian senators, accusing them of ties to armed groups “running drugs.” A major U.S. Coast Guard cutter is now on patrol off of Port-au-Prince.

While the U.S. by some accounts doesn’t appear to have many “boots on the ground” in Haiti, it has in fact been flying in Armored Personnel Carriers, which appear from videos to be very similar to light tanks. Once these are at the Port-au-Prince airport, the U.S. turns them over to the Haitian National Police.

Around Nov. 5 the police used one of these APCs to remove the blockade held by an armed group on Haiti’s petroleum port, Varreux, which is in Cite Soleil. The international media hailed this as a great victory.

But some drone videos on YouTube estimate there are at least 20 blockades in Cite Soleil, the poorest neighborhood of Port-au-Prince — blockades that would have to be removed for gas and diesel fuel to move freely. Meanwhile, at least one Maltese tanker with fuel from Curacao was docked at a different terminal.

The Haitian masses say ‘No!’ to intervention

Hundreds of thousands of people have repeatedly demonstrated in the streets of Haiti since August. These demonstrations ignited when the unelected government doubled the price of fuel.

The demonstrators have raised other issues: hunger; the nearly total absence of any government services; widespread public violence including extortion, kidnapping and carjacking; the rise of cholera and other epidemic diseases; the high cost of basic necessities like fuel and food. Most schools have closed, health care is scarce, sanitation nonexistent except in well-off neighborhoods.

The last bourgeois election in Haiti was in 2019, and almost all electoral mandates have expired. De facto Prime Minister Ariel Henry was essentially appointed by the neocolonial and imperialist Core Group, made up of ambassadors from the U.S., Canada, France, Germany, Spain, Brazil, the European Union and the U.N.

U.S. Assistant Secretary of State for Western Hemisphere Affairs Brian A. Nichols explained on PBS that the United States firmly supported Henry because he ended the subsidies on fuel and food. (Oct. 26)

No matter that this action drove the mass of people into the streets! Henry was saving the bourgeoisie money.

In addition to the Haitian flag, the flags of the People’s Republic of China and of Russia are often displayed in the people’s protests to indicate their rejection of U.S. intervention.

If the U.S. intervenes directly, it will first have to figure out how to overcome the armed rejection of intervention by the vast majority of Haitians — citizens of the first country in the modern world where enslaved people liberated themselves and declared their land independent.