For the 30th time since 1992, the United Nations General Assembly voted overwhelmingly 185-2 on Nov. 3 to end the criminal U.S. blockade of Cuba. This historic vote was virtually absent from the big bourgeois media reporting, such as the New York Times and Washington Post. 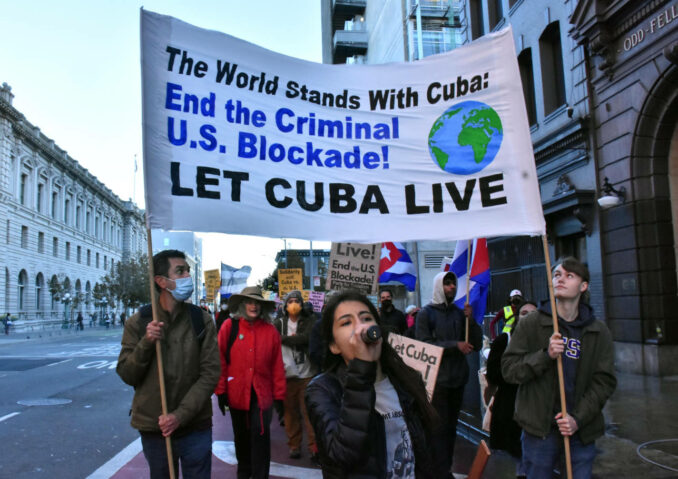 The blockade, first implemented by the Kennedy administration on Feb. 2, 1962, has banned U.S. trade and financial transactions with the Cuban people, including medicines and other essential goods, since that date.

The blockade is the U.S. punishment of Cuba for carrying out a socialist revolution — led by the July 26th Movement — on Jan. 1, 1959, with the defeat of the U.S. puppet regime of military dictator Fulgencio Batista.

The U.N. vote is symbolic and nonbinding, since only the U.S. Congress can overturn the blockade. The vote does signal the deepening isolation of the U.S. from the rest of the world.

Not surprisingly, the only two countries who voted no against resolution A/76/405 — entitled “Necessity of putting an end to the economic, commercial and financial blockade imposed by the United States of America against Cuba” — were the United States and its staunch ally, the racist Israeli settler regime. Two abstentions came from Ukraine and the fascistic Jair Bolsonaro government in Brazil, recently defeated in national elections there. 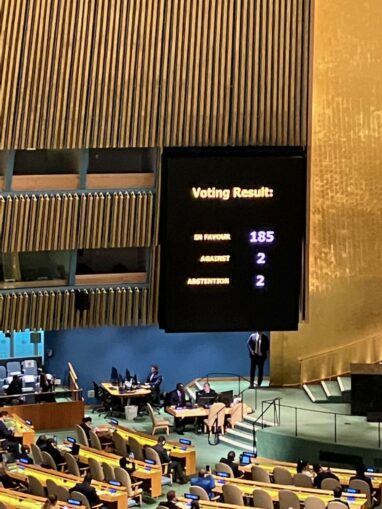 Representatives from different countries spoke on Nov. 2 and Nov. 3 to express their support for ending the blockade, a human rights violation which runs counter to a number of U.N. declarations, including the right to national sovereignty.

Those speaking from around the globe expressed their appreciation toward Cuba for the almost 60 health brigades the country has sent to over 40 countries, especially during the pandemic. Cuba has carried out these and many other acts of solidarity, despite the hardships the blockade has imposed on the Cuban people. There was also a call to remove Cuba from the U.S. state terrorist list.

On Nov. 3, Cuba’s Minister of Foreign Affairs, Bruno Rodríguez Parrilla, presented a 25-minute report before the U.N. General Assembly outlining the historic and present-day impact of the blockade. He received much applause from the delegates on his report.

According to Granma, the report stated “that only between August 2021 and February 2022, that unilateral policy caused Cuba losses in the order of $3,806.5 [over $3.8 billion] million. The figure is 49% higher than that reported between January and July 2021 and a record in just seven months.

“At current prices, the accumulated damages during six decades of the blockade amount to $150,410.8 million [over $1.5 trillion], with a great weight on sectors such as health and education, in addition to the damage to the national economy and the quality of life of Cuban families.

“In the first 14 months of the Biden administration alone, the losses caused by the blockade amounted to $6,364 million [over $6.3 billion], which is equivalent to an impact of more than $454 million a month and more than $15 million a day, according to the document.” (Nov. 3)

Gala stated, “Cuba does not need lessons on democracy and human rights, much less from the United States. If the United States government was really interested in the welfare, human rights and self-determination of Cubans, it could lift the blockade.” (Reuters, Nov. 3)

Gala then cited U.S. human rights violations, using vital statistics in the areas of mass incarceration, including disproportionately those who are African Americans, migrants and minors, as well as police killings of people of color.

The writer was part of a delegation, along with other Cuba solidarity activists, who were present at the Nov. 3 vote.