The pop and jazz standard “Mack the Knife,” taken from Bertholt Brecht and Kurt Weill’s “The Threepenny Opera,” describes the greed and violence of a London mob boss.

But Mack the Knife’s ill-gotten gains were mere pocket change compared to those of the world’s richest man.  Elon Musk, whose father became rich as the owner of an emerald mine in South Africa during apartheid, is currently worth an estimated $208 billion! As soon as he acquired Twitter for a cool $44 billion, Musk the Knife laid off half the global workforce of 7,500 workers.

Many workers only realized their jobs were among those cut, when their company email accounts were abruptly deactivated without warning.

An email informing laid-off workers of their fate, impersonally signed by “Twitter,” cynically insisted, “This action is unfortunately necessary to ensure the company’s success moving forward.” Musk’s layoffs of U.S. workers may be in violation of the federal Worker Adjustment and Retraining Notification Act, which requires 60 days notice of mass layoffs, and several laid-off workers in California have filed a class-action lawsuit on that basis. (nbcnews.com, Nov. 4)

Coupled with the mass layoffs was a loosening of content rules — i.e. making hate speech permissible again. Openly racist tweets surged, and rumors spread that former President Donald Trump would have the suspension lifted on his Twitter account — proving true the warnings of civil rights groups that toxic messages would increase once Musk applied his notion of “free speech.” 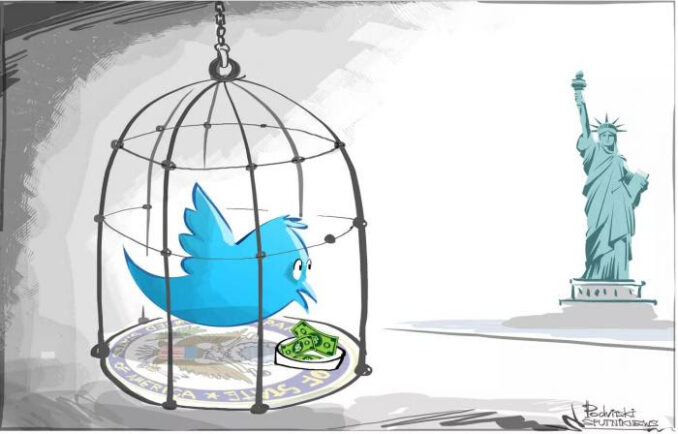 Musk’s immediate cuts included Twitter’s human rights and disability experience teams. The social media platform takeover raises questions: Will Musk, while he allows hate speech to flourish, use his control of Twitter to impede its widespread use by union organizers at Starbucks and Amazon?

Sandra Sucher, a professor of management at Harvard University, called the suddenness of the layoffs “particularly inhumane.” But Musk’s brutality is par for the course under capitalism.

In the past few years, platforms like Facebook and Twitter have censored accounts which are alleged to have official ties to the Cuban government. Writing in “Granma,” the official voice of the Cuban Communist Party’s Central Committee, Michel E. Torres Corona explained the class character of these social media companies: “It was the naïve dream of some of the brilliant minds behind the creation of the internet: The digital extension of our pathetic physical existence would erase all contradictions, all inequities; it would place human beings on a plane of complete horizontality.

“But the human cannot run away from the human, not even when it is organized in the form of algorithms and binary codes. Power, that old problem of our species, which dates back to the times when we became ‘political animals,’ ended up infiltrating virtual Eden, like the serpent in Paradise. Its bite continues to poison the heart of modern society: The analogical springs of the exercise of power (property, authority, money, class) remained and even strengthened with the new technologies.

“A digital network such as Facebook or Twitter, which someone might think of as a refuge against despotism or antidemocratic behavior, is nothing more than a product of a transnational company, whose main interest, by nature, is to obtain economic benefits.” (Oct. 28)

These mass layoffs may be just the tip of the iceberg, as recent job creation figures point toward a major economic slowdown. They may be a harbinger of things to come, as late-stage capitalism begins to approach the biggest crisis of overproduction in history.

Musk epitomizes the worst that capitalism has to offer. He is the product of a system driven to maximize profits at the expense of basic human needs.