Demonstrations were held in Los Angeles; Phoenix; Minneapolis; Washington, D.C.; and other U.S. and Canadian cities to demand an end to the U.S. blockade of Cuba. Below are two reports. 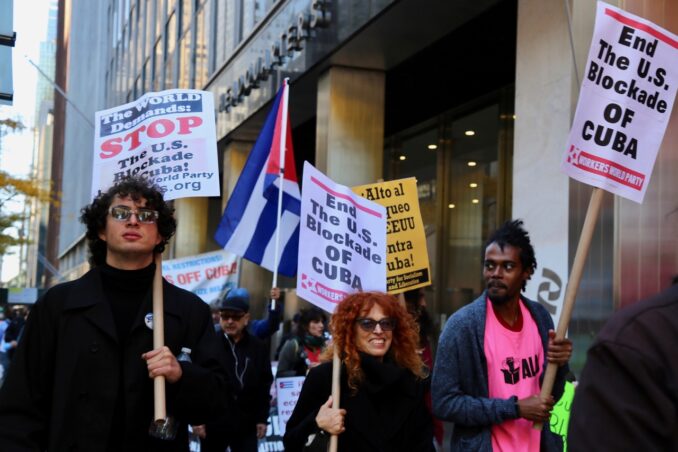 Hundreds of people gathered for a rally in Times Square, which was then followed by a march to the United Nations in New York City Oct. 29, to demand an end to the economic, commercial and financial U.S. blockade against Cuba. On Nov. 3, the U.N. General Assembly, for the 30th time, will overwhelmingly vote to end the criminal blockade, which continues to prevent needed medicines, food, fuel and other resources from reaching Cuba, causing great harm to the Cuban people.

In 2021 as per usual, the U.S. and Israel were the only countries to vote against an end to the blockade, with three abstentions — Colombia, Brazil and Ukraine.

Activists, students and community members in Portland, Oregon, protested the U.S. economic blockade of Cuba on Oct. 29. The rally and march were organized by the Portland Stop the Blockade of Cuba Coalition. John Waller, the coalition’s secretary, said, “For 60 years, Cuba has been the victim of bombings and other violent acts committed by U.S. citizens acting with the backing of the CIA. Cuba has never committed a terrorist act against the United States.” 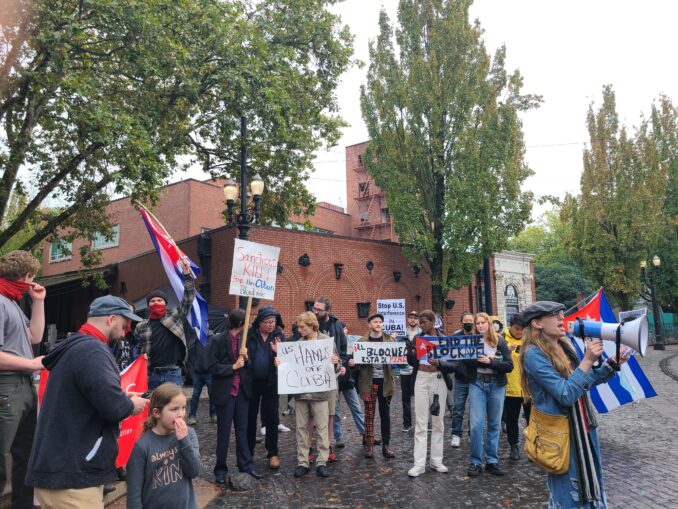 Maddi, from Workers World Party, remarked, “Cuba shows how much you can do with very little, as long as you’re willing to serve the people. When Hurricane Ian struck Cuba last month, it destroyed the power grid, tobacco farms and as many as 100,000 homes. But only three people in Cuba were killed. In the U.S., however, the hurricane has caused 118 deaths so far.”

Maddi talked about the passage of Cuba’s new family code: “LGBTQ+ couples can get married and adopt children. . . . Cuba has had strong trans rights for a while now, including free gender-affirming surgery. [Gestational] surrogates are legalized, so long as they aren’t doing it for a profit.”

Sarah Kowaleski, Portland Jobs With Justice organizer, said sanctions on Cuba “have created incalculable damage, to the tune of $150 billion in damages. Biden has doubled down on the embargo, tightening restrictions. We join the U.N. General Assembly and world community once again in calling for this to end!”