In 1987, the notorious racist Frank Rizzo was trying to claw his way back into Philadelphia City Hall. He had lost his reelection for mayor seven years earlier. Rizzo’s election platform could have been drafted by the Ku Klux Klan, who had endorsed the tyrannical cop 10 years earlier. 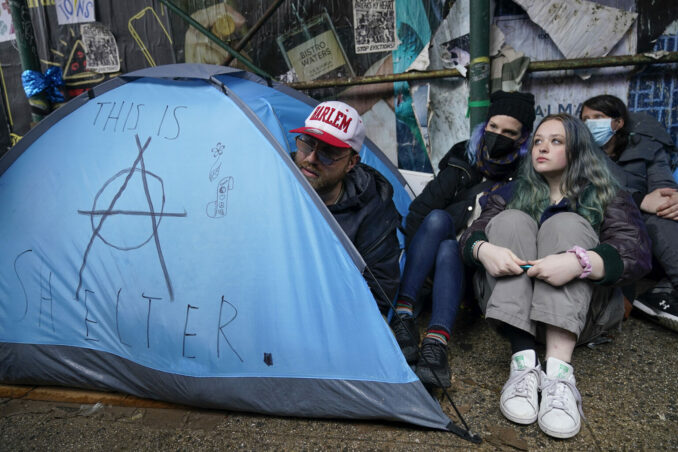 Homeless people and supporters, defending an encampment at Avenue D and Ninth Street, were arrested when cops swept through to demolish the living space in the East Village, New York City, April 6.

What was the tentpole issue of his campaign? Arrest all homeless people in the city for vagrancy. “Vent people,” he called them. “They can’t make their own decisions.”

At that time there were 15,000 people without housing in Philadelphia. Then-President Ronald Reagan’s disastrous neoliberal austerity policies had contributed to putting nearly 7 million people out of work across the country. Philadelphia was one of many cities gutted by deindustrialization. Joblessness, poverty and anger were visible on the streets.

“It’s only a humane act to get them off the streets,” Rizzo told KYW Radio that year. “We can’t have them lying out on the streets.”

Few bought Rizzo’s bleeding heart gambit to push through mass lockups. His reelection bid failed, and he died only a few years later, suffering a massive heart attack after walking through one of Philadelphia’s historically Black districts. But his policy prescriptions survived him.

In 1987 alone, over 100,000 people were locked up in prisons and county jails across the state of Pennsylvania. According to the state’s own statistics at the time, on the average a person detained there would remain under lock and key for 443 days — over a year.

Thirty years later, cops and sheriffs from Philadelphia to Los Angeles are committing Rizzo’s brand of police cruelty, as they carry out so-called “homeless sweeps.” Even liberal-minded proponents of this forced removal of the poorest members of our class claim the arrests are done out of compassion, as well as public safety. But that two-faced humanitarian rhetoric doesn’t change the inhumanity of the policy.

And no defender of this Rizzo-like approach to the housing crisis can answer this simple question from the unhoused: “Where are we supposed to go?”

We know that jails across the country are full of people awaiting trial, whose only crime is not being able to afford bail. The average annual income of people inside Philly jails is $4,500, according to a Citations Needed podcast.

Incarceration is not the solution to homelessness. It is one of the causes.

When a person goes to jail, for even one night, they are immediately at risk of losing their job and their home.

In California as of 2018 there were almost 92,000 people who had no form of shelter or housing at all; 70% of them — nearly 65,000 poor workers — had been incarcerated at some point in their lives. It is estimated that over 25,000 people who have been released from prison within the prior year were living on the street. (California Health Policy Strategies, 2018)

We can extrapolate this figure for the entirety of the U.S. Across the country, formerly incarcerated people are 10 times more likely to become homeless than the rest of the working class. Some 5 million people pass through U.S. prisons, jails and detention centers each year. The National Alliance to end homelessness estimates there are over half a million — 582,000 people — homeless and unhoused workers in the U.S. at any given time.

According to the Aug. 2 Los Angeles Times, “Tenants are often at the mercy of private landlords who conduct criminal background checks. Regulations restrict people from accessing federally subsidized housing if they’ve been convicted of certain crimes, including drug and sex offenses.”

We therefore can be sure that two things are true in the United States: that incarceration correlates with future homelessness, and that homelessness is an arrestable offense. This isn’t just a paradox. This is policy.