Billed as a chance to “network and shmooze with Philadelphia’s top real estate developers and professionals,” the Jewish Federation Real Estate (JFRE) meeting Oct. 21 became, instead, an opportunity to protest gentrifiers’ plans to build a $1.3 billion, 18,500-seat NBA basketball arena in Chinatown. 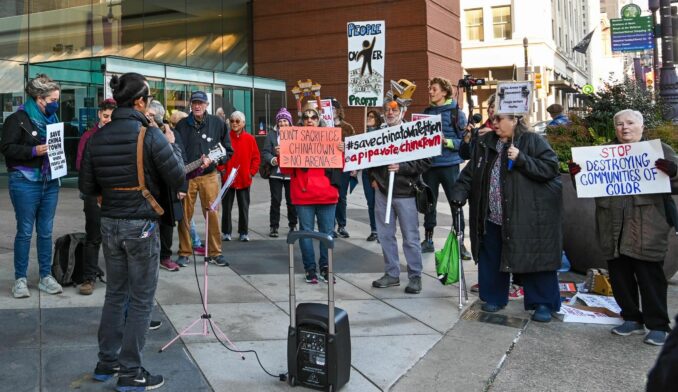 Dozens of people, organized by the Philadelphia Folklore Project in solidarity with the Save Chinatown Coalition, turned out with signs, banners, songs and chants. The protest participants — a majority of them Jewish — challenged the predatory development schemes being peddled by Philadelphia 76ers arena proponents and billionaire developers David Adelman and Josh Harris.

Chinatowns across the country have been decimated by sports arenas: the Kingdome in Seattle, Busch Memorial Stadium in St. Louis and the Capital One Arena in Washington, D.C. Over 3,000 Chinese residents in Washington’s Chinatown dwindled to just 300 after that arena was built in 1997. Philadelphia’s Chinatown is the last remaining community of color in Center City Philadelphia and one of the last vital and thriving Chinatowns on the East Coast.

Debbie Wei, of Asian Americans United, wrote in a Aug. 24 Philadelphia Inquirer article: “Chinatowns have existed across the United States for nearly 200 years, created out of necessity by Chinese immigrants who retreated into self-contained districts in search of safety from the beatings, lynchings and massacres that were often their lot in the highly segregated cities of our nation’s past.

“Excluded from most jobs as a threat to white laborers, the Chinese undertook ‘women’s work’ — running laundries and providing food service — to survive. From the fruits of this bitter history, Chinese Americans slowly fashioned a life and a future as part of the diverse American tapestry. Chinatowns became havens of linguistic and cultural security and familiarity.”

The 76ers’ proposed arena threatens to raise rents, overwhelm Chinatown with traffic during games and drive away elderly and lower-income residents. Residents will not want to live next to an area that resembles the dead zones around arenas and stadiums in other urban centers.

The protest at the Kimmel Center, where the developers were meeting, promises to be one of many actions over the next few months. Meanwhile, supporters are urged to sign a “Stop Playing Games With our Community” petition at: bit.ly/3U5rEeD.