France is in turmoil: Gasoline shortages affect more than 60% of households; inflation is increasing; oil company profits are off the charts. 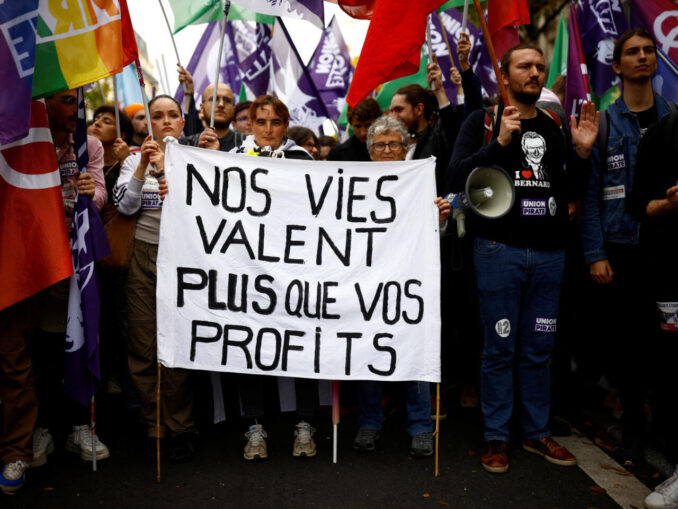 At the France Unbowed Party’s rally, Paris, Oct. 16, the sign reads ‘Our lives are worth more than your profits.’

The pay of oil company executives has jumped 52%, but the bosses bitterly resist raising production worker salaries by 10%. While many European countries have had strikes and protests, France is where hundreds of thousands of workers have taken to the streets.

The oil refinery strikes began Sept. 27 and are now in their third week. The strikes have closed about a third of all French gas stations, when these ran out of fuel, and created hours-long waits at the open ones.

Workers in at least one refinery have been “requisitioned” — legally forced by the government to go back to work — but gasoline and diesel are still scarce.

Workers at the largest nuclear power plant in France have reduced their output by a third in solidarity with the refinery workers. In France, 70% of the country’s electricity is generated by nuclear power.

In the General Confederation of Workers (CGT), whose chemical industry section called the strike, along with Force Ouvrière, Solidaires and some student and youth unions have called for a general strike Oct. 18 to defend French workers’ constitutional right to strike and to demand wages be indexed to inflation.

The costs of sanctions against Russia

In March 2022, Finance Minister Bruno Le Maire held a press conference to announce that the total bill for France’s support of European sanctions would be 25 billion to 26 billion euros ($27.5 billion to $28.6 billion). (France24, March 3)

In mid-September, journalists on French television estimated that to avoid a 120% rise in the cost of energy over the winter would require 15 billion to 20 billion euros. Given the temper of the masses, that was a subsidy deal President Macron couldn’t pass up.

U.S. sanctions on Russia, which the U.S. pressured the European Union to adopt, caused a lot of turmoil in Europe because the EU relied on Russia for much of its energy imports. Changes in energy supplies have been rapid, convoluted and costly.

For example, Germany is short of natural gas, which it uses for its chemical industry and heating. France could easily increase its imports, so it did and started to supply natural gas to Germany Oct. 13.

There have been a series of railroad strikes in Britain against the new prime minister’s anti-worker policies. In Germany, pacifist and ecologically-minded youth are protesting. In Prague, the protests against the EU and NATO have been directed against the “boomerang” effects their sanctions have on people in Europe.

France Unbowed (La France Insoumise), a left-wing populist French political party, called for an Oct. 16 march in early spring, with little consultation or endorsement by traditional unions. Despite that, about 140,000 people turned out to protest the current crisis in France, with a sea of red flags, competing sound systems and contingents from many towns and communities.

The rally demands had five main points: retirement at age 60; salaries to be raised to compensate for inflation; 1,100 euros given to every youth in France; prices, especially for gasoline, to be frozen; the superprofits of energy companies clawed back.

The success of the FI rally indicates that the one-day general strike scheduled for Oct. 18 will be successful.

What the rally and the general strike have ignored is the overall context of the struggles against U.S. sanctions and the worldwide inflation those are creating. The sanctions are an imperialist tool, designed by the U.S. and NATO to break up Russia and, once that goal has been reached, take on China.