The United National Antiwar Coalition issued the call “Back to the streets! Say NO to U.S. wars!” for Oct. 15-22, and growing protests of people answered. UNAC’s goal is to “unify in collective action against the major perpetrator of war and injustice in the world: the U.S. government, along with its allies and proxies. (unacpeace.org) 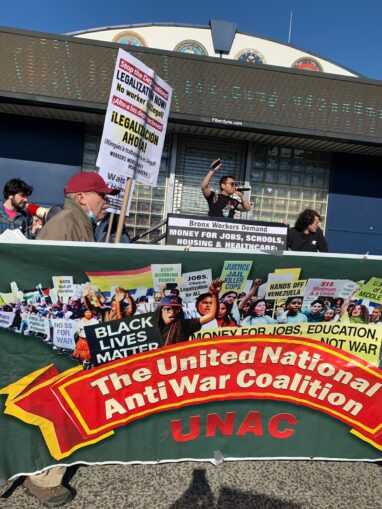 The actions targeted U.S. aggression anywhere and everywhere — against China, Cuba, Iraq, Russia, Somalia or Syria, from Venezuela to Palestine to North Korea — any U.S. action against any country attempting to stay independent of U.S. claws.

Continued U.S. sanctions, as well as direct and proxy wars, are assaults on the oppressed and working people inside this country and across the rest of the world. In desperate moves to maintain its slipping capitalist dominance, the U.S. continues to accelerate such attacks.

The result? Today, working and oppressed people in the U.S. face escalating costs of food and energy, growing insecurity in basic survival, the threat of recession and vicious attacks on efforts to unionize.

Yet the imperialist foreign policy — devastating the lives and livelihood of 99% of the people — has been getting little attention during the current run-up to the U.S. elections.

Despite a lack of affordable housing that has workers sleeping in their cars, the Biden administration is delivering a total of $1.6 billion in heavy and technologically advanced weapons to Ukraine, as well as brokering deals for weapons with NATO powers and nongovernmental entities. (“With high-tech weapons to Ukraine, U.S. escalates war,” Workers World, April 25)

Meanwhile, anti-migrant racism runs rampant in the U.S., with right-wing governors recently staging “show busing” of refugees from the South against Northern cities and states with sanctuary policies.

There is no acknowledgement in the election debates that the migrants are seeking refuge from brutal U.S. sanctions on countries like Cuba and Venezuela and U.S. economic policies ravaging Central American countries.

The struggle over control, pricing and access to oil is at the heart of the current conflict in Ukraine — a struggle stretching over decades. In Sept. 25, 1997, WW managing editor Leslie Feinberg wrote, “U.S. imperialism has sent a firm message to potential rivals in Europe and Asia: the vast wealth of the central Asian republics of the former Soviet Union belongs to Wall Street. At least, that’s what the generals would want everyone to believe. Six hundred twenty U.S. paratroopers flew 7,700 miles from Fort Bragg, North Carolina, to drop into Kazakhstan on Sept. 15.

“‘The message I would leave is that there is no nation on the face of the Earth that we cannot get to,’ blustered Gen. John Sheehan, commander of the U.S. Atlantic forces. The maneuvers were coordinated by NATO. . . . Thousands demonstrated in Ukraine in August against NATO maneuvers in that country.”

Now in response to UNAC’s call, actions took place across the U.S. and Canada and in Belgium, Germany, Spain, Sweden and elsewhere. Here are some snapshots.

On the East Coast

The Bronx Anti-War Coalition, in partnership with UNAC and the International Action Center, organized a demonstration in the heart of the South Bronx in New York City. The rally on Fordham Plaza centered local community leaders speaking from La Peña del Bronx, TBS New Direction and United We Stand, United We Stronger, who proclaimed, “Where’s the $60 billion+ for the Bronx?” 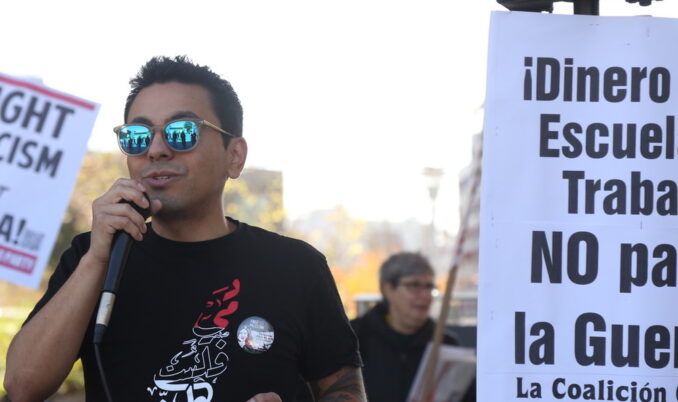 They vehemently criticized U.S. spending on the NATO proxy war against Russia at the expense of vital social services, such as housing, health care, schools, addiction treatment and refuge for people fleeing violence and instability caused by U.S. imperialism.

Protestors marched to the nearby U.S. Army Recruiting Center, where activists condemned military recruiters preying on Black and Latinx high school students through the “poverty draft.” Speakers concluded with calls to end the new cold war against China and Russia and motivated active solidarity with anti-imperialist and liberation struggles in Puerto Rico, Palestine, Haiti and Cuba. 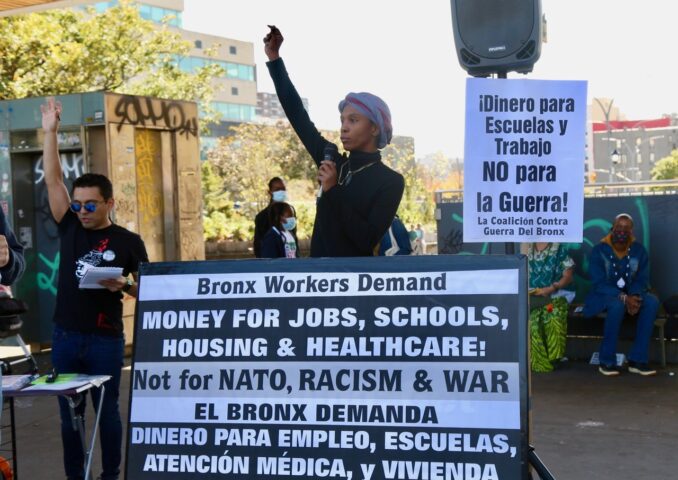 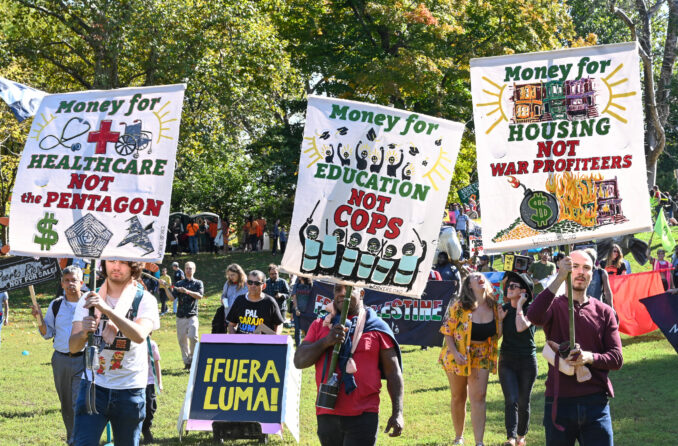 There was broad support along the winding route — from the historic Paul Robeson House to Clark Park — for the antiwar contingent and other anti-imperialist groups.

In Portland, Oregon, an impressive group of protesters rallied at the Art Museum and marched through the city to hear from additional powerful speakers at a second rally. Daniel Shea, president of Portland Veterans for Peace, emphasized: “Endless imperialist wars are taking us to the brink of Armageddon via a possible nuclear war!” He hammered the fact that “the U.S./NATO proxy war with Russia has put Ukrainian lives on the line, like pawns in an international game of chess for power and imperial full-spectrum dominance.” 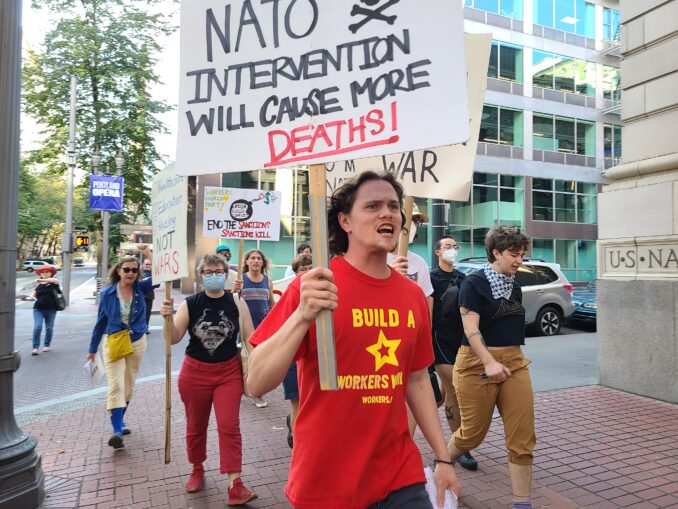 Sam, from People Organizing for Philippine Solidarity (POPS), said, “When U.S. imperialists call someone a terrorist, we need to ask ‘Who is the real terrorist?’ People who take up arms for peace and justice? Or those who profit from endless war?” Instead of funding wars, Sam said, “U.S. tax dollars could be used for housing in Portland, where about 15,000 people experience homelessness every day, or used to address the climate crisis — it’s not supposed to be 81 degrees here in October!”

Speaking from POPS, Dana pointed out that the Biden administration is pouring tens of billions of dollars into a proxy war with Russia, provoking armed conflict with China and arming countless wars globally. She highlighted how war profiteers are a small fraction of 1% of the world population; “And the rest of us, the billions of masses, have so much to gain by toppling U.S. imperialism!” The Portland march was sponsored by the International League of Peoples’ Struggle, POPS, Resist U.S.-Led War Movement, Veterans for Peace and WWP-Portland.

In front of the Federal Building in downtown Oakland, California, activists from throughout the Bay Area chanted and spoke out against U.S. endless wars. The rally, co-chaired by Jeff Mackler of the United National Antiwar Coalition and Judy Greenspan of the International Action Center, had a wide range of speakers demanding an end to U.S./NATO wars abroad and the war at home against the working class. 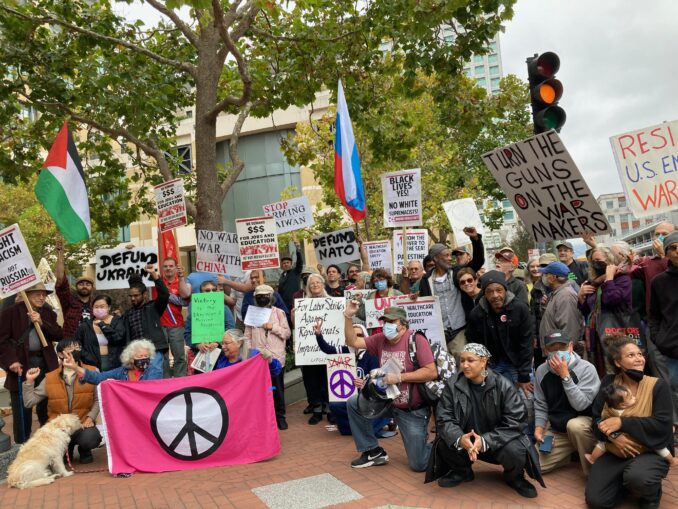 Jack Heyman, retired leader of Local 10 International Longshore and Warehouse Union and member of the Labor Action Committee to Free Mumia Abu-Jamal, tied the fight to free Mumia together with the decades-long history of Local 10 actions to stop U.S. imperialist wars.

Pierre LaBossiere, co-founder of the Haiti Action Committee, exposed the role of the U.S. in oppressing and exploiting the Haitian people. LaBossiere called on the crowd to oppose President Joe Biden’s current engineering of U.S. and European military intervention in Haiti. Demonstrators vowed to oppose all U.S. wars — from the war of police assassinations of Black and Latinx youth at home to the U.S./NATO-provoked war in Ukraine.