Nearly 85% of the Haitian people live on $5.30 a day or less. Severe malnutrition among young children is rampant, and the streets are overflowing with uncollected garbage. Potable water is scarce along with medical care — cholera, which is often spread through contaminated water, has broken out, with hundreds of cases reported in the last few weeks. 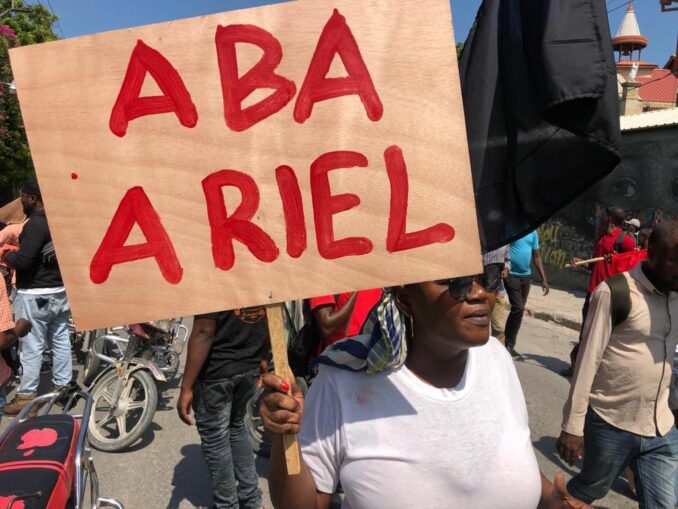 Access to education is spotty. The state has not fed or given water to prisoners since the beginning of the year, leading radio stations to run feed-the-prisoner campaigns; Haitian prisoners are dying from malnutrition.

It has been clear for months that acting Prime Minister/President Ariel Henry — appointed 16 months ago by the U.S. with the blessing of the Core Group — has not been able to control the rising, militant, hungry anger of the Haitian masses. The Core Group consists of the ambassadors of Canada, France, Brazil, Germany and Spain, along with representatives of the U.N. and the Organization of American States (OAS).

Since the beginning of August, hundreds of thousands of Haitians have taken to the streets in increasingly militant demonstrations to express their total rejection of Henry’s government and U.S. imperialism.

On Oct. 10, huge demonstrations rose up in Port-au-Prince, Petit-Goâve, Jacmel, l’Île de la Gonâve, Mirebalais, Lascahobas, Cap-Haïtien and Gonaïves. In Cap-Haïtien, a massive demonstration was attacked by cops firing live rounds. One demonstrator was shot dead; in reaction the crowd attacked and ransacked businesses, including a branch of Unibank, one of two major Haitian banks, which was set ablaze.

Since their puppet Ariel has proven to be hugely unpopular, the U.S. has apparently decided to try someone else. A Disaster Assistance Response Team is currently in Port-au-Prince. DART teams generally consist of “experts” from the political arms of U.S. imperialism, who assess “needs” and organize the delivery of “aid.”

While in Port-au-Prince, DART is meeting with Acting Prime Minister/President Henry and members of his cabinet and the political parties in his orbit. DART, it seems, is interviewing replacement candidates.

The U.S. Coast Guard has assigned its largest gunship to patrol off Port-au-Prince and conduct maneuvers with the Haitian Coast Guard, with training to interdict people fleeing the current crises on sailboats.

Ever since the U.S. used the assassination of Jean Vilbrun Guillaume Sam in 1915 — Sam was then president of Haiti — as a pretext to set up a de facto protectorate, it has selected individuals as targets, using their “perfidy” or their “evil deeds” as justification for its intervention and the destruction of the movements they led.

The U.S. current target is so-called “gangs.” A distinctive aspect of the social, economic, political, environmental and cultural crises in Port-au-Prince and other major cities — all caused by imperialism — are groups the bourgeois press calls “gangs” that have been able to gain control of some neighborhoods, either in self-defense or to use as bases for kidnapping and other extortion.

Both self-defense groups and reactionary opponents have been struggling over the control of Cité Soleil, a large, extremely poor neighborhood of Port-au-Prince, which controls access to Haiti’s main fuel terminal Varreux. The shortages in food, medicine, electricity, gasoline and public transportation caused by the interruption of access to Varreux, are being used by the U.S. as justification for an international intervention.

The billions of dollars and a decade and a half of imperialist intervention didn’t suppress Haitian resistance the last time and won’t this time. The Haitian people will fight for the right to control their own country.

There are signs of response to this threat of intervention. In New York City, Fanmi Lavalas NY and KOMOKODA called a demonstration in Brooklyn’s Haitian community Oct. 17 against “the domination of the U.S., the U.N. and the Core Group.”