On a beautiful, sunny day in New Orleans, Albert Woodfox’s loving family, members of the International Committee to Free the Angola 3, Black Panthers from around the country and supporters from around the world filled the historic Treme Center Oct. 8. They gathered in the hundreds to remember the life of Woodfox who died Aug. 4 from COVID-19 complications, just six years after he was finally released from Angola Prison. 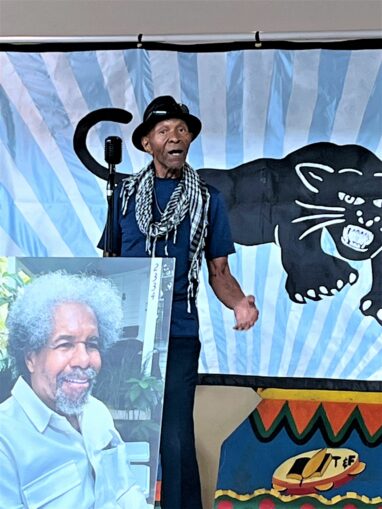 Now the sole survivor of the Angola 3, Robert King stands by a picture of Albert Woodfox. WW Photo: Gloria Rubac

As the event began, the processional into the auditorium was led by “Mardi Gras Indian and Big Chief of the Washitaw Nation” David Peters Montana, stunning in white feathers and beads from head to toe. New Orleans tradition honors the Native people who took in or hid people who escaped slavery.

Next, several dozen members of Woodfox’s family walked down the aisle, led by his younger brother Michael Mable. Black Panthers from around the country followed the family.

As the Brother of Ceremony, activist Parnell Herbert welcomed the large gathering and introduced Rheneisha Robertson, who read a moving tribute to her uncle.

Calling from prison, political prisoner Kenny Zulu Whitmore gave a touching tribute to his friend and mentor. Zulu was 18 years old when, as he explains, “I was captured by the modern-day slave catchers,” and thrown into solitary at Angola Prison. There he became comrades with the Angola 3 and joined the Black Panther Party.

“We’ve lost two of the Angola 3, two men who had beautiful souls filled with love despite the conditions of solitary confinement. Albert’s spirit was filled with joy. His spirit was unbreakable throughout the 40-plus years in solitary. I’m glad that when he left us, he left a free man,” said former U.S. Congressional Rep. Cedric Richmond.

The Sister of Ceremony, Tuere Burns, presided over the second half of the memorial.

Malik Rahim, one of the original New Orleans Black Panthers who survived a shootout with police at the Desire Housing Project, met Woodfox while both were in the Orleans Parish prison. In his tribute he spoke about the long struggle to free Woodfox and the innumerable people who fought for the Angola 3. Rahim said there were many issues that all Panthers, as well as all people, face — and a crucial one is the destruction of the environment by those who only see profits and not a healthy world for all people.

Albert Woodfox loved the outdoors, the natural world he had been denied for so many decades. The second page of the memorial program has a large photo of Woodfox with an enormous smile, holding a fish he caught.

The surviving member of the Angola 3, Robert King, was given a standing ovation as he spoke.: “Albert believed in democracy, a color-blind democracy. Anyone who tells you they are living in the U.S. in a democracy; that is not true. Look around this room — people of every human hue. This is the humanity Albert loved.”

A good number of the speakers during the three-hour tribute were Black Panthers. Besides Rahim, they included Bill Jennings from Sacramento, California, John “Bunchy” Crear from Houston and Yusef Omowale from Chicago.

After the memorial, Woodfox’s family released Woodfox’s ashes into Lake Pontchartrain, where he swam as a child.

Herbert told Workers World “Albert didn’t want a funeral with people grieving and crying, so this was planned as a tribute to honor him and celebrate him. He grew up down the block from the Treme Center; the Treme neighborhood was one of the first African American communities in Louisiana. Albert would have liked that we gathered in his home.”

After Woodfox was released Feb. 19, 2016, on his 69th birthday, he and King spoke to countless audiences all over the world at universities, in community centers, to federal judges and school children.

Woodfox did innumerable press conferences and media appearances. He co-founded the Louisiana Stop Solitary Coalition, which has over 500 members. In 2019 he published “Solitary: Unbroken by Four Decades in Solitary Confinement,” a biography telling the story of his youth, his politicization and relentless activism. The book was a Pulitzer Prize and National Book Award finalist.

Woodfox is survived by his four brothers, his life partner Leslie George, his daughter Brenda Poole, three grandchildren and four great-grandchildren. He will be missed by hundreds of family and friends and the countless people he never met who are inspired by his life story.

As his brother Michael said, the way to honor Albert is to continue his work to end solitary, exonerate those wrongfully convicted and fight to end mass incarceration.