The dangers of working for megacorporation Amazon are now well-known: repetitive motion injuries to workers monitored for measurable, robotic movements; serious urinary tract infections in workers denied sufficient break time to get to a bathroom; heat exhaustion; heart attack; loss of pregnancy while on the job. Six workers died recently after management refused to evacuate the warehouse, even as a tornado bore down and hit. And on and on. 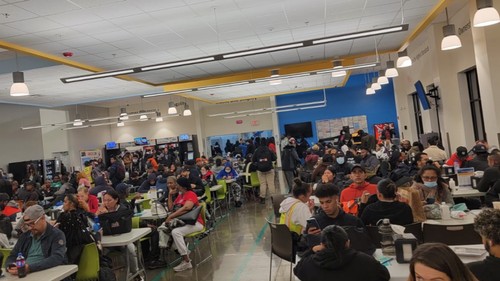 According to an Occupational Safety and Health Administration report issued in May, worker injuries increased 64% in Amazon warehouse and logistics facilities in New York State from 2020 to 2021 — based on the company’s self-reported data. A shocking 89% of the injuries were so serious, the workers couldn’t continue at their job assignment. (tinyurl.com/4bk7y42b)

One terrifying and omnipresent danger of Amazon work — in facilities crammed with thousands and thousands of cardboard shipping boxes — is fire. During the week of Oct. 3, three different Amazon facilities, in New York State and Alabama, had serious fires.

At a unionized Amazon warehouse

On Oct. 3, at JFK8 in Staten Island, New York, a shipping dock compactor went up in flames. JFK8 is the first-ever U.S. unionized Amazon warehouse, organized by the Amazon Labor Union, which won a union representation election in April.

Fumes filled the building; and though managers sent the day shift home, the night shift was required to sign in and work, despite no proof the building was safe.

About 650 workers marched in protest and occupied the break room to strategize. After no response, 100 defiant workers occupied management and human resource offices. They issued demands that the company put workers’ lives before profits, make raises that keep up with inflation and recognize the ALU. This was in effect a stay-in strike, recalling the sit-downs of the 1930s. (tinyurl.com/46hraen2)

On Oct. 4, Amazon suspended about 100 workers, including ALU’s entire JFK8 executive board and other worker leaders. Amazon continues to refuse to recognize the ALU.

During the organizing drive, Amazon argued there was no need for a union, because the company had an “open door policy” to address worker concerns. In a Twitter post, the ALU noted: “Hundreds of workers used it at once, and we were all threatened and suspended.” (@amazonlabor, Oct. 6)

Another fire broke out the evening of Oct. 5 at ALB1 warehouse in Schodack, near Albany, New York. This time an Amazon spokesperson stepped in to say that “out of an abundance of caution,” the company had sent night-shift employees home with pay and canceled the next day shift with pay. (tinyurl.com/5dbs59rz)

This phony “caution” was like a transparent mask to hide the company’s union-busting brutality. ALB1 workers are scheduled to vote later in October on representation with the Amazon Labor Union.

Anticipating that vote, management tried to woo workers with false compassion and a day off with pay, in the face of a dangerous fire. Amazon’s callous response to the JFK8 fire shows its true attitude toward workers.

Meanwhile at the Madison HSV1 warehouse, near Huntsville, Alabama, a fire broke out Sept. 27. Then when workers returned Monday, Oct. 3, a worker said: “Our plant caught on fire again. This time it was in the same area, but it was a couple aisles over. . . . We opened up Sunday after being closed for almost a week [after the last fire]. You could still smell smoke in there. Half the warehouse was off-limits.”

The worker noted he and others felt fear, mistrust and “a majority of us, we don’t feel safe.” (tinyurl.com/3w2xfuep)

The current drive to unionize Amazon began in 2021, at the Bessemer, Alabama, warehouse. These fires make it clear again that the only way for workers to stay safe and protect themselves on the job is through union strength and solidarity with each other.