Beginning in late August, on the date commemorating the start of the 1804 revolution that liberated Haiti, hundreds of thousands of Haitians throughout the country have repeatedly taken to the streets to demand that the regime of acting President Ariel Henry be uprooted — a process Haitians call dechoukaj. 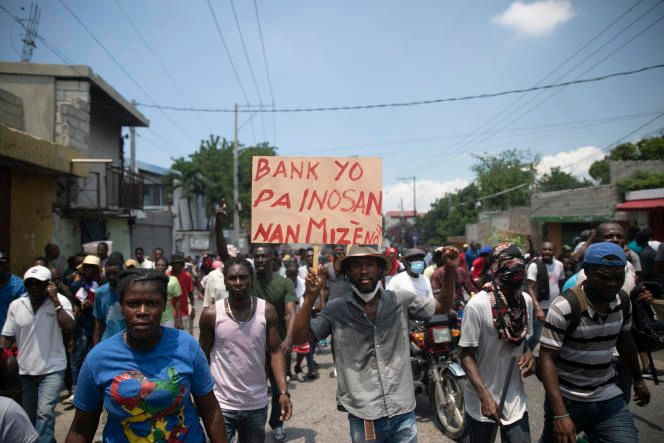 Translation for sign in Port-au-Prince: ‘Don’t push people into misery.’

In general the protests demand an end to the misery that the huge hikes in the price of fuel — gasoline and diesel — has engendered. The government sets these prices and has raised them twice since Henry took over — the price of gas is up by 128%; kerosene and diesel are up 90%.

Most Haitians live on less than $2 a day. Inflation rising by 30% means that more are going hungry.

Biden at the U.N.

While the protests started out peacefully, as the weeks progressed they were more and more marked by violent outbreaks. Demonstrators targeted banks and blocked roads with burning tires and sacked warehouses. When the cops tried to break up demonstrations with tear gas and rubber bullets, protesters responded with rocks and bottles.

At the U.N. Sept. 22, President Joe Biden said, “We continue to stand with our neighbor in Haiti, as it faces political-fueled gang violence and an enormous human crisis. And we call on the world to do the same. We have more to do.”

Two points should be made: Almost all the violence being perpetuated in Haiti is fueled by the 500,000 weapons imported — mostly illegally — from Florida. If the U.S. government were truly concerned about violence in Haiti, federal agencies need simply enforce U.N. embargoes on exporting weapons to Haiti.

Washington shows no sign it will commit to a plan to even alleviate the current crisis. Daniel Foote, senior U.S. diplomat and special advisor to Biden on Haiti who resigned when Biden’s administration began deporting thousands of Haitian refugees at the end of July, has, along with Dominican President Luis Abinader, publicly pushed for the U.S. to intervene militarily. Currently the number of Haitians who have been deported is over 20,000.

While Haiti doesn’t have the ability to resist a U.S. military incursion, its political history shows that it has a deep-rooted, long-standing opposition to any form of neocolonialism. In the 15 years of U.N. intervention in Haiti from 2004 to 2019, it was unable to overcome this resistance and set up a stable regime.

There is an economic development company called CODEVI (an acronym from the French version of Industrial Development Company), located in Ouanaminthe, twinned with the Dominican city Dajabón. CODEVI employs over 20% of the production workers in the country. (HaitiLibre, Sept. 29)

On Sept. 29, some Haitians were trying to get into Dajabón, and they got into a scuffle with the Dominican border authorities, who then called in the Dominican army. Videos uploaded to Twitter show armed Dominican soldiers patrolling the streets of Ouanaminthe, while the sound of gunfire can be heard. HaitiLibre and the Haitian Times report some arrests were made.

The sensitivity to foreign troops on Haitian soil is clear.

Prisoners in Haiti are starving

About 80% of prisoners in Haiti are awaiting trial. A report to the U.N. in the last week of September states that 50 or so deaths in Haiti’s prisons in September were due to “malnutrition,” from not having enough food.

There was a jail break in the only women’s prison in Haiti at the end of September. The prisoners tied up the guards and escaped, after cops from the local police station coming to retake the prison ran into a roadblock and lost the ensuing firefight.