Residents in 69 low-income housing units at the University City Townhomes in West Philadelphia received welcome news Sept. 23. Their pending Oct. 8 eviction date was moved to Dec. 27, after the property owner IBID Associates applied for an extension of their federal contract with Housing and Urban Development. 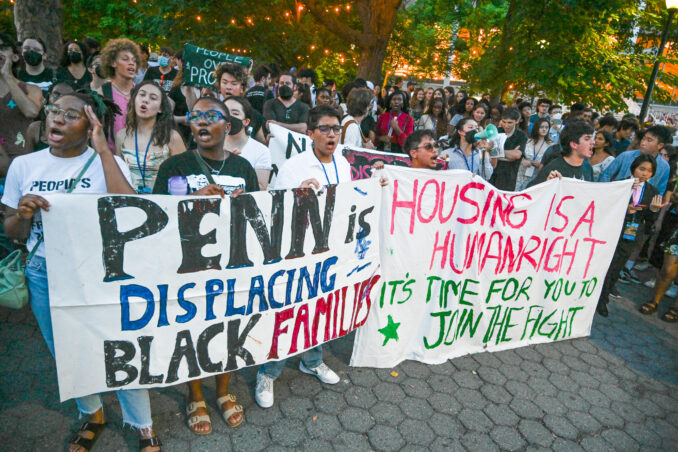 Residents first learned of plans by the owners to discontinue a decades-long contract with HUD July 8, 2021, and to evict all residents by July 8, 2022. If residents are evicted, IBID wants to demolish the buildings, and sell the land for $100 million to developers.

The residents, with growing community support, have put up an impressive struggle, now forcing the owners to postpone the evictions for a fourth time. They are making it clear; they don’t plan to go anywhere.

Each win by the residents of what they call the “Peoples Townhomes” has come with broadening support and growing national attention to this fight-back by a predominantly Black and Brown low-income community.

After the first eviction date extension, Save the UC Townhomes Coalition set up a creative tent encampment on July 9 to drive home what their future would look like if evicted. Hundreds of individuals, and community groups responded. City labor unions called on their members not to carry out any evictions. It took the cops — in this case sheriffs — to comply with the landlords’ orders to tear down the tents on Aug. 8.

When two UPenn students who supported the protest were subsequently brought up on disciplinary charges by Magill, 73 UPenn faculty members issued a letter in their support.

Following a celebratory press conference and rally at City Hall Sept. 7, Save the UC Townhomes led a march to the Pennsylvania Academy for the Fine Arts, where demonstrators crashed a fundraising event for the Building Industry Association of Philadelphia Political Action Committee. Several local politicians were caught there hobnobbing with the major developers, gentrifiers and bankers.

Two city council members subsequently issued a previously prepared statement calling for a one-year extension of the federal contract between IBID and HUD.

Recently, AFSCME District Council 47, representing thousands of city workers, issued a strong resolution supporting the Townhomes residents’ demands and calling on the City to use its resources to “ensure that properties which are subject to expiring HUD contracts in the coming years are maintained as affordable, subsidized housing for those who are low income or very low income.”

UC Townhomes residents are calling on the city to arrange to purchase the block where their homes are located and for their homes to be made permanently affordable. If they are forced to leave, they want a two-year eviction extension.

The struggle by UC Townhomes residents to remain in their homes is forcing a discussion about what constitutes “affordable housing” and how little is available in major cities like Philadelphia. The city’s failure to maintain an aging housing stock was even the topic of an op-ed in the Inquirer on Sept. 22 by Philadelphia Housing Authority President Kelvin A. Jeremiah, who admitted that 14,500 affordable Section 8 housing contracts are at risk of expiring over the next decade.

The problem is not that fewer homes and apartments are being built. It is that older housing construction, like the UC Townhomes, is being torn down and replaced with new boutique condo towers, which offer fewer and considerably more expensive units than what they replace.

Backed by investments from Wall Street and other financiers, the building industry has turned to luxury high-rise condominium construction, rather than expanding housing opportunities for low-income families. Even when developers agree to set aside a certain percentage of units as “affordable,” their concept of affordability totally excludes low-income families.

Builders claim that the price of land, the higher cost of construction and the shortage of building materials forces them to turn to the luxury condo industry, but in reality it’s pure greed.

Often the luxury boutique structures contain far fewer individual units, but they are built considerably taller than the low-rise buildings they replace, meaning more building materials are needed, and the developer can charge more.

The New York Times gives several examples of this in an article: “Taller Towers, Fewer Homes” by Stefanos Chen, Sept. 23. In one example sited at 1165 Madison Avenue in Manhattan, a developer constructed a new tower consisting of 13 stories with 11 units. The developer could have constructed 88 moderate-income units with fewer stories at the same site.

Under capitalism, there is little incentive for developers to build more units, when they can get higher prices and pay less for labor and materials for fewer but larger luxury spaces. Land and resources that could be used to house more people are being used instead for the super-wealthy, as developers chase the best return on their investments.

UC Townhomes residents are waging a fierce battle against IBID’s plans to sell the property for millions of dollars to a developer who will most likely follow the example of the Manhattan builders.

The struggle over housing is a class struggle, with low- and moderate-income workers fighting the wealthy ruling class, which has disposable income gained from exploiting the labor of the global working class. The ultimate solution lies with a revolution to overturn capitalism and replace it with a society that prioritizes human needs — socialism.