Amazon, with its notorious multibillionaire owner Jeff Bezos, is universally known as one of the world’s largest union-busting conglomerates. It is well documented that workers there have passed out due to heat and suffered physical injuries, mental anguish and other horrific working conditions that accompany the frenzied pace of packing, loading and delivering packages. If this wasn’t bad enough, along comes another shocking strike against Amazon to add to its already long list of criminal behavior. 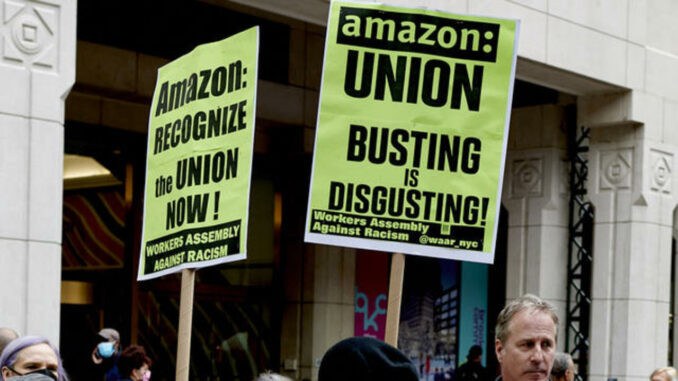 On Sept. 12, Amazon hired a former manager from one of the largest private prison corporations as its new director of worker training programs. Dayna Howard was once a “quality assurance” manager for the Corrections Corp. of America between 2000 and 2005. CCA, which became CoreCivic in October 2017, is a Wall Street company that runs 65 state and federal prisons and detention centers in the U.S., all for profit.

In 2021, CoreCivic made close to $2 billion in revenue from mass incarceration, a heinous form of wage slavery. Howard stated on her LinkedIn page that she coordinated facility audits both internally and externally and developed a “Receiving and Discharge Training program” that “revamped inmate admission process and revised all processing documentation. Resulted in a 20% reduction in inmate processing time and a reduced error rate.” In other words, she was very efficient in ensuring that prisoners and detainees were checked into a facility in a timely manner.

This is not Howard’s first job with Amazon since coming to work for them in 2012. She headed up their global security and loss-prevention programs. The latter job criteria was to make sure that no Amazon worker or contractor confiscates products from warehouses. In other words, Howard was Amazon’s top spy and cop.

Amazon has had a close relationship with police departments in setting up sting operations and doorbell surveillance cameras to deter people from taking deliveries ordered by others. One can only imagine how many billions of dollars Amazon invested in these programs to police their products and their workers.

Now Howard’s latest job description is to head up the learning and development team, Amazon’s internal training program for all warehouse workers. Amazon states that this program is about “improving the everyday experience of our associates. We design and deliver learning programs to guide and support employees’ career paths inside Amazon and implement improvements that make a real difference for both our workers and our customers.” (vice.com)

If no one had a clue what Amazon’s sordid history is, this description comes off sounding like a positive development. It is not. How can any progressive person think that a former prison official — which Howard is — has the mindset of treating workers with dignity.

Amazon was hoping to keep its workers invisible like prisoners, but not even the hiring of a former prison official can stop the march forward by this work force. They, along with others like Starbucks’ workers, are letting their voices resonate regarding their right to organize and be treated with dignity and respect.