As the deadline for a national railroad strike loomed, President Joe Biden and U.S. Secretary of Labor Marty Walsh hammered out a tentative agreement between the rail freight bosses and those railroad unions which had not already agreed to a contract. For now, this maneuvering has averted a strike that was set to commence when a 60-day “cooling off period” — ordered by the federal government — concluded Sept. 16. Union members have not yet begun voting on the contracts. 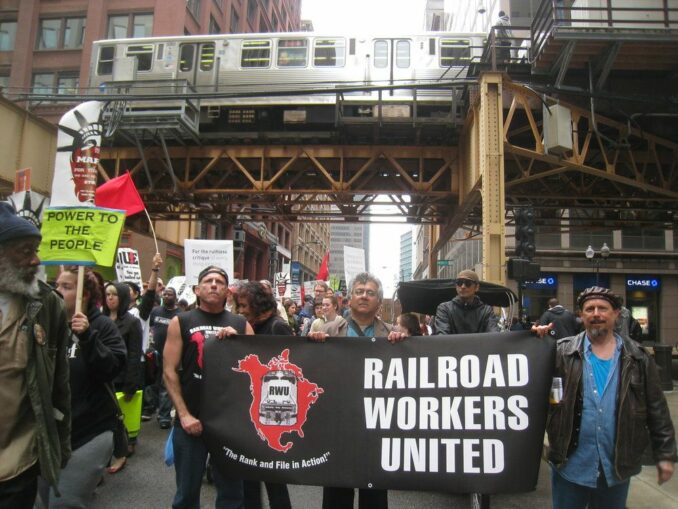 Railroad Workers United, an interunion, cross-craft solidarity caucus of rail workers and supporters from all crafts, carriers and unions across North America, march beneath the “El” in Chicago, 2013.
Credit: Steve Desavouret

At the heart of the impasse between the two sides was a ruthless absenteeism policy, which, combined with excessive mandatory overtime, pushed workers into working while sick, including with COVID-19, skipping doctor visits and missing family events.

The consequences have been devastating and even fatal, as in the case of Aaron Hiles, a 51-year-old BNSF Railway worker. Hiles scheduled a doctor’s appointment, after he “felt different,” but canceled it when he was called in to work, fearing penalties under the company’s recently introduced attendance policy. Hiles suffered a fatal heart attack June 21 while at work on a freight train.

To maximize worker efficiency and productivity, capitalists often impose harsh attendance requirements that rely on the fear of discipline and discharge. This writer, a union autoworker for 31 years, recalls the absenteeism procedure at Chrysler, now Stellantis. After so many “occurrences,” a worker was given a “disciplinary layoff,” followed by firing after additional occurrences. There were almost zero exceptions; even most medical appointments counted as occurrences.

The railroads’ policy, considered by unions to be the worst in the country, is even harsher. Workers are given a certain number of “points.” Points are deducted for missing work regardless of circumstances, with a low point balance leading to warnings and then firings. But a worker who agrees to be on call for 14 consecutive days can build their point balance back up.

Rail companies such as Union Pacific and BNSF have adopted a cost-cutting model known as Precision Scheduled Railroading (PSR). Shipping processes, equipment and, most importantly, the labor force are streamlined to control the “operating ratio” — the relationship between a company’s costs and its revenue, i.e., the rate of profit. When the number of workers is held to a minimum — in this case by an extreme, PSR-driven attendance policy — profits are higher.

The federal Surface Transportation Board estimates that freight carriers have cut 30% of their workforces over the past six years. In 2021 BNSF made $6 billion in profit, and Union Pacific made $6.5 billion, both an increase of 16% over the prior year.

The rail bosses did not want a disruptive strike, nor did the capitalist class as a whole, as its business depends on rail transport for the movement of raw materials and finished products. Walsh and Biden were working at the bosses’ behest, despite all their nice talk. “The Biden Administration applauds all parties for reaching this hard-fought, mutually beneficial deal,” Walsh babbled after working 20 hours round-the-clock to secure the tentative agreement.

In fact the deal is limited in how “beneficial” it is to union members. The contracts contain new language so that workers can take time off — without pay, of course — for medical conditions. But other circumstances, such as unexpected car trouble or attending a child’s sporting event or school play, can still cost a worker points.

Pay is raised 24% over five years going back to 2020. While that looks like a lot of money, it doesn’t keep up with today’s rampant inflation. And the more important question is this: How do you put a price on one’s health — or in the case of Aaron Hiles, one’s life?

It’s entirely possible that rail workers will reject this government-brokered deal. As Gabe Christenson, co-chair of the rank and file-led group Railroad Workers United, tweeted after the deal was announced: “A full-blown strike is still a distinct possibility this Fall.”