Saladin Muhammad, a revolutionary Black union organizer and propagandist, died on Sept. 19 in Rocky Mount, North Carolina, at age 76 after a long illness. The writer is the International Representative of the United Electrical Workers (UE) 150 and a founding member of the Durham branch of Workers World Party who worked with Muhammad for many years. 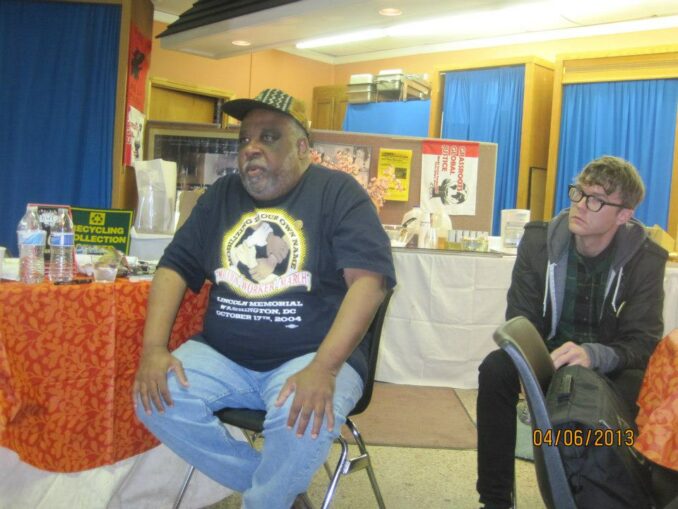 Saladin Muhammad’s contributions to the global struggle for Black liberation and against capitalism and imperialism are too numerous and profound to ever fully capture. His revolutionary commitment and practice have greatly influenced the direction of the U.S. labor movement, in particular in challenging all of us to understand the critical role of the U.S. South in the global working-class struggle.

His countless writings and speeches about the central role of the Black working class to help end exploitation for all those who toil, have left a permanent mark on our social movements.

Saladin endlessly challenged all of us to think more critically and to work more strategically. Every space that he was in, Saladin’s gentle yet firm perspective was always the sharpest in the room.

Saladin’s life practice to carry out the slogan of Unity-Struggle-Unity captures much of his nuanced insights. It would be hard to find any union organizer that could fully put to practice the teachings of Chairman Mao or Vladimir Lenin in the context of the U.S., and specifically the U.S. South, better than comrade Saladin.

He may have not quoted all the teachings of revolutionary proletarians from around the world at a mass meeting, but certainly the message he conveyed to any crowd always found a way to bring everyone in the space much further along the path toward that same end.

Saladin, as part of the African People’s Party, helped motivate a political and organizational decision to send cadre down South. He moved from Philadelphia to the Black Belt Eastern North Carolina in Rocky Mount in the early 1980s. In doing so, he didn’t just move on his own.

His perspective to develop the leadership of Black workers, within a social movement and social union context, won over many other Black revolutionary socialists of the time, from many different political tendencies, to join his efforts and also move to North Carolina. A few years later, Black Workers for Justice was founded under his leadership.

He also later founded the Black Workers League, a revolutionary nationalist Marxist Leninist tendency that fought for Black self-determination, a cornerstone of the struggle against U.S. imperialism for national liberation; women’s emancipation; workers power; and revolutionary social transformation. He led a major struggle inside the Black Liberation movement at the time about the critical importance of organizing at the point of production and service in the U.S. South.

Within a couple years, Black workers at multiple factories throughout that area of Eastern North Carolina were organized through the Rocky Mount Workers Unity Council, sponsored by the Black Workers for Justice. This helped bring a basic level of organization and solidarity to workers from these plants who were fighting for fairness and waging shop floor struggles against the boss.

Learning from the experience of various international unions having lost several National Labor Relations Board union recognition elections in the local area, Saladin, being the true dialectician that he was, helped develop the practice of pre-majority unionism.

The bulk of the labor movement at that time did not support such efforts, thinking it would not ever be consolidated into a powerful enough force to ever win concessions from the boss and build organization. Through Saladin’s efforts over 35 or more years, he proved them wrong.

Saladin later became an organizer with the United Electrical, Radio, and Machine Workers of America (UE) helping on many Southern organizing campaigns at General Electric and Westinghouse plants. Meanwhile, back home, Saladin was supporting the efforts of his BWFJ comrades to organize workers at several facilities. This eventually led to the founding of the Carolina Auto and Aerospace Machine Workers Union (CAAMWU), which formally affiliated with UE in 1994, after having won a successful campaign at the Rocky Mount Cummins Diesel engine plant to secure a paid Dr. King holiday.

After the UNC Housekeepers Association filed a lawsuit alleging racism and low pay against the University of North Carolina at Chapel Hill in 1997, Saladin and his comrades were able to successfully turn that lawsuit into a statewide organizing campaign. This effort targeted mostly Black housekeepers, groundskeepers and food-service workers at the UNC System’s 16 universities and later established UE Local 150, the North Carolina Public Service Workers Union.

This was a critical step in demonstrating how workplace cadre must not just be focused on one workplace at a time but “must see themselves” (as Saladin would say) as part of a broader workers’ movement in their industries or at their employers across entire regions or states.

Saladin would continue to educate the labor movement by attending labor conferences and organizing workers speakers’ tours across the country speaking about the importance of organizing the U.S. South and the need for new labor organizing models, such as social justice pre-majority unionism.

Saladin worked to assist in convening the Million Worker March in October 2004 in Washington, D.C. This March was a powerful expression of uniting the Black mass movement and workers struggle into a common political arena, by bringing together Black leaders of several militant labor organizations across the country, such as the ILWU (International Longshore and Warehouse Union) Local 10 in San Francisco.

The MWM issued a comprehensive workers program of “mobilizing in our own name” demands that challenged the predominant “Anybody but Bush” liberal mentality of the time, which was sick of wars and living conditions caused under the presidency of George H. Bush.

Saladin played a decisive leadership role in the strike of City of Raleigh sanitation workers in 2006 and wrote a powerful pamphlet summing up the critical leadership role of Black workers. He later helped give guidance to municipal workers organizing across North Carolina that eventually established additional UE 150 union chapters in Greensboro and Charlotte.

When the Democratic National Convention was planning to be held in Charlotte in September 2012, Saladin played a critical role in working with comrades in Workers World Party that formed the March on Wall Street South, to call for a major regionwide gathering of oppressed workers to speak out on the opening day of the convention on Labor Day.

This led to the founding of the Southern Workers Assembly, which Saladin guided until his death, giving direct guidance and input to the strategic thinking around how to build local workers assemblies.

A few years later Saladin would also author, on behalf of the SWA and with support of the Savannah Central Labor Council, a resolution that was to be passed at the National AFL-CIO Convention in support of organizing labor in the South. Such a resolution had not been passed in many decades.

After the right-wing takeover of the North Carolina General Assembly in 2010, the Dr. Rev. William Barber and the state NAACP played a critical role in convening mass actions at the state Legislature every Monday, which ignited the Moral Monday Movement.

Saladin played a critical role in ensuring that workers organizations had a clear voice and presence in these actions and organized the day of civil disobedience, where union members from nearly a dozen unions got arrested challenging the state government’s efforts.

Saladin’s brilliance and steadfast warrior spirit have energized millions to think bigger and to act more decisively. His spirit lives on in our social movements and will be present until our final victory has come.